Irani hotels struggle in Hyderabad too 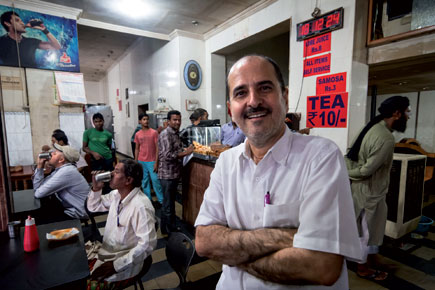 Irani hotels struggle in Hyderabad too


Irani restaurants are a slice of Hyderabadi life, and brought some grand dishes down from the high table of the Nizam to the common man. They were opened by intrepid Persians who came to the city in the early part of the last century. But like in Mumbai and other cities, these restaurants are struggling to survive. They are losing the race to, as locals say, “bandi and brand’’. ‘Bandi’ is Telugu for street food. Brands refer to Indian and multinational food chains.

“Though we are squeezed between bandi and brand, we maintain the taste of our tea, biryani, Osmania khara biscuits and samosas,’’ says the genial Mohammed Hussain Yawari, a second generation entrepreneur who owns New Grand Restaurant and Bakery, established in 1946.

“I visit these restaurants for chai, baataan aur biskoot (tea, chit-chat and biscuit),’’ says Hamidullah Khansaab, a 75-year-old man, using a dialect called Daccani or Hyderabadi Urdu. He comes to New Grand every afternoon to meet old friends. They spend an hour in the cosy ambience of old wooden furniture, whirring overhead fans and familiar food. The golden rule here is no one disturbs patrons till they decide to leave on their own. New Grand has another loyal customer who comes every week to buy a dozen samosas worth Rs 36. “His autorickshaw fare costs him Rs 90,’’ Yawari says.

Irani eateries have discontinued many items on their menu over the years as they could not keep prices affordable. The New Grand’s highlight is the Irani haleem sold during the month of Ramzan. The question is how much longer it will be available. “Most Iranis in Hyderabad have closed down due to high rentals and manpower problems. We cannot keep our prices low any longer. Also, the next generation is not interested in the family business, as they are doctors, engineers and other professionals.”

“Now, only a handful are surviving and I can already sense their decline,’’ says Yawari grimly.