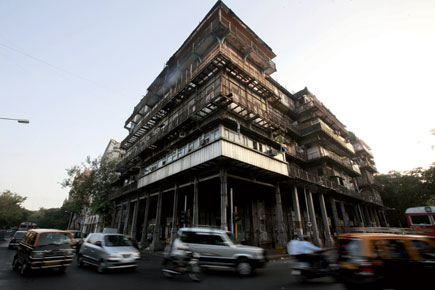 
According to urban lore, this was the place Jamsetji Nusserwanji Tata was turned away from, leading him to open his own hotel, the iconic Taj Mahal Hotel. We don’t know if that is true, but ironically, the latest owner of the erstwhile Hotel Watson bought the building from the Tata Group 30 years ago.

The Watson Hotel used to be a Whites-only bastion in Bombay. Mark Twain stayed there once and it was the first place in India to screen a movie, though only Europeans saw it. It is also India’s oldest cast-iron building. Located in the Kala Ghoda district, it is now known as Esplanade Mansions and houses offices of advocates and builders. As you take a walk around, it’s hard to imagine what it was like before—home to the rich and famous who danced in its grand ballroom and could almost think of themselves as being not in Bombay but London. The balconies which surrounded the hotel and formed a part of its design have vanished. Only the wrought-iron structures on the top floor offer any inkling of how grand it must have been. It was said that Watson was the first building sailors could see as they approached Bombay. Along with hosting beautiful balls, the hotel was rumoured to have witnessed quite a few suicides as well, with depressed souls throwing themselves off its balconies.

Sadiq Ali, the real estate developer who owns the Watson, says that the Grade II-A heritage building will last another 50 years. He is alluding to controversies over the building’s conservation and restoration. “There was a delay as MHADA was asking for the building to be emptied out while they carried out the work. I said that’s not possible. We asked that they do the work part by part. They have agreed and things are underway,” he says. Ali says that the building needs restoration again because the work done by the repair board 15 years ago was not up to the mark.

“Unlike what people are saying, it’s not going to fall down. I have had three engineers check it out. And it’s sturdy. Only some minor repairs are needed on the sides and some major ones behind the building. Some original pieces will be replaced as they are long gone.”