He Does a Fines Job

This ticket checker’s eye for spotting ticketless travellers has made him the highest individual revenue earner for Indian Railways. 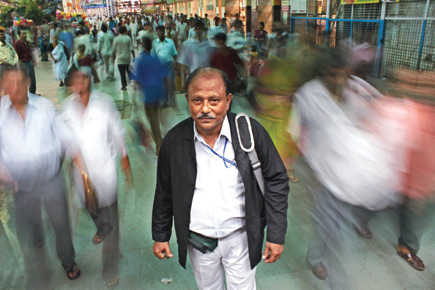 This ticket checker’s eye for spotting ticketless travellers has made him the highest individual revenue earner for Indian Railways.


There’s no escaping Goutam Basu’s eye if you’re travelling without a ticket. The 60-something, bespectacled and balding Deputy Chief Ticket Inspector at Eastern Railways’ Sealdah Division holds the record for being the highest individual revenue earner for the Indian Railways by collecting lakhs of rupees as fines every year.

Last year, Basu recovered nearly Rs 6.3 lakh and in March alone this year, he added Rs 1.05 lakh to the Railways’ coffers. Basu checks tickets, and also books vendors and others with excess luggage, at the exit gates of the Sealdah railway station, where millions disembark from suburban and long-distance trains daily. He’s also assigned to check tickets on board trains. His colleagues say Basu has an uncanny eye for detecting ticketless travellers from a distance. He barely gets a target wrong: very few he accosts have ever produced a valid ticket. “It has come from practice. After all, practice makes a man perfect,” says a modest Basu.

Basu is a boxer, though he does not use this particular skill on any errant passenger. His seniors describe Basu as sharp, polite and extremely patient, traits that have helped defuse many an ugly situation. There have been times when groups of ticketless travellers turned belligerent and took on Basu. “But always, honest passengers with valid tickets came to my aid. On many trains, I’m a well-known face and bona fide passengers actually assist me in dealing with ticketless travellers. People realise I’m honest, and so they help me,” Basu said.

He is also very diligent, spending hours scanning the faces and gaits of passengers. Basu has won innumerable awards, including a cash prize by the Railway Board given to any ticket examiner who deposits more than Rs 30,000 a month as penalty from ticketless travellers and those with excess luggage. “The board gives 5 per cent of any amount over Rs 30,000 to the ticket examiner. This is an automatic award. I’ve got this prize countless times, in fact, nearly every month over the past many years,” he says.

He has also received more than 20 special awards and commendations from Eastern Railway bosses. But he has one regret: “I’m sad I haven’t received the Railway Board award for the best ticket examiner for a financial year till now. I’ll retire in January 2011, and I fear I’ll never get this coveted prize.” But Basu, who is a qualified referee, as well as the manager of the Eastern Railway boxing team, need not lose hope—Eastern Railway officers have reportedly taken up his case with the Railway Board and Minister Mamata Banerjee.