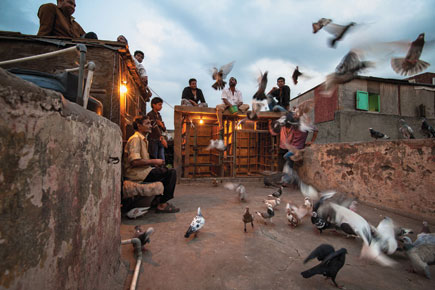 
The winding lanes of Chitli Qabar, near Jama Masjid in old Delhi, might be crowded but it is not hard to find 30-year-old Mateen Qureshi, even without an address or telephone number. He runs a 55-year-old sweet shop known as Shireen Bhawan. This is the only known shop in the capital that serves aloe vera halwa, but only in winter. He is also one of the few pigeon rearers, known as kabootarbaaz, in Old Delhi and owns the largest collection of pigeons in the area.

“I have at least 500,” he says, leading the way up a narrow flight of stairs to the terrace of a four-storeyed building in the area. The air is heavy with the smell of bird droppings and ittar. Qureshi says that perfume is sprinkled on pigeons not to douse the stink, but to help identify pigeons of different owners in the city. This is handy during competitions held on the terraces during summer evenings.

Kabootarbaazi was introduced in 17th century Delhi when the Mughals set up Shahjahanabad. It began as a communication system between spies and officials of the court. But all that is history. Its enduring remnant now is a local contest held every week in which the pigeon that flies the farthest and returns to its owner wins.

“We gather on specific terraces at least once a week and let our pigeons out,” says Abdul Mohammad, another pigeon owner from Matia Mahal. The birds follow a rehearsed route within the walled city along areas like Daryaganj, Turkman Gate and Jama Masjid. Several enthusiasts are stationed at specific points, taking stock of how far each pigeon has flown and within what time. The first pigeon that completes the route and returns to the starting point is the winner. “It takes a lot of effort to train them. I could have had more, but I pursue this as only a hobby,” says Qureshi, whose forefathers were professional pigeon rearers.

Training involves making pigeons recognise their owner’s voice while also teaching them the charted routes. This is done by dropping grains of food along the route while feeding them. One has to follow them, running or driving, during their flight along the designated route.