Abused and ailing donkeys have found a home in interior Maharashtra. Raising funds for a donkey sanctuary, though, is a problem 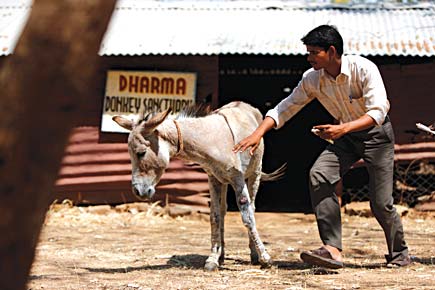 Abused and ailing donkeys find a home in interior Maharashtra


In 1966, when the late Bonny Karstadt, daughter of a Jewish World War II bombardier, went on a blind date in the US with Ratilal Shah, an electrical engineer from Gujarat, you couldn’t imagine how it would help ailing donkeys in Maharashtra.

The blind date led to a marriage two years later and then the setting up of Maharani, a brand of ethnic handmade gift items. Once the business became successful, Bonny and her husband turned to philanthropy and her other great interest, caring for donkeys. She had been inspired by the Donkey Sanctuary Movement, a worldwide initiative to champion donkey rights and care for abused animals.

Since the couple were associated with Sanskriti Samvardhan Mandal, an NGO that runs residential schools in Sagroli, a dusty village in Maharashtra’s Nanded district, they decided to establish their dream project there on 16 acres acquired from the NGO. Located at the foothills of the lush forested Bala Ghat Range, Dharma Donkey Sanctuary (DDS) is now home to seven donkeys. “We picked them up from all over the place. They were badly bruised and injured. They will live at the sanctuary as their injuries have rendered them incapable of work,” says Abhijit Mahajan, facility manager.

Besides these seven, other donkeys have also graced the sanctuary’s grounds. “Many animals are taken away by their owners following recovery, hence the numbers vary.” In the sanctuary there is plenty of grass to munch on, three bore wells offer ample drinking water and caretakers look after the animals.

Ever since DDS was inaugurated in January 2002, its awareness campaigns have helped improve the social standing of donkeys vis-à-vis other domestic animals. A couple of years ago a donkey did not even fetch even Rs 800 as sale price, today, a healthy one costs Rs 10,000 upwards in Nanded. Farmers are taking care of their donkeys ever since the awareness campaigns began.

In the three years since it was started, de-worming camps at DDS have seen an increase in numbers—about 2,000 donkeys were checked in December 2008. Some of the villagers who once abused their donkeys have become self-appointed volunteers who keep a look out for abused or ailing donkeys and inform DDS.

The nine-member trust is keen on upgrading facilities. A Rs 27-lakh proposal has been sent to the Central government for construction of donkey shelters and a well-equipped hospital. But funds are a problem since no one understands the rationale behind a sanctuary for donkeys. There is also lack of veterinarians experienced in donkey care. DDS operates through two in-house veterinarians who do not have the means to keep themselves updated. “There are no doctors in the state who specialise in donkey diseases,” says Mahajan.