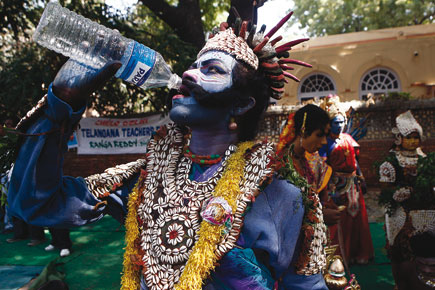 
While Andhra Pradesh’s politicians go on fasts and provoke students to brave police bullets for the un­born state of Telangana, the villagers of Warangal, an Andhra district, took a unique route for the cause.

On 19 January, heavy-drinking villagers in Khilashpur took an oath to keep off liquor until Telangana is formed. The village is 170 km from Hyderabad and has a population of 3,000. “Our objective is to deny the Congress-ruled state government the revenue it gets from liquor sales. On average, village booze shops register sales of Rs 5,000 per day which translates to Rs 1,200 as government revenue,” says village sarpanch Vudugula Prabhakar. The movement has found solid support from women voters. “We will not only save money, our husbands’ health will also be better,” says one housewife.

According to government estimates, the ten Telangana districts together contribute Rs 3,000 crore from liquor revenues per annum to the exchequer. The arid region also has the dubious distinction of being the largest beer guzzler.

The campaign to keep off liquor in Khilashpur took off at the height of the pro-Telangana movement last year and garnered about 100 supporters. The idea was taken from a Hyderabad-based software engineer who said, “Instead of committing suicide, students and people should give up drinking in favour of the Telangana cause.” It was reported widely in the local press.

The campaign hit a high note this week when all alcohol consumers in the village came  together and vowed to keep away from spirits till a separate Telangana is achieved.

“We will celebrate only then,” says Suryanarayana, a student who took part in the effort to convince locals. They are aware that it has taken more than 50 years for the Centre to acknowledge that Telan-gana could be carved out of Andhra Pradesh. “We are prepared to keep away from spirits as long as it takes,” they say rather bravely.

Prabhakar says Khilashpur was once the flag-bearer of the self-rule movement under Sarvai Papadu who fought the Nizams. “Now, we will show the government that we are no pushovers and that our fighting spirit is still intact,” he says.