A Taxi for Tommy

A cab service for pets gets going in Bangalore 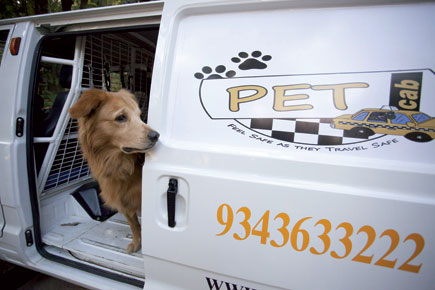 A cab service for pets gets going in Bangalore

We have spread of people who go unusual lengths to pamper their pets, but a taxi service? In Bangalore, that is now a reality. A service started this new year offers owners the facility to dial a cab to ferry their pets.

Santosh Shekhar, the man who has set up Pet Cabs, says he was partly inspired by watching a dog lover dropping off his terriers at a boarding kennel in his car. “The family was getting annoyed at their dogs, who were trying to bite the seats. They had also dirtied the expensive car,” he says.

Pet Cabs have three Maruti Omni vans with a partitioned driver’s enclosure giving ample space for the pet in the back. There is no upholstery in the pet area. Smaller and ferocious pets can also be transported in a modified cage or carry bag. Each van has a first-aid kit, leashes and other safety features.

“We are already getting three-four pick-ups per day. There is a seat for one person to sit alongside pets at the back. Either the owner or our trained assistant has the option to sit in the front seat,’’ he says.

A taxi service for pets is not just a luxury. Autorickshaw drivers either refuse or charge extra to ferry pets. Then, there is the constant fear of the animals jumping out in fast moving traffic. Pet Cabs charges a minimum of Rs 100 for four km, and Rs 23 per km thereafter.

The service was started on 5 January, and Shekhar says it is already doing well thanks to word-of-mouth. R Chakroberty, who lives in the infotech hub of Electronics City, is moving out of Bangalore and is looking for her dog to be adopted. She got Pet Cabs to take the dog to the new owner’s home to familiarise it. Next week, she has an appointment with a veterinarian for a minor surgery. The pet will have to be picked up the next day and a week after delivered to its new owners. “She has booked our service,’’ says Shekhar.