If you want the services of Chennai’s M Samson, all you have to do is log on to tuktastic.com. 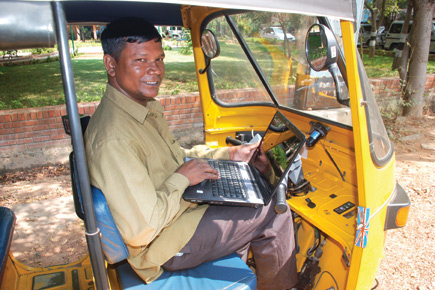 If you want the services of Chennai’s M Samson, all you have to do is log on to tuktastic.com.


There’s no way to confirm it, but M Samson may quite possibly be the only autorickshaw driver in India with a website of his own. The services of this 38-year-old semi-literate, who also doubles as a tourist guide, can be booked online by any Chennai visitor who logs onto tuktastic.com.
Samson failed to pass seventh standard in the local high school but speaks English, German, Italian, French and Japanese, apart from South Indian languages. He also knows the history of every tourist location in Chennai and surrounding Kanchipuram, Pondicherry and Mahabalipuram. “I wish to be a model for other auto drivers in the country,” he says.

Samson’s relationship with the cyber world began in the 90s when a Japanese woman tourist helped him open an email account. He immediately printed a business card with the address. In 2006, with the help of a British national named Chris, he launched his portal.  Chris was working with an airline company and Samson was on contract service for him for three years. During this time, the auto driver also learned foreign languages from him. On a chance visit to an internet café with Chris, Samson found the Brit had his own web portal. Samson then asked him to create a website for him.

“The site is a huge success. It helps me be in touch with regular customers and expand the clientele. If more customers come on the same day, I arrange friends to look after them,” says Samson. He says his rates are competitive. “Foreigners are not concerned with money but quality.  But I charge a reasonable amount from both domestic and foreign tourists,’’ he says.  A 12 hour trip with Samson, either to Mahabalipuram or Pondicherry, costs around Rs 800-Rs 1,000, far cheaper than taxis.

Samson grew up in the slums abutting Loyola College in Numgambakkam after poverty forced his family to move to Chennai. “Life was difficult then and it was the Loyola Church which supported us,’’ he remembers. A school drop-out, he worked as a hotel boy and a tailor and only started driving an auto in the early 90s.  The father of two school-going children is now general secretary of the Good Will Auto Stand Union opposite the Taj hotel in Nungambakkam in Chennai.

Till recently, Samson operated his website from a local internet café.  It was only recently that he was gifted a laptop by Danish national Margaret, who visits Chennai regularly. The site opens with his beaming face and the line, ‘My name is Samson and I am an Auto-Rickshaw driver here in Chennai, formerly known as Madras’.  The site gives information about shopping centres and eateries, besides the tourist spots. Besides his recommendations and services, the website also gives you an option to advertise on his rickshaw. And he promises to help get the artwork done.