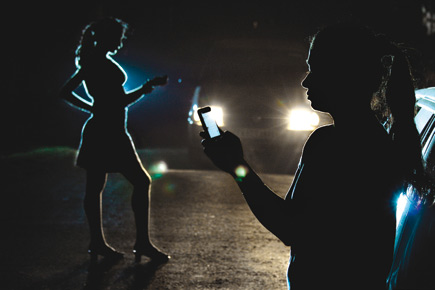 A novel take on phone spam could improve the lives of sex workers in Bangalore.


A novel take on phone spam could improve the lives of sex workers in Bangalore.

It is a regular afternoon on Sampige road in Bangalore: a bicycle struggles for space in a sea of traffic; a vendor sells flowers outside a temple; and a sex worker negotiates with a middle-aged man. The last part is hard to notice unless one is involved in the sex trade. Or, a researcher hoping to improve the lives of sex workers.

Nithya Sambasivan, a PhD candidate at the University of California, found that sex workers in Bangalore—unlike in many other parts of the country—do not work out of brothels. They leave home as any other domestic help, and solicit clients at parks and bus stands. Their busy work schedules leave them very little time for essentials such as monthly medical check-ups for HIV and paying EMIs for their loans. Working with Project Pragati in Bangalore—which includes Ed Cutrell of Microsoft Research India, and Julie Weber of University of Michigan—Sambasivan implemented a phone-based broadcasting system that would inform each woman about her next appointment with the doctor and bank.

Since 97 per cent of these women own mobiles, reminding them of these appointments should have been easy. But a broadcast to a sex worker could be catastrophic if a family member took the call.

To counter these issues, the team designed an automated calling system that would call each phone and play a pre-recorded audio reminder. These audio messages mimic spam. But they are in the voice of a field coordinator who the women know well. The messages are deliberately short and are a kind of code that only the recipient understands. For everyone else, it is spam.

The results of this spam are promising. It connected with more than 85 per cent of the women called. They listened to the short messages without hanging up. This would have been difficult with a live operator, as it would have required the women to explain why they were talking to a stranger on the phone. Since the intervention was one-time, there was not much improvement in repayment rates or medical testing enrolment. But the signs are certainly encouraging. This idea can be of great help to any group of people living two lives, such as war refugees or homosexuals living in conservative societies.