Tamil Nadu, with its robust lineage of medical care including traditional schools of healing, has emerged as the primary hub of medical tourism in India 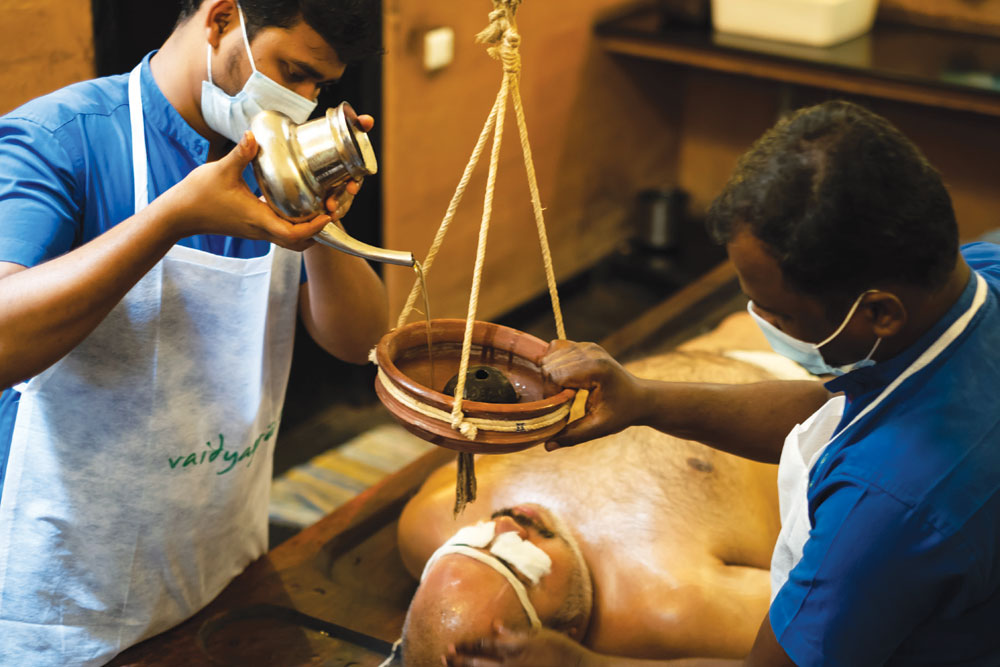 Tamil Nadu is one of the pioneers of medical tourism in India. Attracting a large. number of international health tourists, the state has always been an important centre for medical diagnosis and treatment. Tamil Nadu also ranks at the top in the country in terms of number of children immunised and takes pride in the thousands of eminent medical practitioners specialising in various fields of medicine. Over 15 lakh patients visit Tamil Nadu annually for medical diagnosis and treatment.

Tamil Nadu has the best infrastructure in the country to support medical tourism. It has over 12,500 hospital beds, around 10 lakh registered doctors, 48 government-run medical colleges with hospitals; and hundreds of private specialty and multi-specialty hospitals. Besides, there are 1,491 Indian system hospitals and hundreds of Ayurvedic, Siddha, Unani and Homeopathic resources. Backing these are 84 pharma colleges and around 400 pharma-manufacturing companies in the state.

Considering the importance of Medical Tourism, the Department of Tourism along with the hospitals has established a Medical Tourism Information Centre in the Tamil Nadu Tourism Complex and Travel Desks in Chennai and Madurai. A core committee of medical experts and the Directorate of Medical Education oversee the system. 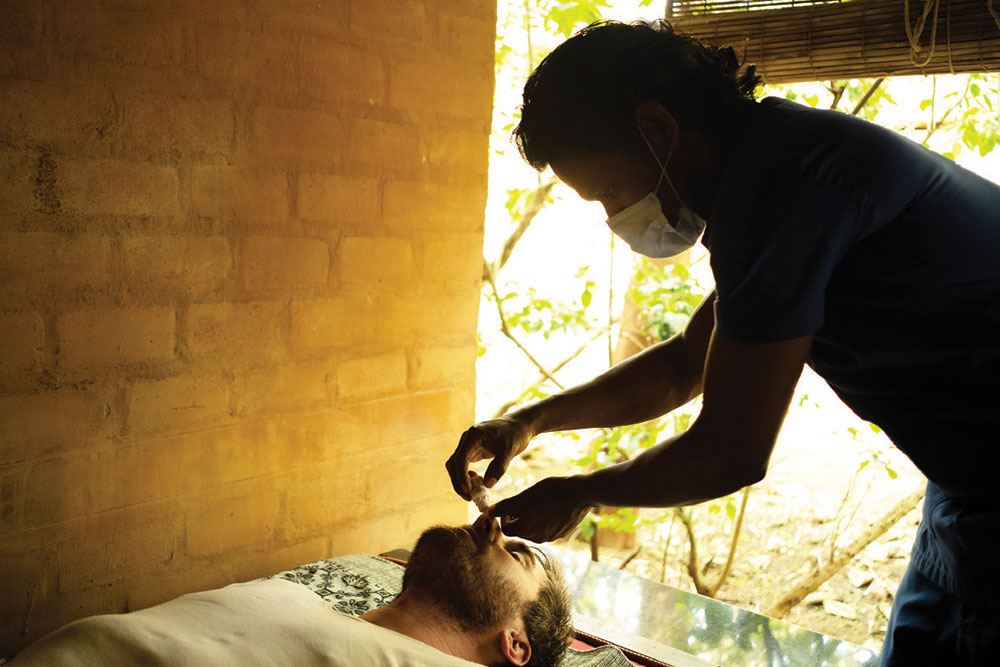 Today, patients from around the world arrive in Chennai on a daily basis and receive the best healthcare in the world at extremely competitive rates.

Chennai has an impressive lineage when it comes to healthcare in the country. In fact, the first hospital of India was set up at Fort St. George on 16 November 1664 by Sir Edward Winter to treat sick soldiers of the East India Company. The hospital grew, expanded and moved out of the fort to its present location in 1772, where it stands today as the Rajiv Gandhi Government General Hospital, and was opened to Indians in 1842. 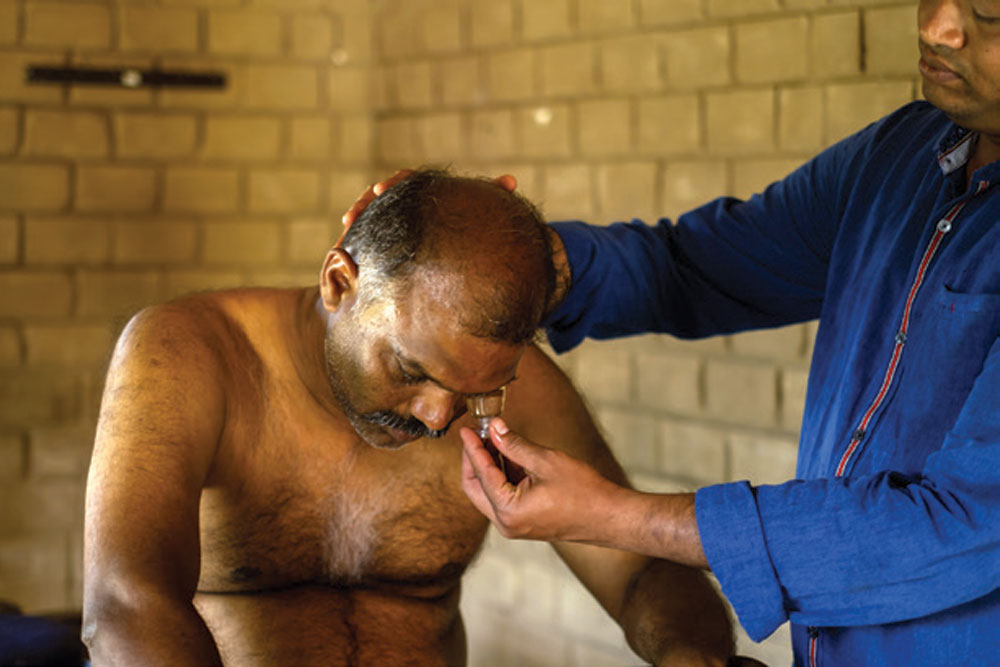 Throughout the colonial era, doctors from Europe and Eurasia trained and practised at India’s first hospital. Between 1800 and 1820, about four hospitals were formed in Madras (as Chennai was then known).In 1835, Madras Medical College was set up, making it one of the oldest colleges of European medicine in Asia.

It wasn’t only Chennai that saw this scale of medical development. In 1900, the Christian Medical College, Vellore was established, attracting some of the best talents from the United States. The Madras Public Health Act, the first of its kind in the country, was passed in 1939.

Tamil Nadu has the best infrastructure in the country to support medical tourism. Focus on healthcare has always been part of Tamil Nadu’s ethos, which is why the state has been able to attract patients from around the world

In the latter half of the twentieth century, many prominent institutions began to appear in the city. The Cancer Institute in Adyar was set up in 1954, and SankaraNethralaya was founded in 1976, adding to the city’s reputation. Along with the Government General Hospital they served as renowned centres for diagnosis, treatment and research for decades. The establishment of the Apollo Hospital in the city in 1983 marked the advent of corporate hospitals in the country. The city is where one of the earliest paediatric intensive care units (PICUs) was established in the 1990s. 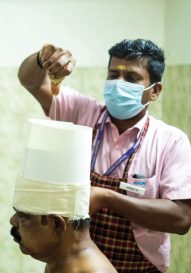 Therefore, it should not come as any surprise that today Chennai is the hub of medical tourism in India, an industry that is estimated to grow at around 30 percent or more per year. 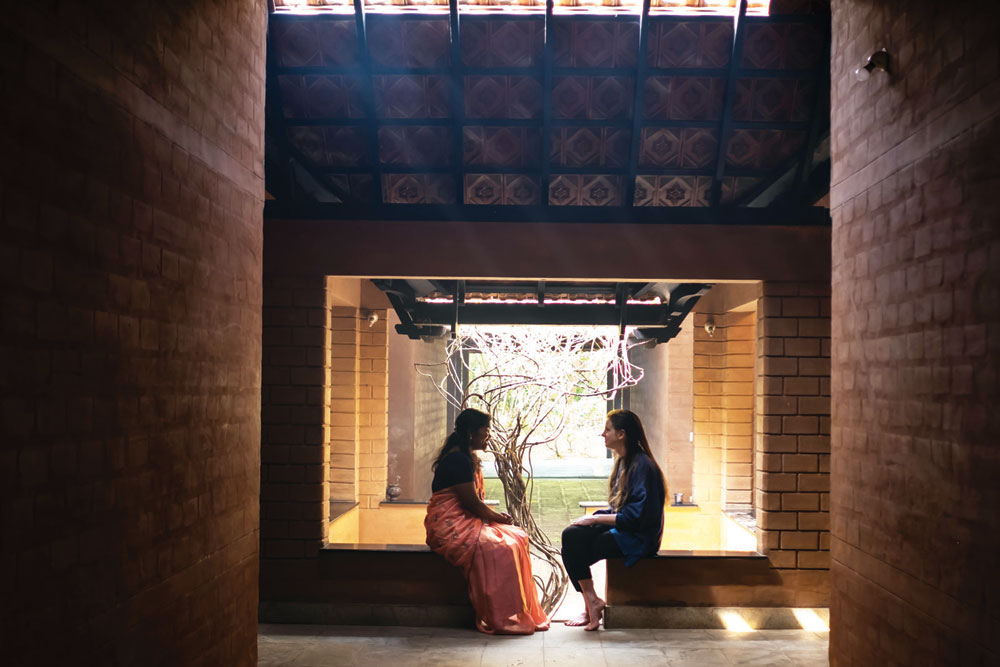 The prime NABH-accredited hospitals include Chennai Apollo Speciality Hospital, Dr Mehta Hospitals, Frontier Lifeline Hospital, Global Hospitals & Health City, SankaraNethralaya, and Vijaya Medical & Educational Trust. Apollo Hospitals Group has five hospitals in the city, including a main hospital and a speciality oncology hospital, with a total bed count of 1,100. Chennai has about seven palliative care units. Poonamallee High Road, one of the arterial roads of the city, has more hospitals than any other roads in the city and is known as the city’s ‘Med Street’.

Coimbatore has emerged as a major and scenic hub for these centres, which offer treatments like panchkarma, shirodhara, weight reduction and even an immersion in Vedic culture

MEDICAL TOURISTS FROM AROUND THE WORLD

Focus on healthcare has always been part of Tamil Nadu’s ethos, which is why the state has been able to attract patients from around the world. These include countries like Kenya, Nigeria, Tanzania, Iraq, Afghanistan, Oman and the Maldives, besides patients from other cities in India who come here for surgeries and treatment. With a doctor-patient ratio that is above the national average, Tamil Nadu is able to provide the best healthcare.

Tamil Nadu has always been an important centre for medical diagnosis and treatment and now serves as a hub for medical services in the eastern part of the globe. It is estimated by the Confederation of Indian Industry that every year about 15 lakh patients visit Tamil Nadu for medical diagnosis and treatment. Many of the doctors and surgeons practicing here have been trained or have worked at medical institutions in the US, Europe, or other developed nations, and they are able to deploy that rich experience here. Importantly for medical tourism, most doctors and nurses are fluent in English. Since Tamil Nadu has been a medical hub for such a long time, top-of-the-line medical and diagnostic equipment from global international conglomerates is available at the hospitals servicing international medical tourists here. Not only doctors, Indian nurses are considered among the best in the world. The best part is that this medical care is available even to the most budget-conscious traveller.

From certified Ayurvedic hospitals to high-end recreational retreats in beautiful natural settings, Tamil Nadu has it all

Clearly people from across the country and abroad prefer to get treated in the hospitals of Chennai, the city that is undoubtedly the hub of medical tourism in India. According to a study by Confederation of Indian Industries (CII), Chennai attracts about 40 percent of the country’s medical tourists. Foreigners, especially those from developing and underdeveloped countries such as Nigeria, Kenya, Burundi, Congo, Malawi, Bangladesh, Oman and Iraq, come to the city for advanced medical care. Most leading hospitals in Chennai, which receive a steady stream of patients from other states of India and abroad every day, have separate wings for international patients. 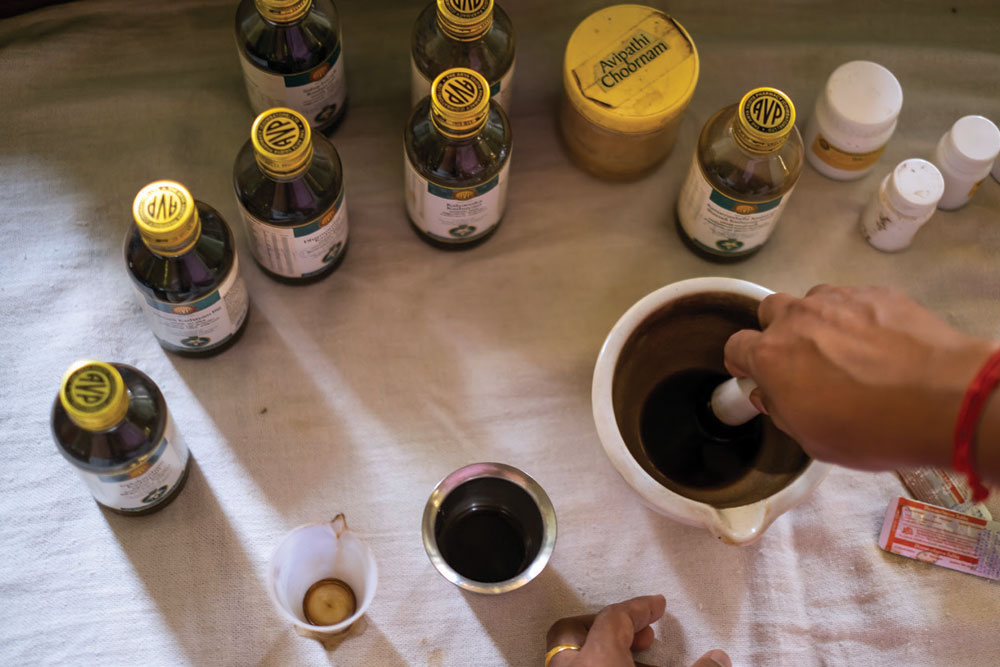 With more than 75 percent of the medical tourists being from the Middle East, hospitals in the city are vying for ‘halal’ certification. In fact, the first hospital in India to receive the halal certification from the Halal Development Authority is Chennai’s Global Health City. Other hospitals in the city are vying for he certification as well. Halal-friendly medical tourism services include food, prayer hall, ‘quiblah’ (the direction of Mecca) signs in every room, prayer mat, copies of Quran and appointments of woman physicians for woman patients.

The Medical Tourism Industry in India expected to reach US$10 Billion soon, and Chennai is poised to lead the way.

Not only Western medicine, Tamil Nadu is also a hub for traditional Indian systems of healing. The Siddha system, one of the oldest systems of medicine in India, began in its current form around the 16th century in Tamil Nadu (although the oldest text referring to it is the 6th or 7th century Tirumandiram of Tirumular). The term ‘Siddha’ means ‘achievements’ and Eighteen Siddhars were saintly persons who contributed towards the development of this medical system. 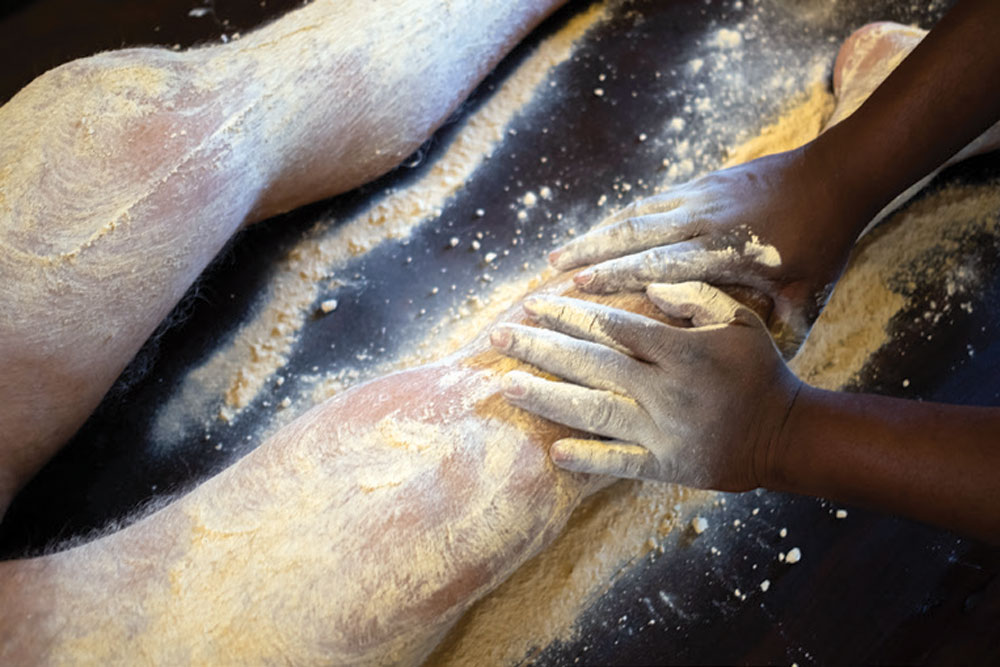 From certified Ayurvedic hospitals to high-end recreational retreats in beautiful natural settings, Tamil Nadu has it all. Especially the tranquil hilly and forested regions have seen the emergence of yoga retreats and wellness centres based around Ayurveda. Use time-honoured techniques to heal their patients, with an ability to address even serious and chronic conditions, these retreats are playing their part in healing patients.

Coimbatore has emerged as a major and scenic hub for these centres, which offer treatments like Panchkarma, Shirodhara, weight reduction and even an immersion in Vedic culture. Typically, the diet and treatment regimen of patients is decided after consulting a qualified Ayurveda doctor. The food is strictly vegetarian. Meditation and yoga are also included in the routine for the healing process to be holistic.

Another new development, which is still in the works, is the Tourism Department’s plan to promote the Siddha system through Ayush wellness centres attached with hotels and youth hostels run by the Tamil Nadu Tourism Development Corporation (TTDC) as part of boosting wellness tourism in the post-Covid period.

By promoting medical and wellness tourism, the Government plans to transform Tamil Nadu into a hub for wellness and other alternative therapies for body rejuvenation and attract both domestic and international tourists in the process.

The efforts of the Government to promote Ayush wellness centres with emphasis on Siddha system will not only promote the traditional system of the state but also support the central government’s initiative to position India globally as a wellness hub in the post-Covid era.With a plethora of excellent hill stations at its disposal, Tamil Nadu has great potential to further expand the framework of Wellness Tourism and position itself as a Siddha and Wellness Tourism Destination.

Tamil Nadu is also a leader in organ transplantation in India. In the state this is facilitated by the Transplant Authority of Tamil Nadu (TRANSTAN) of the Government of Tamil Nadu and several NGOs. In fact, Tamil Nadu also ranks first in India in deceased organ donation rate at 1.8 per million population, which is seven times higher than the national average. The Transplant Authority of Tamil Nadu functions under the chairmanship of the Chief Minister of Tamil Nadu. The state authority has created a centralised waiting list system to ensure proper allocation of donor organs. The state has also created green corridors, routes that are cleared out for an ambulance carrying harvested organs to ensure their delivery at the destination in the shortest time possible. For this, the hospitals involved in a transplantation, city traffic authorities, and in certain cases airport authorities, collaborate to transport an organ from one hospital to the other. The first use of the green corridor in Chennai took place in July 2014. In fact, Tamil Nadu has been awarded the ‘Best State Award’ in cadaver organ donation from the National Organ and Tissue Transplant Organisation, for six consecutive years (2015–20).

Not only hospitals, home healthcare and home nursing are also excellent in Chennai. Medical tourists who need to recuperate after treatment can avail of such facilities as well as hospice and palliative care. There are many companies which provide these services in Chennai.

Even the Supreme Court of India has come out in praise of the medical infrastructure of Tamil Nadu, calling it one of the best in the country. In the past few decades, Tamil Nadu has successfully positioned itself as a medical hub attracting patients from all over the world for economical, advanced and reliable treatments. As India surges forward on its way to becoming the leading medical tourism hub of the world, Tamil Nadu will play a pivotal and leadership role in this.