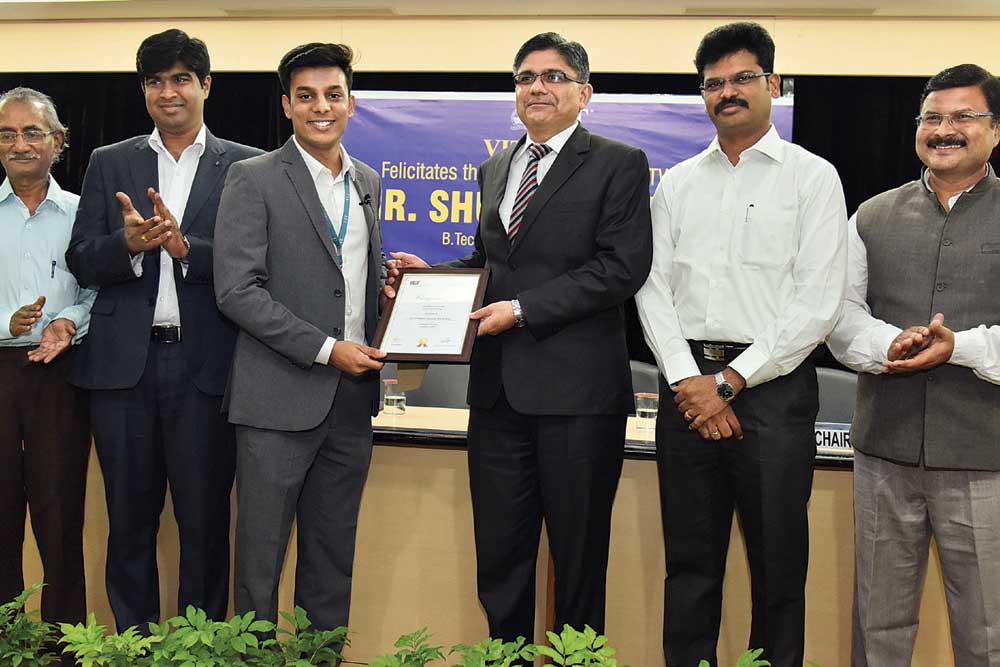 Shubham Saraff, a third year student of B.Tech in Computer Science Engineering at Vellore Institute of Technology and who clinched the world title of ”IET- Present Around the World (PATW)” contest was felicitated at VIT. He was honoured by Mr. S. Raghavan of IET India chapter in the presence of Mr. G.V. Selvam, Vice President of VIT. Saraff’s presentation was on ‘mirror neurons’ as part of his project on neurons that shaped us. He submitted a research paper on the creation of an application that would help in the stimulation of the nervous region with the creation of mirror neurons. He received the first place in the world level finals held at London termed IET PATW – Present Around the World in November. He also received UK Pound 1,000 (Rs. 85,000) cash award for the same.

The journey to reach the top was not easy for Saraff as there were over 1,000 participants from over 150 countries that included students like him, young research scholars and also employed professionals.

The felicitation function was held at Dr. Ambedkar Auditorium. Amandeep, student president of IET’s VIT chapter welcomed the gathering. In his address to the students after felicitating Saraff, Mr. G.V. Selvam said he was reminded of his school days. He said that those were days when he was unable to ask questions and had he done that, it would have been possible for him to increase his knowledge. He said he appreciated the efforts of organisations like IET to bring out the talents of students. There were now abundant opportunities for students to improve their levels of knowledge, thanks to many events and competitions that were now being conducted. He said a situation had now arisen where it was not possible to do anything without engineering and technology.

Medical technology had become so advanced that it was now possible to perform surgery through robotics. Through new innovations, it was also possible for advancements in medical technology to bring down the cost of treatment, Mr. Selvam said. He also recalled that during the recently conducted Hackathon organised by the Rajasthan Government, two students from VIT – Utkarsh Kumar and Vansh Arora, had topped in the event and also bagged a prize of Rs. 15 lakh.

PATW is a global competition organised by The Institution of Engineering and Technology (IET) of United Kingdom for over 15 years for young professionals and students aged between 18 and 30 to provide a platform to explore their talent and innovative thinking in engineering and technology.

The first round was at the university level, held at VIT in March last year, the Zonal round in Vellore the next day. Saraff represented VIT University at the Chennai Local Network Finals. As the winner of this round, he took part in the South Asia Finals in Bengaluru which saw participation from 9 different regions. From across 150 countries, only 5 winners from global regions around the world competed at London on 15th November. These regions are: America, Asia Pacific, South Asia, UK Region and EMEA (Europe, Middle East and Africa).

Shubham has received several International awards for academics including a Merit Scholarship Award. He has received other awards which include Distinction in Speech and Drama from Trinity College of London. He is also a licensed Scuba Diver, Boxer and keen Sky Diver. Shubham has now been invited to present his paper on Artificial Intelligence at Cambridge University, UK.