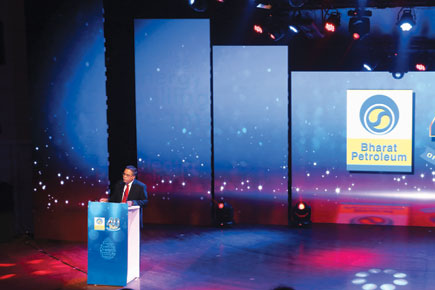 There is something in the word ‘energy’ that most people miss.

Thanks to popular usage, it has come to connote a force that fuels action: hence, terms like electrical energy or fuel energy.

However, etymologically, the root of the word lies in ancient Greek –‘en’ and ‘ergon’; ‘en’means ‘within’and ‘ergon’means ‘work’. That is, something which works from within. It is only in the 17th century that it became associated with ‘power’ and, in the early 18th century, was adopted by scientists.

On Sunday, January 24, 2016, at the NCPA Tata Theatre in Mumbai, where the sea waves lapped gently with the evening tide, over 1,000 people witnessed a return to the original definition of ‘energy’. The larger occasion was the 40th anniversary of Bharat Petroleum, but what lay within the 150-odd minutes would take everyone by surprise and bring both tears and a twinkle to the eyes. This was an evening where the three-month long Energising Bharat Awards culminated in a grand ceremony before an august gathering that included the Minister of State (Independent Charge) for Petroleum and Natural Gas, Mr. Dharmendra Pradhan, the Petroleum Secretary, Mr. Kapil Dev Tripathi, BPCL’s Chairman and Managing Director, Mr. S. Varadarajan, business partners, dealers, distributors, well-wishers and employees. Among those in the audience were two fourth generation dealers – M/s T Rajagopala Iyenger (TRI) & Sons and M/s Pashabhai B. Patel, who were also honoured on stage.

But the evening belonged to a band of eight individuals who, without even realising, had adopted the original meaning of ‘energy’ and made it their life’s mission to spread goodness around them in so many different ways: these were the five award winners and three others who received a special mention that evening. They won more than an award that day, they won the hearts of everyone present and kindled a spark that is sure to light up many other lives along the way. As one member of the audience said, “If a sweeper from the corporation can teach children out of his own meagre wages, what am I doing here? From next week, I will set aside money to educate my driver’s children.”

If emotions were running high that evening, it was also because of the on-stage performances that left the audience cheering for more: against an electrifying backdrop of LED panels where technology was deployed by Wizcraft without a glitch, traditions were not forgotten. The ceremonial lamp was lit by the Hon’ble Minister, the Secretary and BPCL’s CMD, followed by a moving Ganesh Vandana performed by legendary dancer Sudha Chandran. She, and the others who followed, exemplified energy in its purest, most inspirational form. The Prince dance troupe, comprising children from the slums in Odisha, and the differently-abled team choreographed by Shiamak Davar, were proof that challenges could be overcome at every level if energy is channelled in the right direction. Sudha Chandran and the Prince dance troupe performed two numbers each and the evening concluded with the live rendition of the newly-composed BPCL anthem ‘Nayi Umang’ sung by Tushar Joshi.

The highlight of the function, however, lay in the announcement of the awards that were a closely guarded secret, known only to a handful of people who had managed the process. While the eight recipients had been invited to the ceremony, almost every one of the nominations had powerful, moving stories behind them. From 900+ entries received, 265 had been shortlisted for screening by a jury and, from this number, emerged 36 who were evaluated by a second – and final – jury. Their work was validated through field visits, on-ground assessments and feedback from beneficiaries before the final eight were chosen to be honoured. Each of these individual stories speak of personal adversity, strength, conviction and, most importantly, passion and courage to take that first step to make the world a better place. From the sweeper in the municipal corporation, who sacrificed his earnings to educate fellow-Dalit children so that they grow into a better future, the 12-year old schoolgirl who ingeniously devised a way to save millions of litres of water in Nashik, the first-aid worker who took it upon himself to improve health in villages of North India or the painter who teaches the prison inmates in the Central Jail of Jaipur…all of them have worked selflessly for years without the slightest desire for recognition or awards. And they were all there to receive national recognition on this unique platform.

If there was drama on stage, there was also dedication and depth: Mr. Pradhan’s impromptu speech simultaneously congratulated BPCL and exhorted it to rise and support the startup movement sweeping India – an idea that was grasped by BPCL’s Chairman & Managing Director who announced the company’s wholehearted support to the movement, later that evening. Mr. Pradhan pointed out that it is the middle and lower middle class who fuel change and growth in society. By way of support he gave the example of 65 lakh consumers giving up LPG subsidy at the request of the Prime Minister. He acknowledged BPCL’s efforts at recognising great work done by people, for people belonging to this section of society. He also insisted that people should think beyond money and work towards the greater good, like the young student who created the water saving shower to conserve water. Mr. Pradhan went on to request all the energy companies to focus on helping future generations with entrepreneurial endeavours, so that they can be confident that there is always somebody (i.e. the Oil sector) standing behind them in support.

Preceding him, while welcoming the audience, Mr. Varadarajan had stated that, “The core purpose of BPCL has been ‘Energising Lives’ which clearly reflects the multiple roles played by Bharat Petroleum in energising multiple facets of the Indian economy through the entire value chain. And today, when we look back at the 40 years of fuelling dreams, we stand proud, honoured and privileged to have received the love, respect and recognition from all corners. At 40, Bharat Petroleum is young and raring to go. While our investments in infrastructure and process improvement forms the Hardware and Software of our development plans for the nation, our focus is definitely also on Humanware, within the organisation and in our network, to carry on the baton of trust. Going forward, the diverse strides we take in bio-fuels, renewable energy, self-sufficiency and inclusive growth will render a deeper meaning to our promise of ‘Energising Lives’.”

For everyone present, there was no doubt whatsoever that, for BPCL at a youthful 40, life had only just begun with many milestones already crossed and a series of new ones ready to be set. For the award winners, their families and friends there were moments to be treasured. And the other guests who came to be entertained were pleasantly surprised at the inspiration that was self-evident.

As the evening melted into the night and the action moved from within the auditorium to the lawns outside, where a splendid dinner with cuisines from across the country awaited the guests, it seemed as though they were already satiated – at least in their minds and souls.