A stylish smartphone with speed to boot 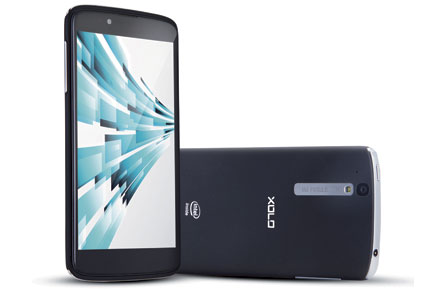 A stylish smartphone with speed to boot


This is the third Intel-based smartphone from Xolo. Last year we saw the first variant of this handset, which was touted as the fastest smartphone that runs with ‘Intel Inside’. The third avatar also runs with a Dual Core Atom Processor, and tests show it manages to beat everyone in its competitive range, at least till the date of its launch.

The moment you pick up this phone, you can feel quality. Some of those I showed this to even said this is the iPhone6, till they realised that there is no iPhone 6 (atleast till now), and this is not an Apple device.

The Atom Z2480 processor is built to perform and ensure that you have a great battery life too. The processor also has a few tricks up its sleeve, including a 400 MHz Graphic processing unit that enables both recording and playback of 1080p HD video, and even realistic 3D image reproduction. So whether you want to watch a movie, take photos or a video, this phone is a performer. The phone has a 4.7 inch sharp display, which is slightly curved. The screen is bright and crisp, and merges seamlessly into the unibody design. The screen is HD capable at 1280×720 pixels.

The phone features a 1.3 megapixel front camera and an 8 megapixel rear camera, but the picture quality is less than expected. The camera can shoot in burst mode at 15 frames per second, but will only save 10 shots. The phone has well-rounded corners and is finished in black and silver. The back has a rubbberised feel to it, giving it a good grip. The Xolo x1000 is rated for a talk time of 9.5 hours, and weighs just 140 gm. It currently uses Android 4.0 as its operating system, and 4.1 upgrades should be available soon. The only downside is its brand name. If you can look beyond that, this is a good, capable and mean machine.