Apple has not called it iPad 3, but iPad 2 would still be proud of it 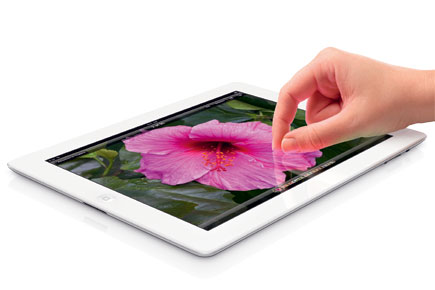 Apple has not called it iPad 3, but iPad 2 would still be proud of it

Ten months later, it came to India and was a success. The iPad 2, unveiled within a few months of that, was thinner, faster and had a camera. And then came the sad news of Steve Jobs’ demise. Some suspected this would mark the end of Apple’s innovations. But on 7 March this year, Apple launched yet another iPad. It is called the new iPad—not iPad 3 or iPad HD or anything of the sort. And iPad 2 would be proud of it.

While it manages to look largely like the earlier iPads, it has gained 50 gm in weight and 6 mm in thickness. What hits you first about it is its high-resolution screen, which supports 3.1 million pixels. That’s more pixels than on an HD television set. The greater resolution grants much sharper images/text and higher graphic capabilities, while allowing more accurate photo and video editing. The tablet can now play HD movies off iCloud and iTunes, and also such content that you load it with. Using Air Play and Apple TV, you can also stream HD movies to your TV set.

Another big change is that the new iPad has a 5 megapixel camera. One could ask why tablets need high-resolution cameras. But a lot of people actually use tablets to take photos. If you travel across Southeast Asia, you will see a lot of people doing just that. After all, if you can click a picture, edit it and then share it, all using the same device, wouldn’t you?

The new iPad supports 4G. But, as with the iPad and iPad 2, you can also buy the Wi-Fi-only version. Of course, if you buy Wi-Fi+4G, you will have blazing speeds once these networks roll out. And what do you do with so much bandwidth? You can use the new iPad as a Wi-Fi hotspot and connect all your wireless gadgets to it.

The insides are smarter too. The main processor and graphics processors are greatly enhanced. All this helps expand the usability of web and graphic applications: be they stock trading apps, games or movie/photo editing apps. And its Bluetooth connectivity has been ramped up to version 4.0. The new iPad is the world’s first tablet to feature this new power-saving advancement.

Even with all this, the Wi-Fi+4G still delivers 9 hours plus battery time. There is no word yet on when the new iPad will be launched in India, but I await it eagerly.