With this HDD, you do not need to find a Wi-Fi hotspot to watch movies 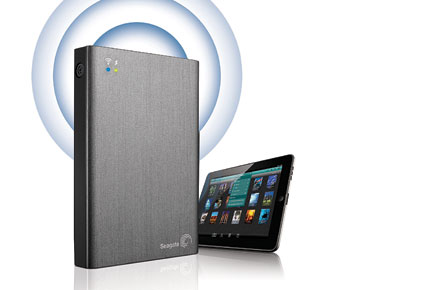 With this HDD, you do not need to find a Wi-Fi hotspot to watch movies


In its second avatar, the Seagate Wireless Plus HDD measures the same as its previous version, the Wireless GoFlex, but it has more storage, 1 TB of it, so you can save about 500 HD movies on it. You can access its content from your phone or tablet, be it Android or iOS. There is also an app for Kindle Fire HD.

It can also be used with PCs at home or your office. The wireless HDD can either join your Wi-Fi network or create its own, so other devices can connect to it. The network can be password-protected and integrates up to eight devices simultaneously. This network, with all its content, can travel with you whether you are on a road trip or at a friend’s house.

The HDD has DLNA-compliant apps designed for Samsung Smart TVs and Blu-ray players, thus making it accessible to more devices. If you need wired connectivity, you can use its integrated GoFlex system to hook it up with various types of connectors. For example, you can connect it to a dock or use it to connect to a USB 3.0 port. And if you have other GoFlex devices, you can use the HDD with them directly.

A major issue continues to plague this drive, though. Like the Wireless GoFlex, it won’t charge while connected to a USB port. You need a separate charger and cable to do that.

I tested it by streaming an HD movie to three devices, and there was no lag in any of them. I also copied files on it from other devices—while streaming the movie—and found the performance satisfactory. It weighs just 256 gm and is easy to carry around. Above all, with its 10 hours of battery time you don’t need to hunt for wi-fi hotspots anymore. It costs at least three times more than a wired HDD. It is not for desk-bound users, but a mobile warrior may find it worthwhile.