It has twice the speed and graphics performance than the older Mini. Nothing else compares. 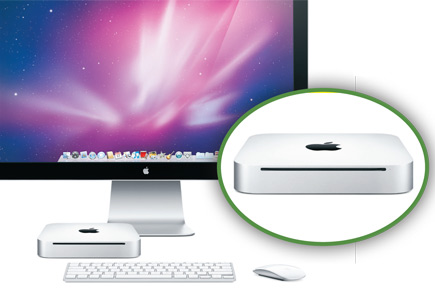 It has twice the speed and graphics performance than the older Mini. Nothing else compares.


It’s faster, more versatile, and built in an all new aluminium enclosure. It’s so small that it seems like a book lying on the table. But look at it closely—this is the New Mac Mini from Apple. Released a few weeks ago, it is well and truly in the stores now.

This is one mighty computer, with twice as much graphic power and twice the speed of the earlier version. Apple touts it as the most energy-efficient desktop computer ever—it uses just 85 watts, running on full efficiency mode (not counting the monitor and peripherals).

With a built-in wireless card, it does not need an ethernet cable. You will, however, need to buy the monitor, keyboard, mouse and power adapter separately. But once you connect them to the Mini, you are good to go. It comes pre-installed with the latest edition of Snow Leopard Mac OS, and holds within it a 2.4 GHz Intel C2D processor, 2 GB Ram and 320 GB hard disc. The heart of the graphic engine is a Nvidia 320M graphic card.

The operating system has applications like Mail.App, a mail client; iCal, a calendar client; and iLife which includes iPhoto that not only lets you tag photos by names and faces, but also by the place they were shot.

Mac machines are not affected by virus infections, so you do save on the anti-virus. But you will need to buy an office suite separately, for which you will get free updates for the life of the machine. The environment-friendly design helps you do your bit for mother earth.

All in all, the machine turns out to be a bit expensive compared to regular desktops. But, if you are looking for power, ease of use and a smile at the end of the day—give the New Mac Mini a serious look. Trust me, it is the coolest desktop ever.

In case you wish to run Windows, the box runs that too. But that would be like putting diesel in a petrol car and expecting it to perform.