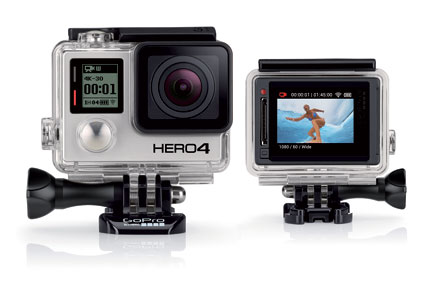 A brand new image sensor inside the GoPro Hero 4 Black edition makes it twice as fast than its previous avatar. The new sensor also allows functions that one would get only in high-end DSLR cameras or movie cameras, thus allowing you to capture the moments as if you have a professional film crew on hand to do this. The new edition, which is small and portable, also features full 4K video capture at 30 frames per second to full HD videos at 120 frames per second.

An improved audio system now increases the dynamic range, and the built-in analog to digital convertor and compatibility with various microphones will ensure that the sound captured is to your liking.

The Hero 4 Black edition also addresses one of the major issues we have had with cameras: a single button not only turns it on, but also starts recording the moment you press it, ensuring that you don’t miss a moment. In addition to a quick start, the Black edition can capture still images at 12 megapixels at 30 frames per second speed.

It does not stop here. The Hero 4 Black edition now has the capability to adjust from a dark scene to a bright scene automatically, and the improved sensor handles low-light situations so amazingly well that you can even use it to capture the night sky and the Milky Way.

The Black edition unit comes with the camera, as also a standard housing unit, a rechargeable battery, curved and flat adhesive mounts, plus a 3-way pivot arm. You will need to buy a high-speed microSD card separately, though. Its bilt-in Wi-Fi and Bluetooth feature allow you to use your smartphone as a trigger, or use a Bluetooth remote control. If you like having a screen on top of the camera, the LCD comes at an additional $79.99.

The huge range of mounting accessories that are available for the GoPro allow you to take it anywhere and mount the camera on almost anything— on a pole, on the dashboard of your car, or on your headgear—to capture all your outdoor moments.