Apple iPhone 6 and 6 Plus

Yes, they are bigger, lighter and faster. And worth upgrading to 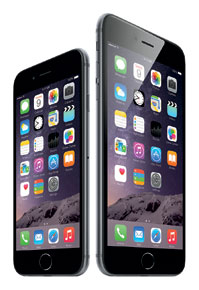 Yes, they are bigger, lighter and faster. And worth upgrading to

The iPhone 6 features a 4.7-inch screen, while the 6 Plus has a 5.5- inch display. Both of them are Retina HD displays and are packed with innovative technologies that ensure that the colours that you see on the screen are vivid and bright, and the text is easy to read. The handsets also feature a precision unibody enclosure of anodised aluminium, which seamlessly joins the shaped glass display screen, assuring you a smooth surface from end to end.

On the inside, Apple’s phones have upgraded to A8 processors, which now run on 64-bit architecture, very similar to what your desktop would have. This gives the new iPhones added power efficiency and extends their battery time. It also means faster processing and enhanced control of applications. Plus, the new processor lets Apple offer console- quality games on these handy devices.

The cameras are also better, ensuring sharper pictures than ever; iPhones now boast of an 8 megapixel sensor, a True Two Tone Flash integrated into a single lens, an f/2.2 aperture, and 1.5 micron pixels. For optical image stabilisation, Apple has added a mechanism for both horizontal and vertical adjustment of the lens. As for video use, iPhones can now capture up to 240 frames per second, letting you create some amazing slow-motion clips.

The front camera also has a brand new sensor, a larger f/2.2 sensor that increases light absorption by 80 per cent, and a ‘burst mode’ that enables you to get that perfect selfie. The sensor also lets you take HDR photos and HDR selfie videos.

Both the iPhone 6 and iPhone 6 Plus will come with iOS 8 preloaded, and with huge improvements. The fingerprint sensor that was added in the iPhone 5 now acts as your credit card payment gateway. Though this feature may not be available to us in India, it will surely relieve you of worrying about credit cards if you travel abroad. That’s not all. The new iPhones also have a barometer to let you monitor your workouts and put all that fitness data on the screen for easy viewing.