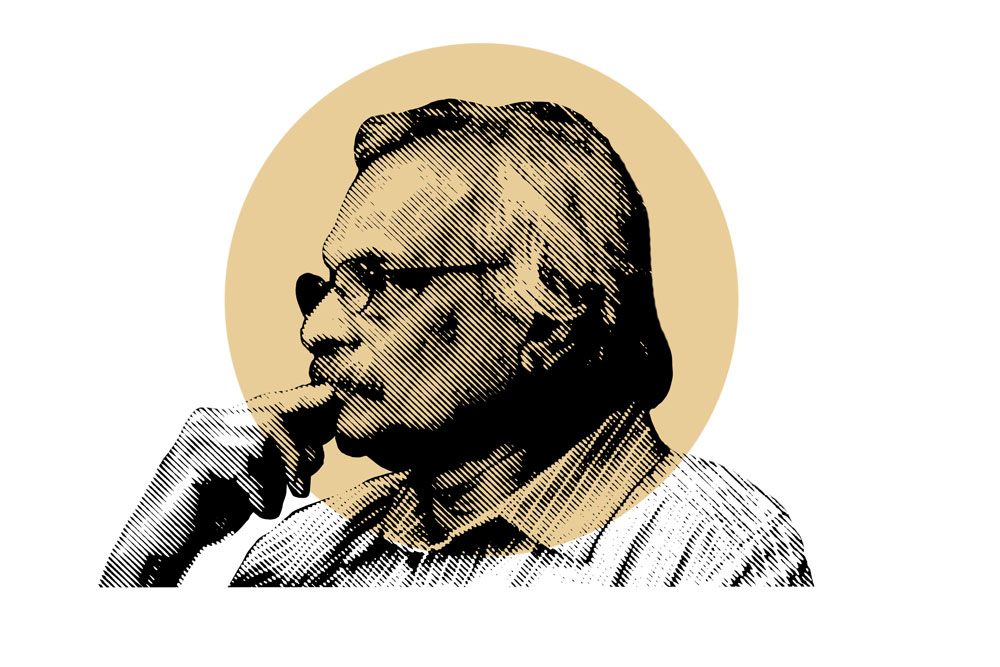 
When Delhi: A Soliloquy (Eka), the novel by celebrated Malayalam writer M Mukundan, won the 2021 JCB Prize for Literature, it came as no surprise to those who are familiar with his work. This is a novel where Delhi plays protagonist, with all its relentless brutality and ruthless indifference juxtaposed against its ability to inspire hope. This is a city we all recognise, even though the characters belong to a small Malayali community who have migrated to Delhi.

Winning one of India’s most prestigious and well-endowed literary awards (a Rs25-lakh award, plus a cash prize for the translators, Fateema EV and Nandakumar K) is only Mukundan’s latest in a long line of achievements. In a career spanning over four decades, his stories and novels have been translated into several Indian and foreign languages, he has previously received the Ezhuthachan Puraskaram award, Kerala’s highest literary honour, as well as the Sahitya Akademi Award.

It is the poor, and the marginalised, especially Malayali immigrants, who feature in Delhi: A Soliloquy, as it is the poor and immigrants who make up most of the city’s population. The novel starts in pre-liberalisation India in the 1960s, and covers the chaos of the next four decades, primarily through the eyes of Sahadevan, a young Malayali immigrant who comes to the Capital for work. He eventually finds his bearings among a community of other Malayalis in Delhi and becomes a vital part of it for the next 40 years. There is Shreedharanunni—a hardworking everyman, father and husband, and a committed Communist—who is written vividly and poignantly. There is also JNU student and activist Janakikutty, the artist Vasu, and many others with wrenching stories. The struggles of the characters are conveyed without undue sentiment in Mukundan’s flowing prose.

Mukundan, 79, who is just recovering from a cataract surgery, speaks to Open about writing an award-winning biography of the Capital.

Your book Delhi: A Soliloquy was first published in 2011 as ‘Delhi Gathakal’ and has recently been translated into English. What are your thoughts on this?

When I write a novel, I never think about its translation into any languages. The only thought that would be on my mind then would be how to write the novel well and finish it well. That is no easy job.  For me writing is somewhat a masochistic activity. Once Delhi Gathakal was written and I was happy about it I started thinking about it being rendered in English. After all, Delhi: A Soliloquy is a biography of the city of Delhi.  So the city’s inhabitants should read it first of all. That is how I started looking for a translator. Fathima EV was my first choice. She was a godsend. She shared the work with Nandakumar K. They did a wonderful job together. That is how the English version of the novel, Delhi: A Soliloquy, came into being and won the JCB Literature Prize.


The JCB Prize means a great deal, it helps to transcend the borders of language and reach out to a vast English-speaking readership. When I won this coveted award, I felt that I have been instantly raised from the status of a regional writer to that of a national writer, says M Mukundan, author

What led you to write a book where the characters spend time in the alleys of Delhi?

I discovered the dark back lanes and alleys as part of my wanderlust. As a writer I consider it my prerogative to dig out camouflaged realities. The underbelly of Delhi is teeming with poverty and hunger. Delhi’s poverty is my writerly prey. I wrote about Delhi’s miseries and sufferings with my heart full of compassion. The creativity in me is awakened when I imagine myself inhabiting the body of a hungry, suffering man.

You describe early in the novel how Sreedharanunni died of a heart attack after reading of the Chinese invasion in the newspaper. Would you say this fictional incident conveyed the
real-life sense of betrayal felt by many Indians then?

That was the time when the images of Mao Zedong were inextricably embedded in the political imagination of enlightened Malayalis. For us Malayalis, China was the land of promise, a country we can emulate. The Chinese invasion was a shock. We couldn’t come to terms with it.  Sreedharanunni was not the only one to have died of a heart attack following the Chinese betrayal. There were other heart-breaking incidents, I am sure.

Many of your characters live in Delhi over a span of 40 years, as you did during your time as a cultural attaché in the French embassy. How has Delhi evolved since the 1960s?

When I arrived in Delhi in the early sixties, the city had an innocence about it. It was an archipelago of villages and towns elbowing each other. In the heart of the city, cauliflower fields were flowering and buffaloes were roaming the countryside. It was a safe city to the point that even at midnight women could walk the streets without getting assaulted. And then Delhi started changing. Lush green wheat fields gave way to high-rise buildings, flyovers and choking streets. Even in daylight, women don’t feel safe. Now I find it difficult to recognise the city where I had lived for more than four decades. The changes are so unsettling.

The book covers real-life events, such as Emergency, the anti-Sikh riots of 1984, and the death of Safdar Hashmi in 1989. Have any of your own experiences of these events featured in the book?

Most of the incidents I have narrated in the novel come from my experience. Lying on my back on the terrace of the house where I was living, I had watched war planes roaring away in the sky. In the aftermath of the Sikh massacre, I had seen bloodstained turbans and dupattas flowing in the drainage water in Lajpat Nagar. Hindu neighbours had rescued a young Sikh girl from rioters. The character Pinky in my novel was modelled on this girl.  Those days were a real nightmare the very thought of which, even now, sends a chill to my spine. 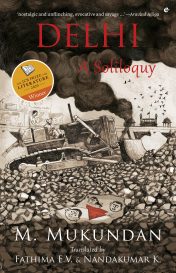 After coming to Delhi, Sahadevan finds a support system with the Malayali community. Much of his heartache comes from his attempting to fix all their problems. Is this something you also identify with?

Sahadeven is the alter ego of what I wanted to be in my life. He lives the life I failed to live. I wanted to work for the improvement of the living conditions of the poor in Delhi. Somehow, I couldn’t do it. Then I decided to write about them. I think that a novel is an imagined world that runs parallel to the real world. Delhi: A Soliloquy is the graveyard of withered dreams.

Nostalgia runs through Delhi: A Soliloquy, as the Malayali characters in the capital bond over the contrasts between Delhi and Kerala. This theme is also present in your novel Pravasam, also about non-resident Malayalis. Mayyazhippuzhayude Theerangalil, set in Mahe, Kerala also has a melancholic tone. Why do you revisit these particular themes in your writing?

I had a difficult childhood that was marred by chronic illness and solitude. As I was not allowed to go out and play with other children, I spent time gazing at the world through the window. That is how my worldview became rectangular, the shape of the window, while for everybody else the shape of the world is round. I grew up with this distorted worldview in me. In his novel The Famished Road, Ben Okri talks about a river flowing beneath the road. Likewise, a river of sorrow runs beneath my novels and stories. Intense nostalgia and sadness are two inseparable elements that stir up creativity in me.

Can you tell me your feelings on this book winning the JCB Prize? How is it different from winning the Ezhuthachan Puraskaram award?

Ezhuthachan Puraskaram is the highest award given by the state government to a writer in recognition of his contribution to the Malayalam literature. The JCB prize is different.  For someone like me who writes in a regional language the JCB Prize means a great deal. It helps to transcend the borders of language and reach out to a vast English-speaking readership. When I won this coveted award, I felt that I have been instantly raised from the status of a regional writer to that of a national writer. That is a nice feeling.

Delhi’s poverty is my writerly prey. I wrote about Delhi’s miseries and sufferings with my heart full of compassion. The creativity in me is awakened when I imagine myself inhabiting the body of a hungry, suffering man, says M Mukundan

What do you think about the status of Indian translations, specifically translations of regional languages, today?

More and more translations of Indian language fictional works are now coming up and getting noticed, too. Indian language writers are coming out of their isolation and entering mainstream Indian literature, hitherto dominated by English writings.  Three out of four JCB literary prizes announced so far have been won by the Indian language novels in translation. The JCB Prize is giving great confidence to regional language writers. And in Kerala, we have excellent translators.

It has been over 15 years since you relocated to Kerala. Are you still nostalgic for Delhi?

Yes, of course. Not a single day passes without my thoughts straying back to my beloved Delhi. Covid or no Covid, I would soon go to Delhi and stay there for a couple of weeks and come back recharged with creative energy to work on my new writing project.

Can you tell me about your future projects?

I am working on a novel, now in its nascent stage. A novel about the communist villages in Northern Kerala is a distant dream. One day I should write it. But I lack energy. My mind remains young while my body is ageing. That’s my problem now.