Will the Real Irom Sharmila Stand Up?

The political activist’s poetry suggests that in many ways, she is now a victim of her own sacrifices 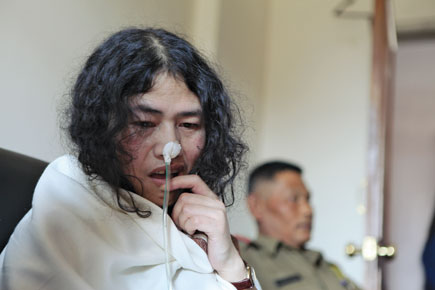 The political activist’s poetry suggests that in many ways, she is now a victim of her own sacrifices


Today is Tuesday, my birthday… / Right now my mind doesn’t indulge in bowels / So, I’m stealing time from ‘leisure’ / It frightens me when I muse over the reason of birth and death / When I ponder over the way I’m passing my time from morning till night

Thus starts Birth—1,000-line ‘prose poetry’, as its translator Tayanjam Bijoykumar Singh describes it, published in the second half of Minnie Vaid’s book, Iron Irom: Two Journeys. Singh has said that the poet in Irom Sharmila, who has been fasting for the repeal of India’s Armed Forces Special Powers Act for over a decade now, cannot be restrained despite her being kept in solitary confinement.

This genesis of this poem can be traced to when Deepti Mehrotra, the author of Burning Bright: Irom Sharmila and the Struggle for Peace in Manipur, gifted her a notebook with a pink and blue cover and white sheets. The revolutionary promised that she would use the book to write a very long poem, a poem of 1,000 lines. “I will write about society. I will write about my experiences since childhood. I will write about what I have seen,” she had said.

However, the poem, written in ‘stream of consciousness’ mode, is not easy to read. All poetry must dance. There can be no excuse for a lack of rhythm, or flow. This ambitious poem, which seeks to tackle the existentialist crisis of birth and death, fails to draw you in either by exciting your curiosity, or by the sheer beauty of its language or range of emotions. What comes through is the image of a lonely figure, a tube fixed to her nose, writing in her notebook in an isolated room.

Loneliness is Irom’s muse, and so is memory. Confined to her room in Imphal’s JN Hospital, dealing with hours that threaten to not dissolve easily, Irom started to write and paint. Her fast-unto-death had started in 2000 after the massacre of civilians by the armed forces in Malom in Manipur.

Revolutionaries are intriguing people. One wonders what makes them stand against the might of authority, or sacrifice the pleasures or comforts of things that consume our lives and imagination. Minnie Vaid writes in her half of the book—a short journey through Manipur’s volatile history and an interview with Irom—that once when granted an audience with Irom by the State, she asked her what motivated her to write poetry. “I like to report on society through my writings, it is only a means by God…” she answered.

And truly, the long poem has touched upon everything, from the ownership of land and industrialisation, to feuding tribes and the rising cost of education. Yet there isn’t a story here. There isn’t enough to make the reader see her world the way she sees it.

That Irom is a victim of her own image is evident in the way she attempts to write on universal truths and dilemmas. Irom ponders the questions of birth and death, wonders about the duties of man, chides man for being selfish, for digressing from what the Lord had said, and wonders about the purpose of life.

Obviously, there are limitations to what she can express. A revolutionary, too, is a human being with wants and desires and an urge to love like any other. But more than anything, Irom is the symbol of a protest. And it seems that for the greater good—what human rights groups and sympathisers have stamped her fast’s aim as— it is best to deal only in grand thoughts. For symbols of peace and larger-than-life characters like her, free expression has the inherent danger of distracting us from their ‘grand sacrifice’.

That Irom Chanu Sharmila would have the urge to explore the meaning of her life, and of a struggle that is in its thirteenth year without food, a tube fixed to her nose, her bones brittle and her hair thinning, is understandable. But mere expression by a revolutionary who is widely venerated is not a reason for adulation.

Irom is child-like in many ways, and that is preserved in the poem. There is wonderment at her own purpose in life, in this world.

Why did He send me to this world / He has put me amidst relatives, enemies and friends / But ‘in what form of guise’ is what I’m interested to know…

There is existentialist crisis. There are insertions of her own grand endeavour, her sacrifices, references to her own life as a public figure, who has given up food, water and love out of choice. Choice is what sets her apart. She wasn’t forced to fast; she wanted to. But over the years, especially after she fell in love, she seems to have become a prisoner of her own sacrifice. For this fast cannot be broken over something as paltry as ‘love’.

One of the important problems with the poem is that it may also have been lost in translation. The translation comes with the disclaimer that Singh had only hoped to convey ‘larger elements’ of its style and imagination and narrative form. This is why he probably fails her. As we read the poem in English, it is bereft of soul and passion. ‘Her lines run freely, without any punctuation marks at times. It is however tolerable in verse,’ the translator writes, as if in apology mode.

As per Singh, Irom has done a ‘comparative study of two persons, one an indolent and the other a hardworking one… She has painstakingly painted a picture of an ideal world where men can live as friends. Characters of different personalities as she sees in the present-day society are sketched with meticulous care.’ But there are no characters. There are lines where she hints at her own experiences.

She also speaks about the songs of ferrymen when they break the ‘tranquillity across the water surface…’. She gives us the sounds of her land, the ‘torong torong’ of the oars as boats glide across the water, parting the surface with melodies. Such lines are difficult to find, tucked away as they are in between tedious lines where pontification is mixed with lament.

I, a human, love my own self and wish to attain higher stages / Do not wish to cause trouble to loved ones, rather would accept anything / Others will love me as I love myself…

Grandness in thought and writing is sometimes tedious. But that’s what makes Birth a poem of her life—not because she writes about herself, but because she doesn’t. That would make her commonplace. Irom isn’t to be blamed. For she is trapped in her own image. Nothing short of ‘grandeur’ and ‘universal’ can be associated with her. Lost in translation, and lost in the narrative of her sacrifice, there she is, the frail woman with the tube in the land ‘where the abnormal is normal’.