That’s the right time to send it to the editor, says the bestseller man who writes in complete silence and pure isolation 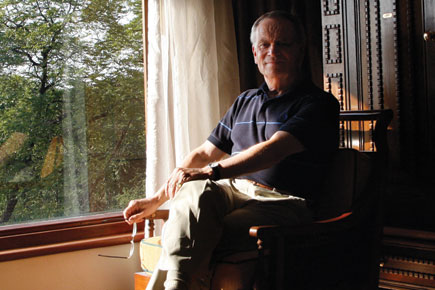 That’s the right time to send it to the editor, says the bestseller man who writes in complete silence and pure isolation


At 4:30-something on a Friday afternoon, it is the eighth interview of the day for the Baron Archer of super-Weston Mare. And the hopeful look on his face as he saw off reporter No. 7 down the long corridor of the Oberoi Hotel is replaced by a practised, polite smile. But first, says Lord Jeffrey Archer, by way of an introduction, “I will see the score. My team is playing.”

England is playing Bangladesh in the World Cup and coasting along at 130/3. Archer is satisfied, though he asks for the television to remain switched on without the sound. “You wouldn’t mind if I steal a glance now and then,” he says, and it is actually a question, I think, not a statement.

This is a man who is not supposed to be fond of interviews. Mariella Frostrup of The Guardian newspaper writes that Archer was so furious with her question on his perjury case that he puckered up and almost waited out the entire stipulated time of their luncheon interview in sullen silence.

I find the man opposite me, though, unfailingly, if resignedly, polite. Which is understandable, considering he is giving an average of seven interviews over 30 days of travel across India, Australia, New Zealand and the city of Hong Kong, to promote his latest novel, Only Time Will Tell. (“I have 11 slated for tomorrow, they tell me,” Archer says.) Then multiply that over a career average of a bestseller every couple of years since the chartbusting Not a Penny More, Not a Penny Less in 1975. If the publishing industry had its own numerical scale, Archer would be the unit for bestsellers. He’s sold so much, and for so long. (Think about it, Dan Brown was 11 years old when Archer published Not a Penny More… and JK Rowling, ten.)

And besides, you would remember, this is also the man who got elected to the British House of Commons at the age of 29, became nearly bankrupt at 34, and wrote his first book to escape insolvency. Later, he was picked by Margaret Thatcher as deputy chairman of the Conservative Party. He had to resign from this post in 1986 when a British tabloid called Daily Star said that he had slept with a prostitute, though he won the case in court and successfully sued the paper for damages. And in 2000, when he was standing for election for the post of mayor of London, he was found guilty of perjury (lying under oath) in an earlier case of libel and sentenced to four years in prison. He served two of those four before he was released in 2003.

With credentials of this calibre, you wonder why Lord Jeffrey Archer needs to give interviews at all. Yet, he sits opposite me, answering every question but one with civility and a direct gaze that never wanders round to the muted game on television.

It’s a bit of an exaggeration, he thinks, is his interview-reputation. “I’ve never walked out of an interview, or said ‘This interview is now over’.” And the time he glowered in silence at a girl from The Guardian? “Wait a minute, I remember that one. She called me and said we would speak about food and restaurants. And then midway through soup, she started asking all sorts of questions about the perjury case and my time in prison. That’s simply not on. She should have been honest about what the conversation would be about. Oh yes, that story is true enough.” Prison does seem to be a prickly topic with him, though. It is, in fact, the one question he refuses to answer: what his time in prison was like. “All I’m going to say is that I wrote three volumes of the Prison Diaries there and they sold really well. Some interviewers can be really stupid, like that girl before you. I felt like throwing her out of the window.”

But why, I ask, does he need to do them at all? Surely, he doesn’t need publicity to sell his books.

“That’s a fair point. I don’t need to do all of this, any of this,” says Archer. “ My publishers wouldn’t dare put pressure on me. But this time, I really wanted to myself. This is the first in a series of five books, and I thought I needed to see the first one off. Writing books is such hard work, you want it to pay off. That’s the reason I’m here, at 71, doing four countries in 30 days.”

March, he says, is his chunk of travel time between blocks of writing time. He spent January and February writing out the first draft of the second book of the Clifton Chronicles, as this series is called. On his return, he will finish the second draft in five weeks. After which, he travels to the United States to promote Only Time will Tell. By year’s end, the second book will be ready, he says, by then in its thirteenth or fourteenth draft. “And then, it goes to my editor.” That late? “Why would it be late? The earliest I let anyone see my work is the thirteenth draft. Before that, no one, except my secretary and me, has any clue about what’s going on. Not even Mary, my wife. ”

He’s that precise, and guarded. Not to mention, disciplined.

“I wake up at five-thirty every morning and start writing at six. I write till 8 am, then I breakfast. I continue to write till eight in the evening every day with similar breaks in the middle. My target is to get eight hours of writing done in a day. I relax a little over dinner, chat with my wife if she’s around. By nine-thirty, I’m in bed.”

Most of his writing happens in long hand and near isolation. Archer and his scientist wife Mary have a home in Majorca where he has built a completely sound-proof room, a little removed from the main home. That’s where he writes his first and second drafts, and if friends happen to drop by on those days, Archer makes them wait till 8 pm. Later drafts often happen at his home in Cambridge. “Sometimes, Mary and I write together but in separate rooms of the house. We don’t meet at all during the day.” He brings her up a lot, his wife Mary Archer. The other person he mentions more than once in the conversation is Margaret Thatcher. (If you say Margaret Thatcher is a fool, he had said earlier, he would throw you out of the room.)

He writes only one thing at a time, though short stories are different, “in the sense that I might write down an idea in three lines while I’m working on something else, but that’s it”. They are also somewhat easier than novels. But any kind of writing, Archer feels, requires discipline. The smooth-cheeked, trim-waisted, fiftyish-at-71 Archer himself lives a life that is almost severe. He doesn’t smoke, doesn’t have tea or coffee, and doesn’t even drink, really, barring the lone glass of wine at the occasional dinner. “I’ve never been drunk in my life,” he says. He’s been a runner from his late teens, and says he’s represented Great Britain in the hundred-yard dash. He stopped only recently, but goes for long, brisk walks. “While writing, I go for two hour-long walks on my breaks. The two other breaks are for breakfast and lunch.”

“No matter how sparkling your style and all the inspiration you look for, it’s determination that counts. That’s why I tell gifted young writers who come to meet me: ‘You have to shut out the distractions and roll up your sleeves and just write, and never ever show anyone your first draft,’” says Archer, determinedly looking away from the television as the publishers usher in interviewer No. 9 for the day.