Who keeps Kalachakra in the modern world? 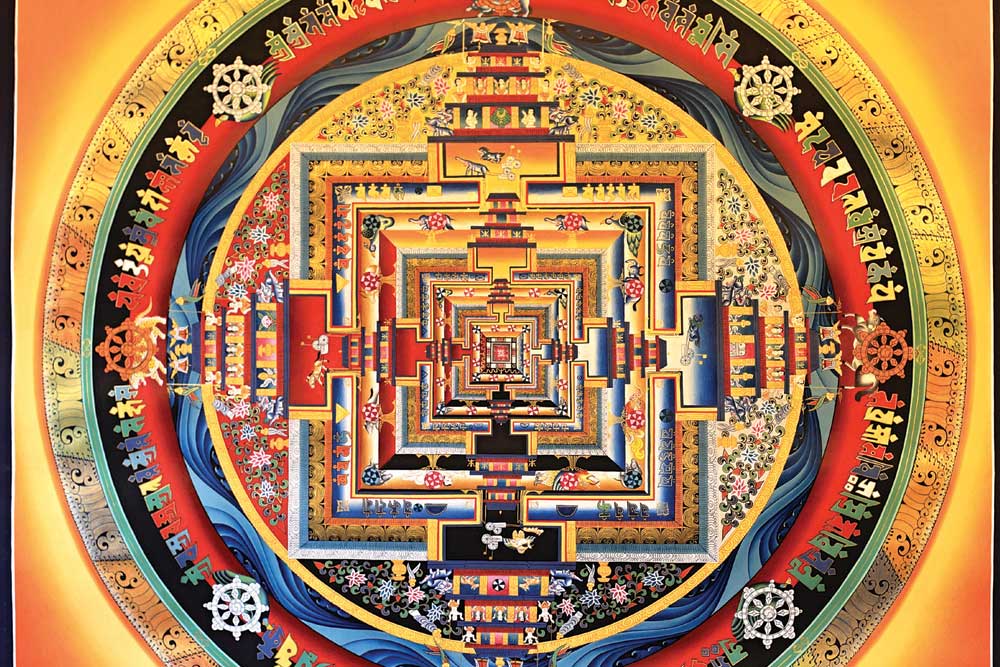 THE BUDDHA IS said to have preached during the last year of his life at a place called Dhanyakatakam in the present- day Indian state of Andhra Pradesh. One of his students at that event was King Suchandara, who had travelled a great distance from his kingdom in the north, a land called ‘Shambhala’.

The purpose of Suchandra’s visit was to learn something very special from the Buddha. It was called the ‘Kalachakra’— or the ‘wheel of time’. It was a technique by which non-celibates could work towards becoming Bodhisattvas, beings that could attain moksha at will. In fact, Suchandra’s kingdom, Shambhala, would eventually come to be associated with a pure and exalted realm that could be attained through an understanding of the wheel of time.

But why is time a wheel? Modern man thinks of time as linear, a straight line. But the ancients of the East realised that time was circular. Hindus have always believed that time moves in cycles and that each cycle has four great epochs or yugas—Satya, Treta, Dwapar and Kali. Once over, the epochs start all over again. Similarly, Buddhists see time as a mere measurement of change. A month is simply the change in the moon as it revolves around the Earth or a woman going from one menstrual cycle to the next. The great astronomer and astrophysicist Carl Sagan thus observed that Eastern faiths are ‘dedicated to the idea that the cosmos itself undergoes an infinite number of deaths and rebirths.’ Simply put, everything is temporary and impermanent.

In effect, everything that has happened will happen again. Everything that will happen has already happened before. Patterns in history repeat themselves. And that is why an understanding of Kalachakra is so very important in today’s world. One can observe Buddhist monks painstakingly creating intricate designs and patterns within sand mandalas that represent the Kalachakra. Oddly though, no sooner is the mandala complete than it is swept away by the monks. This is done to remind everyone of the impermanence of the world. Men and nations think that they create for all time but every great civilisation is eventually swept away. It would be worthwhile to remember this.

We often forget that our sun is just one star among the two hundred to four hundred billion stars in the Milky Way. We also conveniently overlook the fact that the universe consists of two trillion galaxies like the Milky Way. If we were to represent the entire universe as Earth, then Earth itself would proportionally be the size of a billionth of a pinhead. How is it possible that we can even entertain the notion that we are unique or separate?

Kalachakra reminds us that we are intimately connected to the ground that we walk on, the air that we breathe, the animals that surround us, the food and water that we consume and the billions of stars that envelope us. The universe does not consist of separated elementary particles but a complex network of relationships in which the observer has a very definite effect on the observed.

All phenomena in the world are manifestations of a fundamental oneness. All things are independent and indivisible parts of a cosmic whole. This is the key takeaway from the kalachakra, that nothing is isolated and everything has a consequence

Einstein had demonstrated the inter-changeability of matter and energy through his famous equation E=mc2, but after the discovery of the Higgs-Boson, scientists are now realising that the entire universe is nothing but energy. All so- called particles can be converted into other particles. They can be fashioned from energy and can disappear into energy. Classical notions of elementary particles or separated objects are irrelevant. The whole universe seems like a moving web of indivisible energy arrangements.

INDIAN SAGES KNEW that there is no self and that we live in an ocean of connected energy and consciousness. Bohr, Heisenberg and Schrödinger—the pioneers of quantum theory—regularly read Vedic texts. Heisenberg even stated that quantum theory would not look ridiculous to people who had read Vedanta. Our sages did not have sophisticated laboratories or supercomputers but they had something that today’s scientists may not have in abundance— perception. Perception is simply the ability to enter a deep state where one can experience the reality of the universe and realise how interconnected everyone and everything is. When the Upanishads talk of ‘Vasudhaiva Kutumbakam’—the notion that the world is one family—it is actually pushing the idea that everyone and everything are related. Distinctions and separations are false.

Some decades ago, the superpowers of the world thought that they could dabble in the affairs of distant countries without experiencing any blowback at home. The events of 9/11 and thereafter showed how wrong that notion was. Every action does indeed have a reaction. Today’s global terror factories are inextricably linked to the earlier actions of Western nations during the Cold War and beyond.

Similarly, it was possible for climate change deniers to paralyse the global community in endless debate on whether climate change was real or not. Instead, we are clearly seeing the ‘butterfly effect’ by which a melting glacier in one region can cause a change in local weather and crop patterns elsewhere, thus leading to an exodus of humans. Population growth, shortage of food and water and environmental degradation are no longer local problems that will only affect the countries that experience them. Unchecked, they will lead to wars, civil disturbance and migratory pressures globally.

The word ‘physics’ is derived from the Greek word ‘physis’. That particular word was popularised by the sages of the Milesian school founded in the sixth century BCE. The proponents of the Milesian school thought of physis as the endeavour of ‘seeing the essential nature of all things’. Modern physics gives us the notion of quantum entanglement. In an entangled system, two seemingly separate particles can behave as an inseparable whole and one constituent cannot be fully described without considering the other—like Shiva and Shakti or Yin and Yang. When Krishna spoke to Arjuna before the Mahabharata battle about one underlying reality called Brahman, interconnectedness is what he was referring to. It’s the same thing as Dharmakaya in Buddhism or Tao in Taoism.

All phenomena in the world are manifestations of a fundamental oneness. All things are interdependent and indivisible parts of a cosmic whole. This, then, is the key takeaway for the world from the Kalachakra—that nothing is isolated and everything has a consequence. We ignore the Kalachakra at our own peril.