Yann Martel on his fascination with animals, the Holocaust, and his new novel. 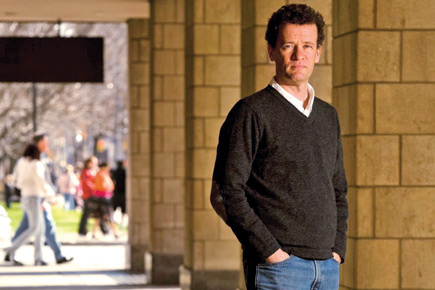 Yann Martel on his fascination with animals, the Holocaust, and his new novel.


Continents slide away as he speaks on a phone from Saskatoon, Saskatchewan, in Western Canada. The man who gave us Life of Pi is as much at home speaking about the caste system and the Holocaust as in explaining to an Indian that “one takes the wonders of India for granted”. Yann Martel speaks about his latest novel, Beatrice and Virgil, which is about animals, the Holocaust, the milk of human kindness and the lack of it.

Q Why a book on the Holocaust? There are so many good ones on the subject already—Sophie’s Choice, Time’s Arrow, etcetera.

A I’m not too sure about great Holocaust writing. The ones you mention are fairly old books too. There’s a lot more historical writing about the Holocaust which is very exhaustive, and there’s more that’s coming out. But I wanted to make sense of what happened in human and literary terms, I suppose—in the form of an allegory. I think that episode in human history tells us a lot about human evil, destruction and, at the same time, the greater human impulses of the need for generosity and kindness. In a way, I wanted to not only understand the Holocaust in terms of history, but in terms of a story, in terms of an allegory of human life.

Q Once again, there are animals in your new book. What’s your fascination with animal life?

A It comes from my interest in spirituality and religion. Animals are given God-like status in so many religions of the world. I don’t need to tell an Indian about that. Same goes for Ancient Egypt. Now, why is that so? I think it’s because we humans are far less cynical about animals than we are about human beings. And that’s a very useful thing for a storyteller. A good portion of the time I spent researching for Life of Pi was actually spent reading up on animal behaviour, observing them in zoos and listening to zookeepers. And I think that has also helped for this book.

Q What’s the difference in the animals in Life of Pi and Beatrice and Virgil?

A Here they speak, they have anthropomorphic features. In Life of Pi, they didn’t.

Q Is the religious way of life finished in the West? It’s become so fashionable to put down issues of faith in the liberal West. You’ve often spoken about according importance to our older systems of knowledge. What do you make of the current cultural scene?

A Life in the West has become a system of routines. Everything is a regimen—from school to work to retirement. In the midst of all this is a popular distaste for things that apparently run contradictory to the organised mechanism that is daily life here. Science and technology have so infused our lives here that our spiritual education has tended to suffer. For instance, science and technology may do lots of good things, but it doesn’t answer larger philosophical questions as to who I am or what I am to do with my life. This way of articulating things has also meant that art suffers. Nowadays, art has got reduced to a form of entertainment. Ordinary people put on the TV or watch sitcoms as an outlet. When you give up the realm of the religious-spiritual-artistic, you give up a key tool to understand yourself and human life.

Q What, according to you, would be the one lesson that has come out of the Holocaust?

A It told us more than ever that we need to be radically tolerant if the human race has to survive. We must be able to accept difference and live together. There’s no other go. It’s the same egalitarian principle that implies that caste discrimination must be completely eradicated in India. There’s not just a desire to be tolerant, but a need to be radically tolerant.

Q What went into the making of this book? What was your research?

A I read 80 books on the Holocaust. I visited Europe and went to Auschwitz and to Israel. That apart, I read accounts of survivors like Primo Levi, the World War II books of WG Sebald, and Holocaust survivor and Hungarian writer Imre Kertesz. The drafts were numerous. It came to a stage when I got sick of writing and rewriting. Then I thought it was ready.

Q We hear Life of Pi is being made into a film by Ang Lee. What if you turn out to be unhappy with the film?

A I trust Ang Lee. I read the screenplay, too, which I liked. If people don’t like the film, I can say “Read the book.” If people like it, I can say, “it’s based on my novel.” So both ways, I win! (laughs)