Sex, Goa, wild elephants and last but not the least, Khushwant Singh in his element. These are just some of the features that give this anthology a quixotic, rogue appeal. 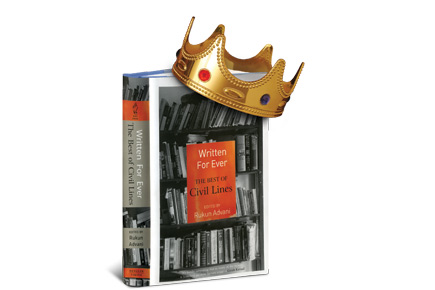 
What’s the thread that runs through this collection? The essays all appeared in Civil Lines, itself an anthology that turned up irregularly over a decade. Maybe that links them…? The editors evidently wrestled with this puzzle too. Their ‘Introduction’ to Civil Lines 3 alludes to the wrestling, concluding that ‘unfortunately we have noticed one or two links [between the essays]’: trucks figure in two. Trucks! They don’t appear in the others, though that absence is ‘made up for by the presence of relatives’. Trucks and relatives: threads enough.

This tongue-in-cheek-and-maybe-elsewhere-too tone of the ‘Introductions’ is one of the welcome charms of Written For Ever. This book starts by calling itself ‘the finest anthology of Indian writing in English that it is humanly possible to produce… the lodestar in a milky way strewn with stardust and rubble.’ Tongue definitely in cheek. But language like that serves to set the book up for a fall. And so you read it waiting for that fall. And you wait in vain.

Though there’s unevenness, sure, the troughs, first up. Some of the autobiographical essays here are simply self-indulgent. RK Laxman is a wondrous cartoonist, but his writing doesn’t begin to keep pace: why is it here? Why the great detail about Allahabad college anxieties in Arvind Krishna Mehrotra’s ‘Partial Recall’, even if it serves as the backdrop to a close friend’s tragic death? What makes his angst different (or differently-told) from, say, mine, I couldn’t divine. Khushwant Singh is intent on persuading his readers of the colourful struggle that was his childhood, down to cleaning his bottom after the act by scooting over sand dunes. Which left them ‘clean but full of sand’. Oh boy! In fact, Singh-watchers will hardly be surprised that bottoms and what they produce find plenty of mention in his essay.

Bill Aitken, whose other writing I’ve enjoyed, is strangely wide-ranging in his ‘Beating a Green Retreat’. We leap from Medha Patkar to blessing ‘Nehru’s aristocratic inheritance’ to pine cones to Charlie Chaplin—and all this in oddly stilted prose. This one left me scratching my head.

But there are the highs. Ladakh and Tibet are windswept mountain deserts, yes. But in Kai Friese’s and Tenzing Sonam’s essays, respectively, some essential sadness there leaves your mind somewhat, well, windswept too. Dark secrets uncoil inexorably in Susan Viswanathan’s ‘Something Barely Remembered’, unmercifully in Raj Kamal Jha’s ‘Blue Bedspread’, wistfully in Shashank Kela’s ‘Bougainvillea’. In their different ways, each story wrings you out. Manohar Shetty’s ‘Chinese whispering in Goa’ is laugh-out-loud funny. I’m married into a family with Goa roots, and Shetty’s characters and their gossiping ways, their lingo, even their names, could be from everything I’ve grown to love about that colourful corner of the country. ‘I tinksomen’ indeed. Suketu Mehta’s ‘Sexual History of an Accountant’ is a virtuoso reminder of the Victorian erotic romps we would devour as angst-ridden college kids. (Maybe I still do).

And one high point is when an ear-flapping tusker stops ‘less than the length of a cricket pitch’ from M Krishnan in the Mudumalai forest. Krishnan cowers in silence and fear, as, vicariously, do we. Until he realizes that this possibly savage animal is merely munching on the ubiquitous ‘touch-me-not’ fern.

A wild elephant. Little leaves that close up when touched. The endearing incongruity. This book in unexpected but somehow apt microcosm. I tinksomen.