Diana Preston on writing Mughal thrillers with her husband, the fun of pseudonyms and ethics of fictionalising history. 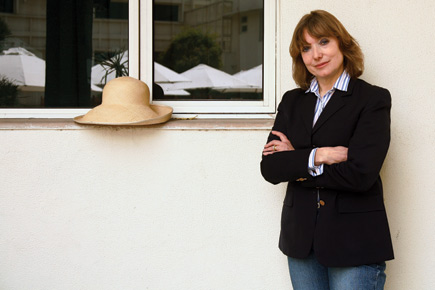 Diana Preston on writing Mughal thrillers with her husband, and the ethics of fictionalising history.


The Mughals are conquering British minds like never before. After Indophile William Dalrymple’s The Last Mughal, comes the Empire of the Moghul series, planned as a quintet. Diana and Michael Preston, who write under the pseudonym Alex Rutherford, will now be releasing the second book, Brothers at War. They were in India on a research tour. An interview with Diana Preston:

Q Why did you and your husband Michael choose to write under a pen name?

A With this series, we were moving into historical fiction. We’d earlier written heavyweight history books—The Boxer Rebellion and a book on atomic science (Before the Fallout: From Marie Curie to Hiroshima). So we didn’t want it to be confusing to people. It was kind of liberating to have a personality free of ourselves, a new front, so to say. We chose Alex since it was androgynous. As for the surname, Rutherford was one of the scientists we wrote about in Fallout. Alex Rutherford had a nice ring to it. Eventually, both of us really started to identify with this personality. He was quite real in our head. Sometimes, when discussing the plot or characters, we would even say, ‘Now, how would Alex go about this?’

Q Why the Mughals?

A Our interest really started with the Taj Mahal during our travels in India in the 1970s (they subsequently wrote Taj Mahal: Passion and Genius at the Heart of the Mughal Empire). Reading up, we realised it was an extraordinary story of a nomadic prince [Babur] who was destined to rule an empire, but didn’t have an empire. Humayun’s story for the second book, Brothers at War, was almost like a soap opera. The eldest son chosen to be his father’s successor, but with half brothers who didn’t see why they shouldn’t have the empire instead.

Q Is there a moral obligation to remain true to the facts while writing historical fiction?

A At the top level, you have to remain true to facts. All the main characters, those people know about, like Babur and Humayun, are real. Fictionalising these characters would spoil the book for readers. But at the level beneath that, we start making judgments as novelists. We create composite characters, the personalities of the characters. Then, there are lots of things we simply don’t know. For example, there are 12-13 years missing in Baburnama. I think in the context of what various chronicles tell you, it’s perfectly ethical to interpret the gaps, to invent the events.

A Oh yes, we largely went to Oxford University’s Indian Institute Library. They can find you anything there. We used the personal account of Humayun’s half-sister Gulbadan, for she wrote as she saw it. The later accounts were by people employed to write, so they were flowery and pages could go by telling you nothing. And, of course, there is Baburnama. In fact, I was travelling in Iran once with my copy of Baburnama (holding up a tattered, torn and well marked book). I don’t usually keep my books like this. But the bottom of the front cover and the back covers had endorsements by Salman Rushdie. There was even a foreword by him. I had to tear these pages off so my book wouldn’t get confiscated.

Q How do two people write a book?

A We really talk of the whole saga, break it down to each chapter, almost like a film script. Then each of us go and write our own bit, then come back and discuss and question some more. Each of us works to our strengths. I do more of the dialogues and we both write the descriptive passages. While I agree that writing is rather a lonely process, I find myself asking Mike’s advice quite often.

Q How do you compare your work with William Dalrymple’s The Last Mughal?

A It’s not like our own Mughal saga at all. In fact, I have great admiration for the depth of his research in the book. Actually, he’s one of our closest neighbours in London. Though we don’t know him very well, he’d once suggested a picnic at the garden where legend has it that Shah Jahan was thinking of building the Black Taj, on the other side of the Yamuna.