A daughter’s tribute brings to life the portrait of legendary filmmaker Bimal Roy: withdrawn, reticent, yet drawing out the most memorable of performances 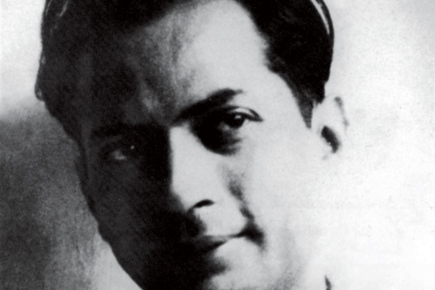 
Two words: Bimal Roy. That’s what made me pick up this book. We know his movies, but little is known about the man himself. Rinki Roy Bhattacharya, the filmmaker’s daughter, undrapes the curtains in this anthology. And it turns out to be an apt tribute by a daughter to her father on his birth centenary.

Bhattacharya, though, is upfront about the lack of information available on Roy’s childhood and youth. But the book abounds with charming nuggets. We get to know Roy was a ‘man of silence’. Strange for a director and producer who would have to interact with his crew to translate his vision. Yet, he got the best out of them all. That was Roy’s genius. Here’s a nugget that corroborates the man’s silence: noted editor and filmmaker Amit Bose once invited Roy and Bengali actor Chhabi Biswas for dinner. Biswas, another stalwart, was also known for his reticence. Bose says the two ate their dinner in complete silence and left, making him feel like an usher at a wedding. Another nugget is Roy’s penchant for cigarettes. The man packed a huge carton of Chesterfield or Lucky Strikes before embarking on any journey. ‘Cigarette was his alcohol,’ writes Nabendu Ghosh, novelist, scriptwriter and director who worked with Bimal Roy on several films. Roy died in 1966 of lung cancer.

Other notable contributors in the book are Kanan Devi, Mahasweta Devi, Naseeruddin Shah, Nutan, Ritwik Ghatak, Shashi Kapoor, Shyam Benegal, Tapan Sinha and the master himself, among others. We find out from their accounts that Roy began his journey from feudal Bangladesh (pre-Partition Bengal), moved to the transient 1930s Calcutta, and finally to his denouement in Bombay. He began his film career at New Theatres Studio, Calcutta, as an assistant to cameraman Nitin Bose in the 1930s. His first and most acclaimed work as an independent cameraman was PC Barua’s Devdas (1935), made in Bengali and Hindi. He turned director in 1944, with the Bengali film Udayer Pathe, which won Roy both critical acclaim and financial success.

After the collapse of New Theatres, Roy moved to Bombay. Soon after, he founded his own production company and with a small budget and relatively unknown actors, made the classic Do Bigha Zameen (1953). And then, he rained hits. Biraj Bahu (1954), Devdas (1956), Madhumati (1958), Yahudi (1958), Sujata (1959) and Bandini (1963) are some of his memorable films from that period. The popularity of these movies owes much to Roy’s ability to effortlessly fuse melody into the fabric of the story. Madhumati, which won nine Filmfare awards (a record till DDLJ bagged 10 in 1995), had 11 songs.

Amit Bose, Ritwik Ghatak, Salil Choudhary, Hrishikesh Mukherjee and Asit Sen are just a few names from his coterie. He chose talent, but respected their work without nagging supervisorial interventions. In his silence, there would still be tweaks. Tweaks that would make Dilip Kumar the eternally depressed renegade in Devdas, or Balraj Sahni the hapless farmer aching for his land in Do Bigha Zameen. Yes, there would be tweaks, and to this date, his subordinates swear by them.