Novelist Kiran Nagarkar’s once-censored play is in print at last, with a fast-paced new screenplay 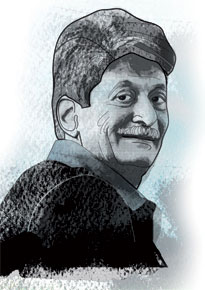 In the opening scene of Kiran Nagarkar’s trenchant play Bedtime Story—written in Marathi in the mid-70s, heavily censored, attacked by fundamentalist Hindu organisations, staged by small, experimental theatre groups in the 90s, and now in print for the first time in the author’s own English translation—the Chorus talks about ‘distance’ being important in theatre. ‘Nobody claims that the audience is either responsible for or conniving at what happens on the stage,’ says this sutradhaar, apparently pleading the case for convention, and insisting that nothing ‘unexpected, shocking or exceptional’ will happen. ‘We on the stage are the actors. Our business is to perform a play. You are the audience.’

Yet we can guess that all this is tongue-in-cheek. Stage directions have already informed us that as the Chorus speaks these anodyne words, he is sitting on a swing at the very edge of the stage; midway through his monologue, he starts swinging above the heads of the viewers in the front rows, while a group of Hell’s Angels-like interlopers stalk the aisles carrying chains and machine guns, to ensure that the play won’t be shut down by protestors. So much for distance. So much for the supposedly hallowed line between performer and audience—the line that allows viewers to temporarily bristle with indignation while watching a narrative about injustice but to feel at a safe remove from it. In this play, which subverts episodes from the great Indian epic the Mahabharata to make its angry points about discrimination, everyone will be implicated.

Apathy is a subject of Bedtime Story— written shortly after Nagarkar found his own political conscience awakened by global events in the 60s and 70s—and as he points out in his introduction in this new book, which also includes a screenplay titled Black Tulip, it would become a recurring theme in his writing. ‘With what fortitude we bear the misfortunes of others,’ mulls the protagonist of his most celebrated novel Cuckold. ‘What’s the use of keeping a tongue in your head if it doesn’t do its work when required?’ asks the Chorus in Bedtime Story. The play will later imply that it is possible to feel sympathy and outrage on behalf of an Anne Frank—to make her the poster girl for a cause—while still in the long run siding with the Nazis. And that those who look away from wrongs which don’t directly affect them may end up in a gas chamber of their own making.

With all the anecdotes about the stir created by Bedtime Story in the late 70s and early 80s, about private readings held in cultural circles, the play has acquired near-mythical status. None of its visceral power has faded, even though it appears in print at a time when epic retellings of all stripes—banal, hard- hitting, predictable, revisionist—have become a sub-genre of Indian English publishing. Nagarkar intersperses his retellings of the Mahabharata stories—such as Dronacharya’s attempt to ensure that the tribal archer Ekalavya doesn’t surpass his prize student, the pampered prince Arjuna, or the comical misunderstanding that results in Draupadi marrying all five Pandavas—with vignettes set in contemporary times. A modern-day Arjun, a medical student, is hunted by the incensed male members of his girlfriend’s family, but when they see a lower-caste man with him they forget all about their original quarry (much as one suspects that the Pandavas and Kauravas would temporarily have set their differences aside if confronted by Ekalavya’s tribe). A young widow in East Pakistan is raped, first by Pakistani and then by Indian soldiers. Another young widow tries to spearhead a corporate power struggle. And the Mahabharata narrative itself ends with God begging for release from the world—but not before He has been cuttingly rebuked by Draupadi, the woman he smugly attempts to ‘save’.

Nagarkar writes that he intended ‘no overt messages and no preaching. If there was anything worthwhile in what I had to say, it would come through like a slow-release drug over weeks and months’. As a reader in 2015, with no immediate experience of the climate in which the play was first written and performed, I’m not so sure about this. Bedtime Story is not heavy-handed, but I see it as a clearly political work that wears its concerns on its sleeve, and makes sharp use of irony and sarcasm. (“We are princes,” Arjuna tells Ekalavya, “This kingdom is ours. Its people are ours. Geography is ours. History is ours. The air is ours. You are ours.”) In this, and in its repeated shattering of the Fourth Wall to discomfit the viewer, it belongs to a tradition of radical theatre and cinema movements in the 70s and 80s which includes the work of Vijay Tendulkar, Mahesh Elkunchwar, Saeed Akhtar Mirza, and Govind Nihalani, among others. Nihalani’s film version of Elkunchwar’s play Party closes with a murdered activist, his tongue cut out, appearing in the nightmare of a complacent poet; the ghost staggers towards the camera with a bloody mouth. Mirza’s Arvind Desai ki Ajeeb Dastaan, about a poor little rich boy, sensitive but too passive to take a stand against his own class, ends with exploited carpet-makers staring at us accusingly.

It’s possible that Bedtime Story may have provided some inspiration to a cult black comedy that was, in its own way, a cry against the hegemony of the powerful. Fans of Kundan Shah’s 1983 Jaane Bhi Do Yaaro will recall one of the most guffaw-inducing lines from its climactic scene, a Mahabharata stage performance gone hysterically wrong: a villain dressed up as the Pandava Bheema says, “Draupadi tere akele ki nahin hai. Hum sab shareholder hain (Draupadi isn’t yours alone. We are all shareholders)”. In Bedtime Story: “We are all partners,” say the Pandavas, “and Draupadi is our capital.”

Like Peter Brook’s and Jean-Claude Carrière’s Mahabharata, a relatively straightforward stage adaptation that was written around the same time, Bedtime Story uses the technique of having actors play multiple roles; even slipping from one character into another before the audience’s eyes. (In Brook/ Carrière, Ganesha slips off his elephant-head mask to reveal the actor who will play Krishna; in Bedtime Story, an old grandmother removes her wig, puts on a little makeup and becomes a young woman.) Nagarkar also makes cheeky use of anachronisms: the scenes set in ancient times have references to aeroplanes and film festivals.

The play may be even more pressing today, as intolerance and fundamentalism grow, developed nations blithely plunder the earth’s limited resources, and the powerful— politicians, corporate, religious leaders—are accountable to no one. Self-interrogation is scarce too. The latest of many controversial bans in India, at the time of writing this review, involves the BBC documentary India’s Daughter, about the high-profile gang-rape case of 2012; the Government’s response, typically, has been to try to tuck the film out of sight rather than face the mirror it holds up to chauvinistic social attitudes. When Nagarkar writes, ‘There is something worse than callousness— an outburst of righteous rage which subsides just as easily as it had risen’, one thinks of how, in our own age, mass media and the internet have made superficial, responsibility-free displays of solidarity very easy.

After the intensity of Bedtime Story, the screenplay Black Tulip can be seen as light relief, even though it takes up two-thirds of this book. This is a script for a fast-paced film about two savvy heroines—con-woman Rani Agarkar and an efficient cop named Regina Fielding whom Rani hero- worships. (I couldn’t help seeing Rani Mukerji and Kangana Ranaut in the roles.) Though natural antagonists, they unite for a common cause, in a story that features cutting-edge technology involving hackers and firewalls, a pungent romance (with plenty of smart-alecky- bordering-on-cheesy dialogue), and a terrifically scary idea for a terror attack that could potentially affect millions of people. Nagarkar, who has been a film buff for decades, shows a keen visual sense, not restricting himself to dialogue and story but often detailing camera movements too—one description, for instance, has ‘a red streak of flamingoes’ flying past the sun followed by a camera pan over the bloody pool around a murdered woman’s slit throat.

Black Tulip may be Nagarkar Lite for most of its duration (which isn’t meant as criticism; the case can be made that this screenplay is a better example of his desire to not underline points for readers and instead let a well-told story do its work subtly), but at its end he engages in formal experimentation, offering us two possible endings. The first is tense and dramatic but eventually upbeat, and very much in keeping with the general tone of this sort of movie: the future of a whole metropolis is at stake, a bomb is defused just in time, the protagonists come away unscathed. The other ending, while still positive in its own way, is more low-key, less filmi, and a little more disturbing— with a suggestion that heroes don’t win unconditionally, that both Rani and Regina are small fry in a world where strings are pulled by powerful people in high places, that the privileged get away with much bigger crimes than a small- time thief could ever dream of.

In a sense then, what Nagarkar says in his afterword is a sardonic return to the concerns of Bedtime Story: ‘Let us common folk be grateful for heist movies which allow us to lead proxy lives through Rani and others who outsmart cops and the system […] but, unlike the shameless CEO-cum- stupendous con artists, are ultimately corralled by the law.’ Are these words (a coda to a screenplay for a breezy mainstream movie) just as dark and cynical as the verbal barbs of the Chorus in Bedtime Story (a subversive non- mainstream play)? Read this double bill, which represents two faces of the same writer, and decide for yourselves.

(Jai Arjun Singh is the author of Jaane Bhi Do Yaaro: Seriously Funny Since 1983)