The Return of the Legal Thriller

After more than a decade of dull books, John Grisham strikes his original form again with a deeply satisfying read 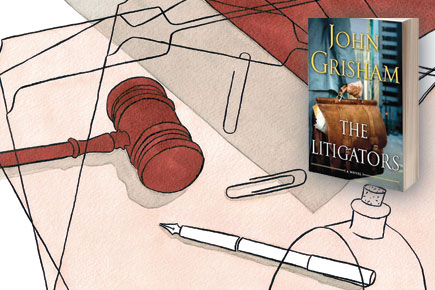 After more than a decade of dull books, John Grisham strikes his original form again with a deeply satisfying read


Finally, on page 92, after a long, tense stretch, with hope rising warily, my heart began to sing. After all these years, a real, super-duper John Grisham! Since The Street Lawyer in 1998, he’d turned out more than a dozen duds. It seemed as if his steam had run out. Eager readers leapt on each new title with anticipation—only to recoil, disillusioned. Had he lost it? Was he holing up (in the Caymans, perhaps), sated, exhausted, and having outsourced his brand and pretty straightforward formula to a team of lesser writers without the ability to cast the spell of the master? One damp squib followed another, managing a slight spike with The Last Juror.

Now, finally, the real Grisham is back. David Zinc, hero of The Litigators, is an overworked lawyer at a plush Chicago law firm. His hourly billing is $500, and, like others of the tribe so familiar to Grisham readers, he’s so overworked that, as his financial assets multiply, his health and family stay neglected. In another—faraway—part of town, Oscar Finley and Wally Figg run a ‘boutique’ firm and practise a form of law best classified by the name of their dog AC—short for Ambulance Chaser.

Grisham was responsible, long before Ally Beale, for bringing phrases like ‘ambulance chaser’, ‘probate’, ‘file a motion’, ‘deposition’ and even ‘DUI’— drunk under the influence—into the mainstream consciousness of readers in India. Through his stories, we’ve become familiar with any number of situations which engender hatred, arrogance, greed, revenge and other emotions that underlie the territory that lawyers deal with. Grisham’s books have introduced us to a range of situations in civil and criminal law, product litigation, homelessness, the agony of awaiting the conclusion of a death sentence, the drama of verdicts overturned by appeals, and much more. The dip in his readability followed his move from the fast-paced legal thrillers he excelled at writing to books that continued to be based on law but began to focus more on other issues that interested him, such as baseball, a lifelong passion, and America’s rural south, where he grew up, the second of five children of a construction worker and a homemaker.

Even in his ‘blockbuster’ books, Grisham has always been a bit of a social activist. There’s invariably an underdog whose eventual triumph the reader experiences vicariously. Important characters often bear major real life-type burdens, such as a loved one in prison, a one-night-stand, or some other example of human frailty we need to forgive and live with. Bonds within families, particularly between couples, are strong and satisfying.

Through plot peaks and lows, Grisham’s language is laidback and unselfconscious, with a liberal sprinkling of cute phrases. It may not be high literature, but you won’t find smut or graphic violence either. There’s not much in a Grisham book that you might want to shield your children from. And in 2010, in a superb marketing move, Grisham wrote his first book specifically for children, introducing the child lawyer Theodore Boone. Theo is a 13-year-old schoolboy and he knows more about the law than most lawyers in his city. Young Lawyer was great fun, and, under the guise of a racy plot, covered the basics of court procedure and etiquette as well as some common US laws. Reading it, more than one Indian pre-teen I know dived straight into adult Grisham books, devouring them stealthily under the bedcovers instead of preparing for their unit tests, having placated their proud parents with the thrilling news that they had decided to become lawyers when they grew up.

Sadly, the next Boone book, The Abduction, released earlier this year, did not live up to its predecessor. It was good to meet familiar characters, but the plot just did not have teeth—a situation Grisham fans had no choice but to resign themselves to while they waited stoically for his next. Classic Grishams, the Boone books also incorporate human weakness and emotion through different family formats.

David Zinc, too, is a typical Grisham hero—young, brilliant, handsome, likable. Remember Mitch McDeere in The Firm? Like him, David is also a graduate of Harvard Law School; he’s also married to a warm, supportive, intelligent (and beautiful) woman with whom he shares a loving, passionate relationship. Like Rudy Baylor in The Rainmaker, David has no trial experience whatever, but his performance in court showcases his hard work, ingenuity and fine legal brain as he takes on a veteran with an impeccable track record. As with Clay Carter in The King of Torts, there are moments you will tremble for him, fearing all is lost.

David, by a strange turn of events, has joined Finley & Figg just as Wally is preparing to file a suit against Varrick, a pharmaceutical giant. Varrick has survived a $400 million settlement for a denture cream that caused zinc poisoning; a $450 million settlement for a stool softener that backfired and clogged things up; a $700 million settlement for a blood thinner that cooked a bunch of livers; a $1.2 billion settlement for a migraine remedy that allegedly caused high blood pressure. Finley & Figg, on the other hand, is a law firm that a clerk describes as ‘…a two-man ham and egg operation; advertises for quickie divorces, DUIs, the usual criminal domestic, injury practice; no record of any filings in federal court in the past 10 years; no record of jury trials in state court in past 10 years, no bar association activity; they do occasionally go to court—Figg has either 2 or 3 DUIs in past 12 years; firm was once sued for sexual harassment, settled,’ to an incredulous judge to whom Wally’s case has been assigned.

The Litigators is a story about how the ‘mass tort’ business works. A bad drug is identified. The plaintiffs’ lawyers go into a frenzy, rounding up cases. Lawsuits are filed. The big defence firms respond with an endless supply of expensive legal talent. Both sides ‘slug it out’ until the drugmaker gets tired of writing ‘fat checks’ to its lawyers. As things get settled, the plaintiffs’ lawyers ‘rake in huge fees’, and their clients get far less than they’d expected. When the dust settles, the lawyers on both sides are richer; the company cleans up its balance sheet and develops a replacement drug.

The Litigators is steeped right through in the soothing tones of the underdog singing hallelujah. David rescues himself from the rat race; he resurrects the dubious Finley & Figg; he finds suitable alternative sources of income; he achieves justice for illegal immigrants being exploited by their employers; he wins a handsome settlement for the immigrant parents of a victim of lead poisoning. He even earns solidarity from a former colleague, which enables him to stand up against a hacker who insulted his wife.

Some Grisham books end abruptly, leaving things to the reader’s imagination—but not this one. All ends are neatly tied up, with realistic and fulfilling outcomes for all.