The Mythology of Being 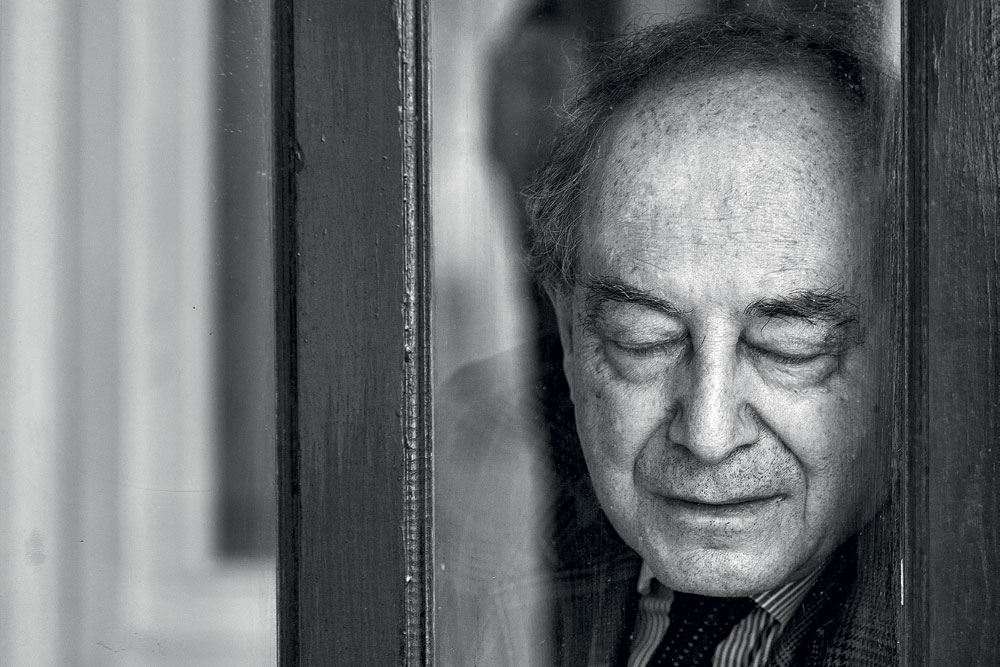 
I HADN’T HEARD FROM Roberto the last few months. I don’t even know what he died of. He was six months younger than I am. It’s always shocking when someone your age dies, especially when you didn’t even know they were ill.

I didn’t read him until he read me. He got in touch with me and wanted to publish my first book Siva: The Erotic Ascetic (1981) in Italian. And that was actually how we met. And then when he was writing some of his books about India, he sent the early drafts to me. And we discussed them together. His book Ka: Stories of the Mind and Gods of India (1998) is one of the best books about Indian mythology; he sent me early drafts of it, and I saw it and made one or two suggestions. It was already a fabulous book. So, we corresponded about our books, about the books I was writing that he published and about the books about India that he was writing, and only after that did I read The Marriage of Cadmus and Harmony (1993), the book that made him famous. I came to it sideways, by reading his Indian books as he was writing them. He kept publishing all of my books in Italian.

Ka is so good because, first of all, he gets it right. There are a lot of people who write about Indian mythology and they don’t know what they’re talking about. And he does. He says that he taught himself Sanskrit. I don’t know how good his Sanskrit was. But he knew enough, so there aren’t any mistakes. And aside from that, he has an insight into the way that mythology works. I think he started with the Greeks, with Cadmus and Harmony. He imagines them as people. He writes so well; you can see the scenes happening. You can see the emotions behind them. He writes the story so that you’ll keep turning the page to find out what’s going to happen. I’ve never seen such a combination of genuine scholarship and a flair for making a book fun to read. A lot of people have one, but not the other. I’ve read Ka several times over the years and it’s always a pleasure to read. It’s fun to read the way a good novel is. He wrote about topics I knew nothing about. And I’ve tried to read about those too. But the ones I keep re-reading are about India and Greece. 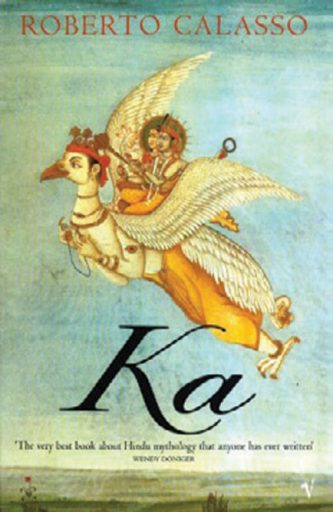 He was attracted to the myths of India and Greece, because he loved fantasy. He was a very funny combination. He was a very good publisher, a man of business. He knew how to run a company, so he was practical. But at the same time, he had a fantastical mind. He liked the extremes. He liked the passions. He liked the violence, he liked the love, he liked the magic, the transformations. He had a real imagination, of a particular Italian kind. It reminds me of Verdi. His books are like Verdi operas to me. They have the same flair, the same music, and the same, at times, impossible plots. It was his character. He was not a big man. He was so elegant and had such an elegant face too. He was always very natty, very well dressed, but his head was not neat. His head was imaginative and appreciative.

He discovered all sorts of writers that no one had ever noticed before. He just saw some flare, some flames shooting up out of them that he admired and that he nurtured. He was not just a prima donna in his own right, he was very nurturing of other talents as well as being a great publisher. He translated into Italian people that had never been translated into any language but the language they wrote in the first place.

Roberto was always interested in the book that I was going to write. He took the books that I had written and he didn’t do a lot of editing. He had a very good translator, and my Italian is quite poor, so I trusted him to get it right. But then he would say, ‘What are you writing next?’ And I would say, ‘Well, I’m working on a book about this.’ And he would love to talk to me about where the book was going, and often had some very good ideas and suggestions. He never told me what he was writing. I’d ask him and, he’d say, ‘Oh, I’m just working on something now.’ He didn’t want to discuss that with me, so it was a one-sided conversation in that sense. But he made several good suggestions when I told him things I was going to write. He was a very creative person to talk to when you were just planning a book. You could brainstorm with him. We did that in person when we met, and we did it on the phone. You couldn’t call him directly. He always had a secretary. She’d call and say, ‘Mr Calasso wants to speak to you.’ I always enjoyed those conversations.

I have been working on the Mahabharata book for years. I’ve just finished the manuscript and I am sending it to my publisher, Ravi Singh [of Speaking Tiger], today [August 1st]. And Calasso and I did talk about the Mahabharata book, about its translation, and the question about where to begin to cover the final books. The place to begin is actually the middle of book 15. He agreed that I should start there. That’s where the action begins. I tried translating some of the earlier chapters, but they weren’t very interesting and I realised: as usual Roberto was right. That was the last book that I discussed with him.

HE WAS A child during World War II, so he knew about Fascism; his father was imprisoned by the Fascists, and later the family had to flee from Italy. Roberto was a great liberal, among other things. He didn’t write about war as much as he wrote about religious rituals of sacrifice. But war was always there in the shadows.

I know his wife Fleur Jaeggy [a Swiss author, who writes in Italian] and she’s a brilliant woman, who has written some beautiful, beautiful books. He chose as his partner a formidable woman, also very imaginative and a little dark in spirit.

I visited him in Milan on several occasions. He came to New York. He was a wonderful man and a very precious friend. I went to his home, which was this amazing sort of winding, complicated little palace of rooms and rooms and rooms with books and books and books and books and wonderful books. He also had a collection of old books and first editions. Those were not books you actually read, they were books you had. He was proud of those and there was a special case in a special room. He had beautiful old first editions, I think he had Joyce’s Ulysses. Besides having books about everything in the world, he had books that were precious objects and were of historical significance.

He once took me to the best restaurant in Milan. I was going to order something Italian. He said, ‘No order a steak.’ And I said, ‘In America, we do steaks.’ He said, ‘Trust me.’ Of course, it was the best thing I ever had.

On one occasion I was in Venice. The Teatro La Fenice had just reopened after being closed for repairs for several years and they were doing Wagner’s Parsifal on a Sunday afternoon, and we could not get tickets for love or money. So, I called Roberto and I said, ‘Can you get tickets for me and my friend?’ He said, ‘I’ll try, go to the box office.’ So we went on that day wearing our travelling clothes and sneakers because it was an afternoon. And because we are American! The lady at the box office did not like the way we were dressed. And I said, ‘Well, I think there are tickets left for me by Roberto Calasso.’ She looked up and she gave me the tickets. She looked at the tickets and she looked at me. She said, ‘You certainly have friends in high places.’ We took the tickets and walked in, and we were in the royal box. Everyone in the theatre turned to look at us to see who it was. And with one voice my friend and I said, ‘I wish we had dressed better.’

When we were in New York we went together to have dinner at the home of Sonny Mehta, also a great publisher. When we got there, it was just us and Sonny and his wife Gita, who wrote Karma Cola. I was pleased to meet both of them and then there was a man just sitting on the couch who really wasn’t introduced. He was already there. I thought he was a brother or something. We had a wonderful conversation with Sonny and Gita Mehta. I never spoke to the other man. I didn’t know who he was. Afterwards going back in the taxi, I said to Roberto, ‘But who was that man on the couch?’ And he said that was Oliver Sacks! He said, ‘So I’m with the woman who mistook Oliver Sacks for a hat.’

I was in touch with him during The Hindus: An Alternative History [In 2011, a lawsuit was filed against Doniger and Penguin books on the grounds that the book intentionally offended or outraged the religious sentiments of Hindus. Penguin recalled the book]. He made of the court case what any sensible person made of it: Penguin had made a mistake. He offered to talk to people. He felt that it was an important fight and I think if it had been in Italy, he would have fought it. So, he backed me up and consoled me. He was very supportive. As a publisher he felt that Penguin had made a bad tactical mistake.

As a publisher, he was also an extremely well-read man. So not only like the rest of us did he read all the good books that had been published in the past, but he read thousands and thousands of manuscripts of what was being written now, and, in order to make a living, he knew what sold, and so he had a sense of which books were reaching people and moving them, and which books no one wanted to read. He read so much that was contemporary, I would call it pre-contemporary, that which hadn’t even been published yet. So, he did have an eye for what people would be interested in, and I think that’s one reason why people have always been interested in his books. He chose the right topics and he wrote very clearly. He never flaunted his extraordinary knowledge so that you have to go and look up words. His books are very reader friendly. The great success that they had was partly because he knew how to write a book that people would want to read, which is a great skill that a lot of good writers don’t have.

(As told to Nandini Nair)

Wendy Doniger
Doniger is an author and Professor of History of Religions at the University of Chicago, US