Vikram Chandra finds solitude annoying when he writes, but admits to not being a collaborative enough person to work on movies. He writes 400 words every day, adamant that writing is about a steady pace, not a stroke of inspiration 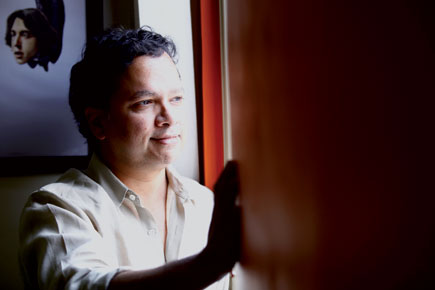 Vikram Chandra finds solitude annoying when he writes, but admits to not being a collaborative enough person to work on movies.

After spinning a magnificent yarn about a police inspector and the dark world of encounter killings in his 2008 tome Sacred Games, Vikram Chandra returns with a new book, this time about his love affair with computer programming. Mirrored Mind: My Life in Letters and Code explains the logic behind computer programming and how Chandra’s two passions—writing and coding—meet. Chandra tells Open why he doesn’t enjoy the craft of writing and why he insists on writing 400 words every day anyway. Excerpts:

Q Do you jot down every stray thought that comes to your mind?

A I jot down everything. I carry a tablet and a notebook and I write down everything I want in [those]. I may be jotting down stuff I find in an archive library, or taking notes during an interview (even though I record those). The best thing about electronic devices is that when you work on a book for many years, archiving things you may be writing down gets really hard. I worked on Sacred Games for almost a decade and I was used to writing everything down in thick reporter notebooks, and by the end of it, I had 24 of those. If I had to fact check anything, I had to go back and search for the information. In a tablet, everything is retrievable, and it recognises your handwriting.

Q Your mother, Kamna Chandra, wrote Yash Chopra’s Chandni, among other films. Growing up, what did you learn from her as a writer?

A My earliest memories are of her sitting on the kitchen table and writing on large pieces of paper. At that time, she used to write plays for Doordarshan. Writing and reading was always present in the house. It was because of that I knew that the stories you read in books are actually produced by real, living people. So you realised you can do that too. That’s why I started writing pretty early on too.

Q What did you first start writing?

A My first published story was a sci-fi [story], when I was around 12. I was in the boarding school Mayo, and my story got published in the student-run magazine. Once it got published, it became attractive to do this, as people were actually reading my stuff. The feedback from people was the kick I loved. Suddenly I wasn’t an anonymous little worm in a big boarding school. All the older guys would talk to me about my stories, and that was great.

Q What do you think about the notion that a writer writes best in isolation, like maybe on a deserted island?

A It has never worked for me. I respect that some people need solitude to write but I find solitude annoying. I have a garage at the back my house in Oakland near Berkeley, and when I am there, it is quiet, but I can still hear the kids and the world. Before that I have always liked writing in places where I can sense the world around me, but still be isolated enough to concentrate. I have tried going off to write but it drives me nuts, and I don’t feel like I have enough access to resources I may need.

A writer needs to be disciplined. Everyone has a story to write. But the difference between a writer and a non-writer is that a writer writes. You have to treat it like a job. If you sit around waiting for inspiration, nothing will happen.

A When I can do it, I like having a schedule. I like to produce a set amount of words every day. I start as early as I can; I start working right after breakfast. I try writing 400 words every day, which is not much, a little over a page. It takes me a lot of effort to write those, as I knock off stuff too. So if I have done 400 words, I have a holiday for the rest of the day.

What happens when you do it like that [is that] you can maintain a steady rhythm. If you write 3,000 words one day, it may happen that you have nothing to say the next few days. So my standard line about this is that ‘writing a novel is like running a marathon’. You just maintain a steady pace.

There is nothing magical about the 400 words—just set a target, and do it day after day. I work six days a week, and then keep at it, month after month, and miraculously, one day, you have a book ready. It all keeps you away from distraction. The world is very tempting as a freelancer. The fridge is calling, or you want to check the news, and before you know it, the whole day has passed away.

Q You may not want to seek inspiration, but what about the times you really need it?

A What I mean by that is that even when you don’t feel like writing, you write. But I read a lot, I watch movies, I listen to music—sometimes all that mixes together in your conscience. It’s like putting fertiliser in a field. Two days later, you will be in the shower, and something will pop up, and it will be a mixture of all that’s in your head.

Q Did you ever think about a writer you wanted to be like?

A I was inspired by my mother. I always had an example of a writer in front of me, but she would be the first one to tell you that you can’t make a living by being a writer. I was always doing it since I was 11, but I didn’t know it was viable. I was just doing it for myself. Luckily the world changed, and I got [the scope to do] it like I do. But I would have always come back to being a writer. I get restless when I don’t write, and get short tempered. It’s an itch. I have to write.

There have always been writers I have admired. I discovered [Ernest] Hemingway when I was very young, and I wanted to get that feeling and depth you get when you read him, and that narrative. That’s what I wanted to do, and I did that. My absolute favourite book of the past few years is Wolf Hall by Hilary Mantel. What she achieves in that book is a richly textured portrayal of an entire world. These people are different from us and see the world differently, but at the same time, she makes that world vividly alive. I love how she encapsulates a very high level of dirty politics. That’s the stuff I admire. You write the stuff you enjoy. What I would like to do is produce a book that would have the same qualities as that.

Q Do you write differently in different cities?

A No, I am lucky like that. I am not attached to places and rituals. I have written in airport lounges and hotels. As long as I have a laptop, I can do it anywhere.

Q What does your desk at home look like?

A It’s very untidy. It has three very large monitors. It’s like a geek thing. You can have your main document open on one, and your reference document open on the other. It makes you more productive. I have decent a sound system attached, so I listen to music. During Sacred Games, I played a lot of Hindi music from the 1960s and 70s. Nowadays—I don’t know much about Indian classical, but I am trying to listen to that now.

A My experience with film is positive but I am not a collaborative kind of person. As a fiction writer, I am used to having complete control over the content. Film and television both are industrial arts, and the amount of money put in is so large that you have to think about what the audience likes, what works and what doesn’t. Who am I selling to, how much I am a budgeting, and who is my customer? It’s all about costing. That whole world seems very foreign to me. Writing a screenplay is very different. It’s not art, it’s a blueprint. It’s a director’s medium. What works in a screenplay is very different from what works in fiction. You have to learn how to think in a different way.

A I don’t think anyone does, it takes a lot out of you. I always quote a friend of mine, an American poet called Robert Hass: ‘Writing is hell, but not writing is hell. The only satisfactory state is just having written.’

Q What is the one question about writing you are often asked by your students?

A People often ask, ‘What do I have to do to write?’ I just say, ‘Read a lot. Write a lot.’ One of my major teachers, fiction writer Donald Barthelme, always got this question—‘How do I know I am a writer?’ He always told people bluntly: ‘If you can manage not to write, then you should not be a writer.’ It comes from… compulsion. I don’t want to romanticise it, but it’s an urge—even writers don’t understand it.

Q What do you know about writing that you didn’t know before?

A The more you do it, and the more you critically read other people’s work— and how people read your work is important. That’s why workshopping works—even if it’s just between three friends. Read something you love ten times and you can figure out what is working [for] that book. It helps you in your own writing.

Q Do you ever write plot points and character sketches before you start writing?

A Never. I have images in my head. Like with Sacred Games, I had this image of a cop talking to a gangster in a concrete bunker. Then I started asking these questions—who is here, why is he there? I always start with hazy things and then grind through them to come to the other side.