Liberating Jayalalithaa from the image trap 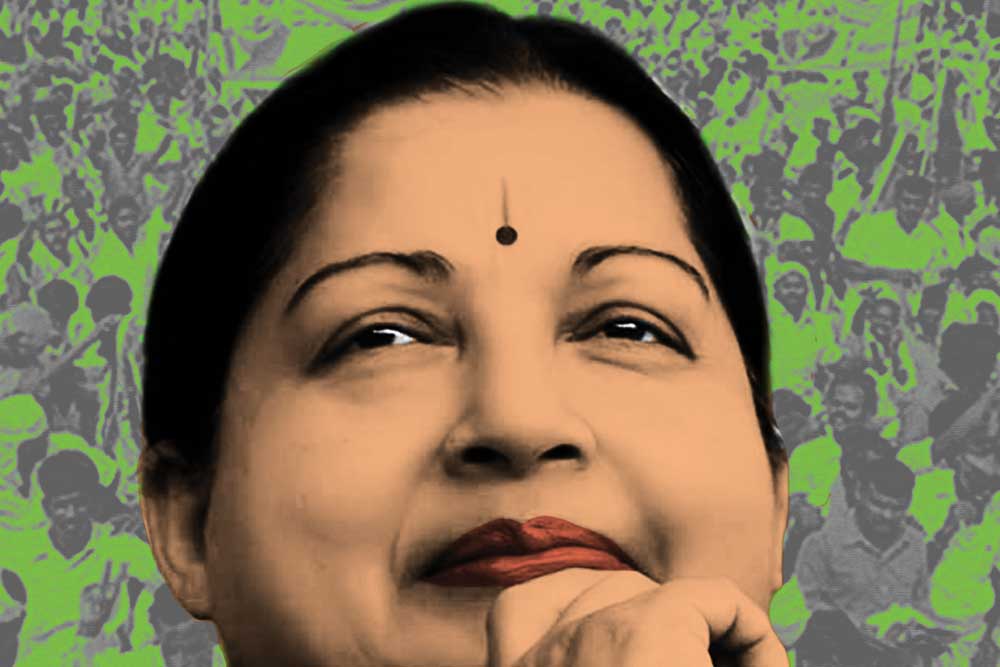 TO READ ABOUT Jayalalithaa’s life is to enter the psyche of a woman who declares war in a field where men dominate and make the rules. Most observers would credit her political success against such odds to sheer ambition, a word that grows heavier with judgement when ascribed to a woman. Vaasanthi dumps this cookie-cutter analysis of women achievers and brings her protagonist alive in Amma: Jayalalithaa’s Journey from Movie Star to Political Queen. In trying to unpeel the layers of the enigmatic leader of Tamil Nadu, Vaasanthi reveals a complex person who is motivated in equal parts by intellectual pursuit, love, competition, identity politics, vengeance, and indeed, a particularly female defiance born in response to relentless male aggression.

As a journalist, Vaasanthi first met Jayalalithaa in New Delhi in 1984, when the latter was a parliamentarian in the Rajya Sabha. She had her own tape recorder, and bristled at direct questions. She later called Vaasanthi on the phone to add a line with the stern order: “Just write as I tell you.” It serves as a portent of her infamous hostility to the media.

The book is rich with such anecdotes, collected through interviews with two of Jayalalithaa’s school friends, her Public Relations Officer ‘Film News’ Anandan (she was the first actor to appoint one on a regular salary), her speech writer Solai, and Vaasanthi’s own reportage as the editor of India Today’s Tamil edition for 10 years from 1993. It also draws a perspective from Jayalalithaa’s own unusually open memoir serialised in the journal Kumudam.

Amma begins in the sepia-tinted world of Ammu, the academically gifted, well-mannered Iyengar Brahmin girl who lost her father at two. Growing up in Bangalore and Madras, she was desperate for her actor mother’s attention. But when Ammu became a beautiful 16-year- old, she bent to her financially strapped mother’s requests, gave up a state scholarship and became an actor herself. Films themselves were easy —Jayalalithaa was spunky, beautiful, and talented. “There was no intermediate or struggling period for me,” she says in an interview. “Overnight I was famous and fabulously successful.” But privileged, precocious and upper-caste as she was, she balked at the hierarchies in the film industry, committing such grave transgressions as sitting with her legs crossed, reading a book as a senior actor entered the studio. Come matinee idol MG Ramachandran (MGR), though, everything changed.

Here the rigorously researched book shines with empathy and remarkable insight. From the description of the nervousness of a 17-year-old acting her first ever scene—a wedding night— with MGR, 35 years her senior, to his overbearing and jealous control over her film career; from her pestering him to marry her, his irresponsible promise that he later reneged on, to Jayalalithaa’s grovelling love letter that was leaked, Vaasanthi teases out the dynamics of a consensual but tumultuous relationship that was never quite equal.

MGR was initially in the Dravida Munnetra Kazhagam (DMK), and later split it to form what is now the All India Anna Dravida Munnetra Kazhagam (AIADMK). As he became busy with politics, Jayalalithaa was finally free to work with other top actors, and do as she wished. By 1973, they had parted, and she pursued a serious relationship with Telugu actor Shoban Babu, younger than MGR. This relationship ended soon, partly because Babu was married. Broken and humiliated, she took a hiatus for a few years, and finally had little option but to rejoin her mentor. Vaasanthi tries to explore this return, and the inevitable shift to politics. She writes briefly— too briefly—about Jayalalithaa’s coincidental meeting with MGR in the United States and ‘a change of heart’ that brought the protagonist back into the limelight, this time, through politics.

Apart from MGR, only Jayalalithaa— with her closeness to him—seemed to spin magic for the AIADMK in election rallies. MGR needed her oratory and organisational skills, but he also feared being taken for granted. He makes her propaganda secretary, she makes a misstep, he fires her, she wins his trust back, he then reinstates her. This pattern repeats itself. In a personal letter that was leaked, Jayalalithaa writes: ‘Please don’t be angry with me. Who else is there for me? Where will I go leaving you? Am I not your own Ammu?’

The popular narrative of Jayalalithaa’s rise in Tamil cinema and politics portrays her as a temptress. RM Veerappan, MGR’s close aide—whom Vaasanthi calls ‘a snake in the grass’—considered the young woman a ‘manipulator and oppressor’. Fascinatingly, the voters seemed less morally judgemental of Jayalalithaa. She was called ‘anni’, or brother’s wife—a moniker she embraced openly.

After MGR’s death, however, her colleagues began to openly humiliate her. At 38, ‘she, who had been looked upon by the party cadres as a natural successor to their beloved leader, was now a non-entity, fighting to have a glimpse of the departed leader’. She accused MGR’s wife Janaki of poisoning him, provoking a protective rage from the men in the AIADMK. Jayalalithaa could have lost her political career over this personal battle. But she used her popularity to claw her way back to the top.

To convince the polity that she was MGR’s chosen one, Jayalalithaa often narrated an incident. When she was planning to leave political life, she said, MGR had placed her palm on the picture of his mother, forcing her to take a vow not to quit politics. Her chief in-party opponent RM Veerappan, Vaasanthi writes, insists that the incident was made up. But this was Jayalalithaa’s way of appropriating MGR’s legacy.

THROUGH IT ALL, the DMK kept up its perverse, sexist attacks that turned physical more than once. Many of these—the tearing of her sari in the state legislature, the slap by Janaki’s nephew, the shaming and abuse—are well-worn stories. Vaasanthi refreshes this otherwise sordid history by dropping the sensational gaze, reminding us how vicious Tamil Nadu politics used to be, and how tremendous Jayalalithaa’s stubborn fight was. It also explains why she grew more reserved, more hateful of the media, and so untrusting of colleagues that she ‘was fast losing sight of the ground beneath her feet’.

Even as the book offers a rare gendered appreciation of Jayalalithaa as a mass leader, it critiques her terrible excesses as Chief Minister. Her vindictive competition with DMK’s Karunanidhi fuelled overnight transfers of administrators and policy reversals, and the frail old man’s violent arrest at 2 am remains etched in collective memory. Intolerant of any dissent, she allegedly had bureaucrats attacked with acid, had presses ransacked, filed hundreds of defamation suits against journalists, and ended the career of party members at the drop of a ‘but’.

By this time, Jayalalithaa had become Amma, the AIADMK supremo, an icon to be deified and feared. The section that charts this political transformation is a thrilling précis of her dramatic actions. But it does not have the interiority Vaasanthi manages in the personal history through creative and astute storytelling. Amma is a tough assignment today: she does not meet the media, colleagues and friends like Sasikala (‘the woman who knew too much’) rarely speak, and legislators are mere placeholders as her administrative decisions are single-minded decrees. Still, few journalists know the leader like Vaasanthi does, and one wishes she had analysed what drives Amma’s policy efficiency, why she adopted Sasikala’s nephew, how this devout Brahmin imbibed Dravidian politics, or what makes her incapable of delegating work. The primary threats to her career in the past decade of the DMK’s decline have been her many corruption cases. How she has overcome them is worth investigating, but the book simply shows the protagonist turning to superstitious prayers or being surprised.

Behind Jayalalithaa’s seemingly bulletproof persona today, though, echoes of her past vulnerability occasionally ring out. Earlier this year, when a BJP member made an obscene comment about BSP leader Mayawati, Jayalalithaa, just elected Chief Minister for a historic second consecutive term, issued a strong statement. Pointing out that she herself had been at the receiving end of such attacks, she wrote: ‘My heart goes out to Ms Mayawati’. In many ways, Jayalalithaa’s travails and connected autocratic tendencies resemble that of other successful Indian women leaders: Mamata Banerjee, Mayawati and Sonia Gandhi. The harder they have had to fight, the fewer the people they allow into their inner circle, the less we know about them today.

Amma’s strength lies in tracing the beginnings of a leader that few understand or have access to. The book is unfazed by the enigma, and sees a gutsy woman, a flawed politician, a conscious mass leader who lived through tectonic shifts in Tamil Nadu politics. Its fable-like narrative reveals the breakthroughs possible even in the ugliness of Indian politics.