The island of the day before 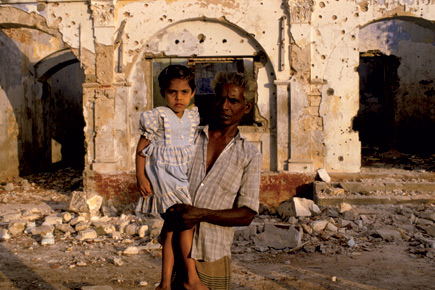 In early 2007, I flew to Jaffna on Sri Lanka’s northern peninsula to see for myself the once beautiful Tamil town ruined by war. At the time, I was the spokesperson for the United Nations in Sri Lanka and we swooped in by light plane because the town was a fortress, separated from the rest of the country by Tamil Tiger forces and the stolid opposing lines of massing Sinhalese troops which were preparing to trounce the guerrilas once and for all.

Indian troops had of course played their own special role in wrecking Jaffna during a clumsy foreign expedition as peacekeepers in Sri Lanka, 20 years earlier. Locked into the spiralling embrace that war cements, Indian, Tamil Tiger and Sinhalese forces had since rolled through the town for years like a gigantic wrestling tag team, crushing temples and pink colonial-era houses with the monstrous boots of heavy weapons and ambush. Within hours of landing, I was attending the wakes of civilians who had died by bomb and gun. Fishermen casually sniped as they fished offshore; a woman shot dead by troops who had survived the dizzying blast of a Tiger street bomb, in a frenzy of retaliatory street fire. These were the quotidian early victims of the renewed low-level counter-insurgency of the final phase of the civil war. President Mahinda Rajapaksa had pressed the green light, and his brother Gotabaya would bring the game to a close two years hence, with a cataclysmic toll on Tamil civilians.

When I left Sri Lanka after the war, I analysed the history of Sri Lanka and the military campaign that killed so many in my own book, written in under ten months. Independent journalists had been excluded entirely from the battle zone; nobody knew for sure what had happened. It was vital to unpick the military campaign and the social and historical currents that underlay the slaughter, for a largely ignorant world. It had been too easy for the Rajapaksa government to dress up their victory as an extension of the global war on terror, and to dismiss the terrible toll their forces had exacted as Tamil propaganda.

Yet, as we are witnessing once more in Ukraine and Syria, although wars are the stuff of analysis and the wash of history, comprised of the acts and omissions of giants and on-the-make gargantuans, war is nothing if not an accumulation of millions of individual decisions emanating from the anonymous masses. It is here that Subramanian’s This Divided Island is a welcome read, very different from any other book written on this terrible chapter of human struggle. Slow- cooked over a number of years, meticulously constructed and with a passion and sympathy for Sri Lanka and her people, this Tamil Indian writer illuminates the central dilemma established midway through the book, and around which all hinges: What did it take for an ordinary, peaceable Tamil to commit to violence? And how did the decisions of individuals accumulate into a movement that came arguably close to achieving the central war aim of the Tiger leader Velupillai Prabhakaran, an independent Sri Lankan Tamil state?

Here he describes a typical Jaffna street in the old town, the very same sight I witnessed during the war:

‘Their roofs had surrendered and caved in, and their walls were being patiently split asunder by the roots and trunks of trees. Out of the windows of some houses, plants and creepers burst dramatically and unexpectedly, like torrents of vegetal vomit. The oldest houses were skeletal, some of their ribs pitted with bullet holes or craters from nearby explosions, and their front yards reclaimed by Jaffna’s native shrubbery.’

Subramanian moved to Sri Lanka in order to write this post-war testament, and he captures the languid charm of Sri Lanka and the essential exuberance of her people that always seemed to me its most natural mood, largely lost amidst the racket and smoke of war. I could have extended his description of Sanjaya, a Sinhalese friend in Colombo, to a number of my own:

‘When he laughed, his eyes narrowed into letterbox slits, he quivered noiselessly, and his shoulders heaved. His mirth was tectonic.’

Although there is little that is new in the way of facts within these pages, there is loads of unforgettable nuance and fine portraiture like this. Reading this passage, I envied his ready access to the people with whom he spoke, and his attuned attention to the language and cultural peculiarities of his subjects. His sympathy for the variegated moods of his interviewees over the weeks and months he spent with them is touching, his language deft as he brings their individuality to life and gives force to the truth—and often lasting conviction— of the paths they chose. Indeed, the author’s revelations of ordinary human motive apply equally well to other simmering conflicts and boiling wars.

And so, the words of Tamils caught up peripherally or at the very heart of war provide an unimpeachable collective testimony of the facts we all know. After independence from Britain, Sri Lanka failed her Tamil citizens through State-sponsored discrimination and brutality. Eventually, political negotiation proved fruitless, and armed resistance seemed all that was left. Prabhakaran promised resistance, and offered the possibility of freedom.

Unfortunately, and as some of his former associates testify in these pages, Prabhakaran was quite possibly a psychopath, and was certainly a multiple murderer and messianic who saw the lives of his own people as calculable sacrifices in a life-and-death struggle for a political ideal. After Prabhakaran had committed one nasty double homicide (of two comrades), one associate testifies:

“Prabhakaran told Raghavan about what he had done. ‘My impression was that he felt bad about it, but he said he had no choice. Several of us found it difficult to stomach this. If you’ve been living together as comrades, this makes you very uneasy.’ Prabhakaran, he said, had developed the rudiments of a messiah complex. ‘He never apologised for anything he did, never critically analysed his own actions. Never.’ ”

The publication of This Divided Island coincides with the announcement this month of the precise format of a UN Commission of Inquiry that will closely examine allegations of mass atrocities committed by both sides during the final chapter of Sri Lanka’s war. The investigators and advisors to the new Commission would do well to read Subramanian’s work, knowing that it will give life to the tens of thousands who died, and who are now the subject of their investigation.

(Gordon Weiss is the author of The Cage: The Fight for Sri Lanka and the Last Days of the Tamil Tigers)