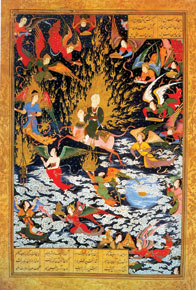 Here’s something that the Islamic and Hindu cosmologies seem to agree on: there are seven heavens. Both the Puranas and the Qur’an refer to this layered view of paradise. Perhaps this is why on the night of 14 August 1947, which also happens to be the night of Laylat-ul-Qadr, the holiest night of the year for Muslims, German Hosain of Bengal spends the night dreaming of Prophet Muhammad’s journey through the Seven Heavens. The night will bring Partition and Independence, and Murshidabad, Hosain’s chosen hometown, will move precariously between two countries. But while earthly geographies remain suspended, Hosain delights in the mystical beauty and peace of the seven heavens.

Samim Ahmed’s debut novel, which takes place in Bengal against the backdrop of the Great Bengal Famine and the Calcutta riots, progresses through seven chapters, each of which is named after one of the heavens. Like Saleem Sinai and Bishan Singh, German Hosain is part human, part metaphor. (Can a character in a novel about Partition be anything else?) Named German, in gratitude to Germany for supporting Turkey during the Arab revolt against the Ottoman Empire, Hosain is one of many brothers in a landowning family in Bengal. As wars rage around the world and paddy crops fail in Bengal, he is plagued by visions and dreams in which djinns approach him for help with housing and birds that look like maps turn into houris. And just as his wife is about to go into labour, Hosain encounters a devil, who walks towards him—but because his elbows and legs are facing the other direction, the devil is walking further and further away.

His family takes him to shrines and maulanas in search of a cure. We learn that there are three kinds of dreams: rahmani dreams that come from God, nafsani dreams that are created by the human mind, and shaitani dreams that come from the devil. ‘The sacred soul that resides in the body is sometimes split into two—it even breaks into many pieces at times. That is when dreams descend in droves.’ As the region slips further and further into suspicion and bitterness, Hosain slips more and more into his dream world.

One of the casualties of this translation is the minutiae of detail about the larger political context. I struggled to follow the thread of loyalties and conspiracies and secret meetings and betrayals and rumours that are hinted at. While the essential political question—where would Murshidabad belong—gives the narrative emotional momentum, I spent some chunks of my reading in tantalising confusion about many of the details. But, after all, a reader of translation cannot feel entitled to understand everything. Membranes shimmer between Hosain’s dreams and reality, between the translated world and the reader’s world.

Where the book succeeds enormously is its exploration of Hosain’s dream world as a substantial place of its own. The dreams are a response to the shifting political geography of his waking world. But they also carry him away into a conversation with other dreams, such as the prophetic dreams of Joseph and Sulaiman. The book’s secondary setting is that vast world inhabited by myths and amulets and spells. ‘Believe in your dreams,’ one of the chapters opens. ‘The entrance to the eternal world is concealed in them.’

The truth is, one comes to books like this with a certain amount of trepidation. Sometimes the lyricism can get tangled up with itself or the cleverness can get too gilded. A distance might then open up between the reader and the author, in this case a distance already framed by the necessity of translation. What saves the Seven Heavens is the sweetness of Hosain. His blind faith, his love for his radio without which he cannot go on his travels—these and other quirks endear him to the reader.

In one of the most memorable moments in the story, Hosain falls asleep reciting the Ayat-ul Kursi after seeing a corpse. An angel is sent to guard him till he wakes up. ‘But this young angel knew that German Mia’s wakefulness was actually another kind of sleep. Just as fate never did hold dreamless sleep for German Mia, he too never entirely left the world of sleep and descended to the real world. Would the angel then have to stay with German Mia till he sank into eternal sleep? He didn’t know. He had no task other than to follow orders. But he quite liked this tall man whom he visited frequently.’

As with the angel, so with the reader.