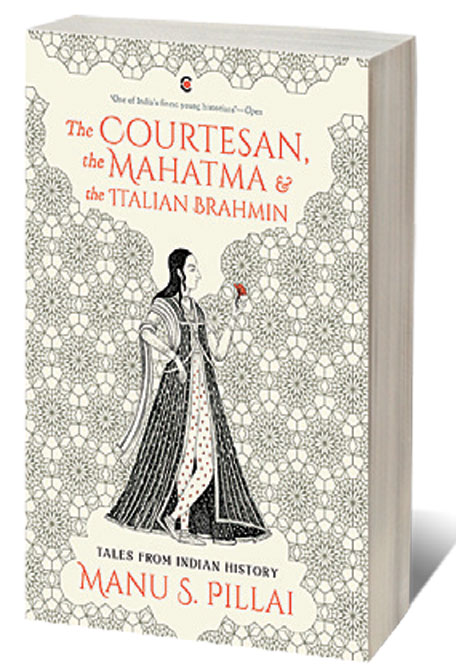 PERHAPS BECAUSE THE discipline of history has been so acutely contested in the subcontinent, for long years in post-Independence India, history remained largely the preserve of the academy. In my undergrad days at Presidency College, Kolkata, or even in the early years I spent at Jawaharlal Nehru University, Delhi, my compatriots from the history departments employed the most serious jargon, even in innocuous settings, such as eating at the mess or writing posters, peppering conversations with ‘methodology’, ‘historiography’ and ‘the subaltern’. (Mind you, they stood out even when my own cohorts, drunk on literary theory, were not exactly the poster children of lucidity in prose themselves.)

In contrast to the solidity and exclusivity of the academy stood the remnants of the proverbial Nehruvian ‘palimpsest’ of our past, the various historical sites that dot the country—archaeological spaces, easily accessible to the masses (so accessible that declarations of undying love are casually scrawled on century-old walls)—where one encounters tourist guides, full of stories that give off a scent of masala that makes one (secretly) hunger for more. These micro-narratives, full of lost details, much exaggeration and fascinating insider-stories, quite in the manner of oral history, provide the promise of an alternative model of engaging with the past.

The best thing about Manu S Pillai’s new book The Courtesan, the Mahatma and the Italian Brahmin, a collection of his columns published in newspapers and magazines, is that it is located at the intersection of these two worlds. In each of the 60-odd pieces in the book, Pillai brings the sophistication and the rigour of the academy—minus the jargon—to the ‘little’ story. Indeed, his mini-narratives have been cleverly excavated from diverse corners of the subcontinent, the clear celebration of the local heightening the pleasures of this volume. Whether it is the story of the eponymous Italian Brahmin, Roberto de Nobili, a missionary who came to south India around 1604-05 and ended up ‘converting’ into Brahminism, or the Ezhava woman Nangeli who offered her breasts on a platter to brutal tax-collectors, or Begum Samru (who might arguably be the courtesan of the title), the Delhi dancing-girl who rose to be Begum of Sardhana and was styled Umdat-al-Arakin or ‘pillar of the state’ by the Mughal Emperor, or the humble Chokhamela, the first Dalit Bhakti saint to appear in Maharashtra, whose devotional verses are still searing in import, these are all voices that need to re-assert themselves against the amnesia of time.

In 2015, Pillai published his masterly first book The Ivory Throne: Chronicles of the House of Travancore, a rigorously researched tome that told the fascinating story of the matrilineal royals of Travancore, chiefly the last—often forgotten—queen, Sethu Lakshmi Bayi. The book went on to win the Yuva Sahitya Akademi Award. Pillai followed it up quickly with Rebel Sultans: The Deccan from Khilji to Shivaji, a fascinating book that provides unique insights as it unpacks the history of the terrain through the—often dynamic and overlapping—accounts of the rise and fall of various royal lines, from the end of the 13th century to the dawn of the18th. Both books work with mammoth canvases that tell the stories of a particular region—the Deccan, of course, much larger than Travancore. The Ivory Throne follows a chronological structure; in Rebel Sultans, each chapter focuses on a particular dynasty, while following a broadly linear timeline.

The Courtesan, the Mahatma and the Italian Brahmin, Pillai’s third book, follows a completely different format. As a collection of essays, it’s temporal and geographical canvas is dizzying. Since the essays were all written to the newspaper column format—the originals were about 1,000 words each (though Pillai has enlarged a few for the purposes of the book)—the essays are bite-sized and cleanly structured, with a sharp angle, buttressed with a fair amount of research that has been woven in felicitously.


Adding to the appeal of the Volume are the accompanying charcoal drawings by award-winning illustrator Priya Kuriyan, whose dexterous strokes on textured paper lend an element of drama to the text

Adding to the appeal of the volume are the accompanying charcoal drawings by award-winning artist and illustrator Priya Kuriyan. Kuriyan’s dexterous strokes on textured paper lend an element of drama to the text, the choice of charcoal as the medium providing a starkness to the images that is leavened by Kuriyan’s exquisite detailing. Like the local storyteller-oral historian-tourist guide we mentioned earlier, Pillai first draws us into the world of his dramatis personae—whether Bob Clive of Plassey or goddess Meenakshi of Madurai, VD Savarkar or VK Krishna Menon—and once we are deep in, he reveals his scholar’s erudition, the flash of steel beneath the velvet. He reveals the twist in the tale, his scholar’s ‘against the grain’ reading, which then animates the story with new energy.

Consider Pillai’s re-telling of Tuluka Nachiyar (Tughlaq Princess) from the 14th century, my favourite essay in the book. When Muslim troops from Delhi plundered the famous Vaishnava temple at Srirangam in Tamil Nadu, they took the main idol back with them. While the local devotees plotted to bring Ranganatha Swamy back home—through an ingenious plan involving winning the Sultan’s heart via performances—in Delhi, the deity was stashed away in one of the countless storerooms in the Sultan’s palace. From there, unbeknownst to all, the idol was selected by the Sultan’s daughter as a beautiful plaything and taken to her quarters. Soon, she grew devoted to Ranganatha Swamy, decorating him with flowers, and spending all her waking hours around him. When eventually the travelling troubadours of Srirangam reached Delhi and won the Sultan’s heart through their performance, they were in fact granted their wish. Before the Sultan could change his mind, the devotees left the palace with their beloved idol. When the princess discovered the loss, she was wild with grief, and followed them to Srirangam.

While the story has a tragic ending—to know the details you must read the essay— Tuluka Nachiyar’s devotion continues to be remembered with fondness and celebrated at the Ranganatha Swamy temple today. It is believed that next to her painting on the temple wall the deity appears each year, in a lungi (which is associated with the peninsular Muslim), and accepts a quasi-north Indian meal, with chapatis.
In conclusion, Pillai notes:

‘What is fascinating… is not the legend itself but what it seeks to convey. Though it seems unlikely that a Tughlaq princess actually came to the south, head over heels in love with an idol that nightly took human form, could it have been that a Muslim woman was instrumental in having Hindu idols released from Delhi? Or is it, as Davis suggests, a ‘counter-epic’ where the roles are reversed: Instead of a Muslim king chasing after Hindu princesses, we have a Muslim princess besotted with the Hindu divine? By accepting concept of a Tulukka Nachiyar within the temple, were the leaders of the time creating a space to locate newcomer Muslims within the world of the orthodox Hindu? … a lesson we would be wise to remember in our own contentious times, when revenge is sought from people long dead and gone, and violence justified in the name of so many gods.’

The last line in fact sums up what the author has intended in this collection, to outline a reasoned and nuanced approach to the past in these times of political polarisation, when history has marched out of the academy where it resided up till my youth—the academy was attacked, of course, often, particularly over the narrative of history textbooks, but at least it was acknowledged as ‘eminent’ even by its denouncers—and has now taken over social media, where every other politically charged individual bandies about a ‘historical’ opinion.

This book is perfectly timed to start conversations across the barriers. Buy this book, read it—and gift it to someone on the other side of the ideological debate from you.