The Art of Publishing

Benedikt Taschen has redefined the business of books as an exclusive experience in sensuality and aesthetics. He and his man in India talk to Open as they discover the potential of the Indian market 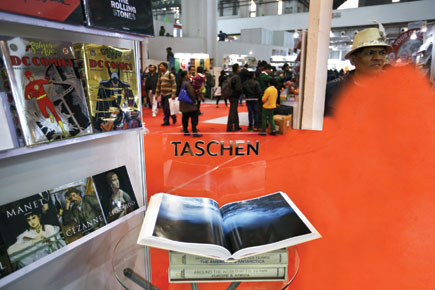 A book is a many splendid thing. It could be a distraction on a train journey; bought on the platform, read and completed on the upper berth and abandoned by the window. It could be a dear companion stored in one’s bedside table drawer and reread ever so often. Or it could be a piece of art in itself, one which makes its presence known in a room and demands that its pages be turned (never flipped) with reverence for generations to come. The books of Taschen fall into this last category. The leading publisher of art books in the world, Taschen has reconfigured how publishing works. Started in 1980 by Benedikt Taschen, it is known by aesthetes for its exquisitely produced books on everything from art and architecture to butts and breasts to design and yoga.

All companies are defined by those who started it, but at Taschen each new title bears its founder Benedikt Taschen’s stamp. Back in 2011,The Wall Street Journal called the Cologne-born pioneer a ‘seminal maverick in the world of books, but also a rebellious risk-taker.’ At a time when naysayers are so quick to espouse the death of paper and the page, he resurrected the book, not by taking it online or reducing its scope, but by making it bigger and bolder than before. Explaining the philosophy behind his books, in an email interview, Benedikt writes, ‘My business is to design books that become significant objects, that exude a profile, personality, and a soul as a beautiful painting, sculpture, or photograph might.’

On my desk sits Gauguin, brought out on Taschen’s 25th anniversary. It is one in their bestselling art collection that includes other masters such as Frida Kahlo, Edward Hopper and Salvador Dali. The reproduction of the art on the page is so fine that in La Orana Maria (Hail Mary), you can see the detailing of the wings of the angel concealed in the bushes. The viewing of art is seldom an intimate or private experience. We get to see the work of great artists in public spaces such as sanitised museums and behind frames of wood and glass. The art is never one’s to hold and behold. The Taschen art series allows you to get as close to the work as you wish. You can pick your own distance from the work and see in it what you might otherwise have missed—be it the fear on the cowering angel’s face in Gauguin’s The Messengers of Oro or the harmony between man and horse in The White Horse—were it mounted in front of you.

This accessibility to high art has been a chief driving force for Benedikt. Marc Parent, sales and marketing director for the Indian Subcontinent, says, “When we created our imprint, the idea was to give to people what they wanted, because publishers were living in their own Babel and ivory tower. Benedikt had the vision to give people what they want… When he started the basic art series, which we are now revamping, he would give books that are 200 pages for less than £10.” It is an idea that has borne fruit over the decades. Parent says, in 2013 Taschen sold 10 million books.

While the idea of Taschen—books as art—shook things up, the turning point in Taschen’s history came in 1999. Parent recalls there came a “brilliant idea” to make a book that weighed 30 kg, which sold with a bookstand made by French designer Philippe Starck and encompassed the works of Helmut Newton who changed the face of fashion photography. Copy No 1, signed by over 80 celebrities featured in it, sold at $320,000 at an auction. It opened the door to the collector’s market. He adds, “I bought this book and kept it in my house in Paris. My children grew up around this book. Today, Taschen continues to cater to readers who have the need for beautifully made books.”

This book measuring 50 x 70 cm went on to launch the Sumo series and is hailed as the ‘biggest, most expensive book production in the 20th century’. In its pages the biggest names in the world of entertainment are reduced to putty in the hands of Newton only to be transformed into something bigger than themselves. The book is Newtonesque not only because it features photos by the provocateur but because its form is equally grand and ambitious. In a 10-minute long video clip Helmut Newton’s Sumo directed by Julian Benedikt, Benedikt describes the charms of Newton, “With his eyes he is able to get what other eyes don’t see. It’s there of course but only the artist can give it life. And that is what separates him from others.” This is a singular book about a singular artist, which leaves a reader both shocked and awed.

The New York Times obituary to Newton in 2004 read, ‘His images, often in stark black and white, were calculated to shock, featuring tall, blond, sometimes naked women in heels, perhaps illuminated by headlights or trapped in a dark alley. Bondage, sadomasochism, voyeurism, murder, pornography, prostitution: each was exploited and explored in his photos over the years.’ These themes are also explored by the books of Taschen. Under their ‘sexy book’ umbrella, they sell tomes on Japanese bondage ($ 6,000), fetish girls ($1,800) and Playboy ($1,500). If pornography is traditionally seen as the literature of rolled up magazines in toilet stalls and sodden sheaves below mattresses, Taschen has seized it from the clandestine to legitimise and celebrate it. I ask Benedikt, ‘What separates pornography and art?’ He says, ‘The line between art and pornography is one that changes according to who and where you are. You cannot import a book on Renoir in Saudi Arabia, for example… For me, the most important constant is that the biggest sexual organ is the brain. Intelligent pornography, like intelligent art, gets our minds working.’ As Taschen makes a bid for the Indian market it will have to negotiate that line between art and pornography. It will choose to put its cursor not on the sexy numbers but on other titles such as Yoga, which released recently, and a book on Buddhism that releases later this year.

Talking about censorship, Parent says, “What has happened in India since the Kama Sutra? Is it the Brahmins, Victorians, Islam? India is today very puritan and intolerant and I hope it is not going to get worse. With the nudity in our catalogues we might encounter a few snares.” He elaborates that these sex books are treated exactly like the art books. They generate interest because of the sophisticated quality. And the result is that they sell. He says, “A book like Erotica Universalis [part of the Bibliotheca Universalis series], which presents sex illustrations from antiquity to today will seduce the most open-minded Indians.” To create books of this standard is a ‘long and exacting process,’ as Benedikt describes it, requiring ‘research, aggregation of images, arrangement of material, writing of texts, choice of paper stock and font.’ Taschen works in close collaboration with living artists so that the book becomes an ‘authentic record of their career’.

The Newton book personifies the spirit of Taschen—grand ambition with an avant-garde vision. There is nothing safe or timid about this book. While Taschen has 11 stores scattered across the globe in places such as Beverly Hills, Cologne and Milan, it is slowly but steadily also spreading its influence in India. At The Variety Book Depot in old Delhi, SN Prabhakar shows me the 300-odd Taschen titles that are given pride of place in its warehouse. The books —which range from $10 to $499—sell well, he says, in the metros and even in “Jodhpur, Jaipur, Ahmedabad, not Amritsar”. The art series tends to be the hot seller and the three-volume National Geographic; Around the World in 125 Years ($499) has been recently bought by the likes of fashion designer Ritu Kumar.

It is little surprise that Taschen chose Variety Book Depot as its partner since it is one of the oldest wholesalers and distributors of books in Delhi. Helmed by Om Arora, the family owns more than 50 bookstores across the country and provides the necessary reach to Taschen. At The World Book Fair, held last month in Delhi, Taschen had a stall for the second year running. Here its flagship titles on yoga, wood, architecture, Stanley Kubrick and Charlie Chaplin were on full display in the hustle and bustle of Pragati Maidan. Parent who was at the stall last year as well, says, “The Book Fair helps achieve visibility. There is a sense of discovery for many Indians who ask where they can see more titles.”

The three-volume National Geographic tome was the centre of attraction at the entrance of the stall. Numerous passers- by would stop to slowly turn the pages, pausing at each mountain top and desertscape to exclaim, “amazing, just amazing”. Watching readers browse titles and gasp at pages, Parent says, “India is going to fall in love with Taschen. Taschen is ripe for India, and India is ripe for Taschen.”