George Saunders, who suspects he won the MacArthur genius grant through an error, on his ability to write anywhere and the importance of doing the dishes 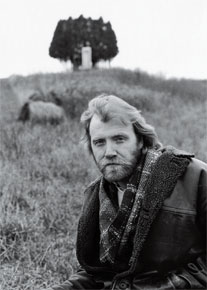 George Saunders, who suspects he won the MacArthur genius grant through an error, on his ability to write anywhere and the importance of doing the dishes

George Saunders was a guitarist before he took up geophysical engineering, and a student at Syracuse University before he began teaching there. Now considered among the sharpest, funniest writers of short fiction, his recent collection of stories, Tenth of December, made it to almost all of last year’s ‘top ten’ lists. Hailed in The New York Times as ‘the best book you’ll read this year’, this collection, written over a span of seven years, is surrealist and satirical.

But it can also be affecting. In Semplica Girl Diaries, a daughter has committed a grave crime and her father is afraid that the detective lurking in their lawn late at night, humming, will wake up his children. He walks into their room worried and, watching his daughter sleep, observes: ‘Eva, source of all mayhem, sleeping like baby.’ This is a slice of what a Saunders story can do. With his ability to get inside a character’s head, he can experience and explain his protagonists’ dilemmas and anxieties until you, too, are weighed down by their aches.

Q Tenth of December is more emotionally accessible than your earlier works. You have mentioned elsewhere that it was an attempt at being more expansive, attracting more readers. Did you take any conscious steps to extend its reach?

A I really didn’t take any conscious steps—the book was written over about a seven-year period, so [it] was rather like a slow-moving and very big ocean liner. It moved of its own accord. Or, I should say, as I gradually changed as a person—our kids grew older and went to college and so on—the stories started to subtly reflect a new perspective: a little more patient, a little more inclined to ask, ‘How is it that things sometimes go right in this crazy world full of suffering?’ It’s still, I think, a pretty dark book—but maybe with little cracks in it, through which some light is shining. I hope so anyway.

Q You seem to have a fascination for death. Do you often attend funerals or visit cemeteries?

A No, not at all. If I had my way, I would never attend another funeral in my life, because no one would die. I’m interested in death in the sense that, since it’s going to happen to me, I would like to be as ready as I can to meet it in a good way. As Woody Allen once said, “I’m not afraid of death, I just don’t want to be there when it happens.”

Q The Semplica Girl Diaries originated in a dream you had in which you saw women from the ‘third world’ hanging in your lawn, strung together with a piece of thread that passed through their heads. Do you often have wild dreams that you turn into stories? Is that why your stories are so surreal?

A I often have wild-ish dreams but usually, when I wake up, they are just seen to be nonsense. Every so often—maybe three times in my writing life—I’ve had dreams that seemed a little more deeply wired. I love it when that happens, and wish it happened more often.

Q In 2006, you were honoured with a ‘genius grant’ by the MacArthur Foundation. What sort of research goes into your writing?

A I don’t know how I got that—I suspect a clerical error. And no, I almost never do research. I have a new project I’m working on that has taken a little bit of historical reading to get started—but generally, no.

Q Do you carry a journal when you are out?

A No. My approach is to just live with my eyes open, and assume that when I need a certain something in a story—an image or anecdote or visual detail—it will come down naturally from my mind, and will, in this way, be more organically appropriate for that exact moment in the story.

Q You recently adopted Nyingma Buddhism. Does this belief help you write?

A I think the main thing that helps with writing is just getting in there and trying it. I really love writing so I don’t find it hard—I mean, I find it hard to do well, but I am always pretty eager to go in and get started in the morning.

Q Where do you write? What does your writing space look like?

A I have a little writing shed near our house—with no internet. But I can write pretty much anywhere. I trained myself in this by writing my first book while at my engineering job.

Q Do you write with pen and paper? Or do you use a laptop? How many drafts do you do for a story?

A I write on the computer and then, to edit, I print [it] out on paper and use a red pen.

Q After long hours of typing at a stretch, what is your idea of an ideal break?

A I’ll just go in and play the guitar for a while. I’ve been doing that since I was a kid and really love it. I think it works a different part of the brain. Also, doing the dishes is good.

Q Do you write songs as well?

A I just started writing songs again after about a 15-year break. The strange thing is, I have no trouble writing the music, but the lyrics are hard for me. But it is, as best, a much-beloved hobby.

Q Do you prefer short stories over novels? As a writer, which is more satisfying?

A I’ve never written a novel. I think a writer has to do whatever he can do well. I don’t seem to have much of a gift for prolonging or explaining or complicating. My main impulse is to condense. So I think we seek out the artistic form that suits us, and that we can somehow inject with sufficient energy to make it interesting to our audience.

That said, I would like to write a novel—but only if I could write one that was somewhat original and not boring. I would not like to write one just for the sake of writing one, in other words.

Q You have been hailed by The New York Times in its elegy to Tenth of December as a ‘writers’ writer’. Who are the writers you admire?

Q You attended and now teach at the same university where Raymond Carver once taught. Did he influence your writing?

A Very much so. When I was young and first starting to write, he was the writer of the moment. I loved his understated prose, and especially the fact that he was writing about working-class people.

I felt the influence of Hemingway on him, and was very drawn to that too. When I came to Syracuse as a student, he had just stopped teaching—but I did see him a party once: a tall and quiet man of great dignity.

Q You have been teaching creative writing at Syracuse for almost two decades. Do you believe that writing can be taught?

A This year, we got 600 applications for six places in our programme. So the people who get in are already wonderful writers—we don’t need to teach them to write. What we try to do, though, is get them to start writing in a way that only they can write—that is, to occupy what we might call their ‘iconic space’. That is deep work; that is done with close-reading and editing of their (already excellent) stories.

Q What is the one piece of advice you repeatedly give your students?

A Learn to revise. The first draft is only the beginning.