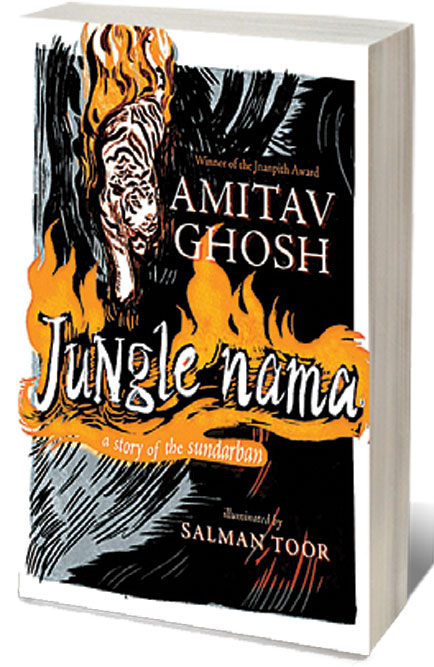 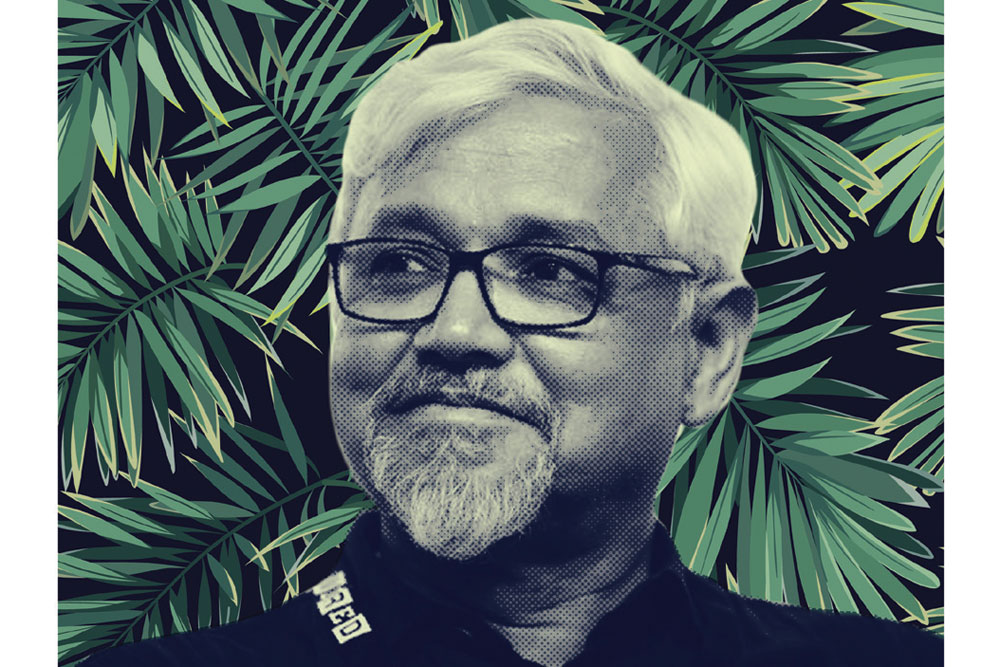 
‘WRITING JUNGLE NAMA was one of the greatest adventures of my life… my first foray into verse,’ writes Amitav Ghosh, a leading contemporary Indian author. He is well known for his scholarly and gripping fiction and stylishly searing non-fiction. He has written in almost every possible genre: creative fiction and non-fiction, longform essays and reportage, translation, and even an attempted screenplay adaptation of one of his own novels. Now he challenges himself with poetry, the most difficult of all genres. Jungle Nama: A Story of the Sundarban is a verse adaption of a folk-tale from the Sundarbans, a retelling of the Bon Bibi legend that lies at the heart of his 2004 novel, The Hungry Tide.

The Sundarbans, the riverine waterways and sea routes, the geographical terrain of South and East Asia have been the setting for many of his books: from his debut novel The Shadow Lines (1988) to The Calcutta Chromosome (1995) to the Ibis trilogy. One of his most important books, The Great Derangement (2016), deals with the urgent issue of climate change. The overlapping themes of migration, trade, politics, society and more span much of his work.

Jungle Nama, which at its heart also deals vitally with the ongoing catastrophe of climate change, highlights human greed and the ironic penchant for profit over the planet’s preservation and its safe future. Ghosh writes, ‘The planetary crisis has upturned a vast range of accustomed beliefs and expectations, among them many that pertain to literature and literary forms.’

So unsurprisingly, Ghosh takes on the challenge of the art of poetry—and that too the complexity of metred verse. Jungle Nama is a free adaptation of a 19th-century legend, told entirely in dwipodi-poyar—the ‘two-footed line’—of twenty-four syllable couplets that replicate the cadence and texture of the original Bangla.

The narrative romps and skips along at a galloping pace precisely because of the structural and literary device it chooses to employ—that of a chantlike oratorical dwipodi-poyar. Appropriately, there is a lovely doff to the inherent art of speech and metre in the middle of the book:

Your first step is to find a proper way to
speak,
it’s time for you to learn some better
technique.
Count your syllables, it’ll help to rein your
appetites in.
the yoke of meter will give you discipline.

Over 82 pages, incorporating Hindu, Islamic and folk legends, it is a secular story of ‘the avaricious rich merchant Dhona, the poor lad Dukhey, and his mother; it is also the story of Dokkhin Rai, a mighty spirit who appears to humans as a tiger, of Bon Bibi, the benign goddess of the forest, and her warrior brother Shah Jongoli’.

Those who understand the Bengali language get an extra thrill, when they recognise the linguistic puns on the character names. ‘Dhona’ (the rich merchant) comes from ‘dhon’ or wealth. Bon Bibi translates into the ‘jungle woman’; and in the poor lad Dukhey’s name ‘dukho’ means sadness (implying sadness arising out of poverty).

Jungle Nama is accompanied by stunning artwork by the renowned artist Salman Toor. This book, as Ghosh rightly insists, is ‘illuminated’ and not ‘illustrated’—the latter often ends up being ‘subordinated to words’. The volume has the feel of ‘beautiful pre-modern books, such as the magnificent miniature-studded manuscripts of the Indian subcontinent and Iran’. In addition to the stylistic textual ebullience and formal metre that drives this wonderful folktale, the noirish black-and-white art and its production values make it a must for every booklover.

Rather aptly, Jungle Nama concludes with a sagelike warning: ‘A world of endless appetite is a world possessed. / what your munshi’s learned by way of his quest.’ Read this book for its immediate pleasure of verse and art, but more importantly for the larger message it contains.