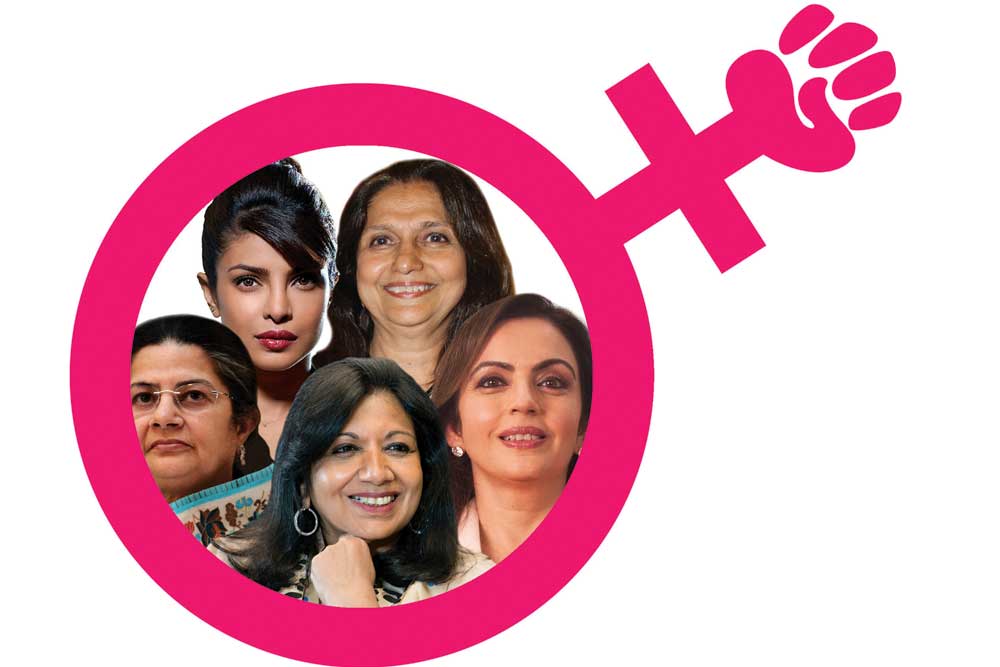 IN LITERATURE AS in life, timing is everything. Being pipped at the publisher’s by a celebrity writer whose book is based on the same concept as one’s own, must be devastating. Luckily, it doesn’t happen often. Last year, feted Indian banker Naina Lal Kidwai who heads HSBC India, wrote a much-reviewed book 30 Women in Power, an anthology of fellow mavericks who had cracked the glass ceiling. Now comes Gunjan Jain’s 500-page tome on 24 successful Indian women, She Walks, She Leads.

One year on, we come across the same cast of characters—more or less—telling us the same success stories —more or less, and then some. Jain’s approach is that of an authorised biographer—husbands, mentors and kids are roped to fill in the flattering profiles. What we have are paragons, but very few pioneers. Also, by the time these women reach celebrity status, they’ve already rehearsed their life stories so well in women’s magazines and online portals, there’s little new to add. Jain’s idea that she would distill the qualities that make these women leaders gets a set back from the very first chapter dedicated to India’s top tier of corporate wives. Would Nita Ambani be an inspiring leader without her silver spoon? Or Rajashree Birla? Yasmeen Premji? Parmeshwar Godrej? Shobhana Bhartia? True, they are all accomplished women and most are role models for CSR-inspired philanthropy but hey, they are all to the manor born. They grew up privileged and they’ve been hogging the achiever’s limelight for decades.

India has changed and its icons have changed. Today’s Millennials find role models outside the confines of fortuitous corporate marriages. The women they admire are missing from this book—like India’s formidable tech CEOs: Kirthiga Reddy who was Facebook’s first employee and now heads the company in one its largest global markets; Neelam Dhawan Managing Director of Hewlett Packard India; Vanitha Narayanan Managing Director IBM India, Aruna Jayanthi, the Chief Executive Officer of Capgemini India… this book has completely missed the vast changes a younger generation of self-made Indian women tech entrepreneurs are ushering in.

Anthologies are often criticised for what they include—and leave out. One woman’s role model may not be another woman’s idol. This book would have been better served by focusing on a fresh pick of women achievers and the inclusion of some categories that are too important to omit: women writers, painters, cosmetics tycoons, art impresarios, architects, restaurateurs, dot com doyens, film directors, organic products manufacturers, heads of cooperatives… all missing. What a wasted opportunity to introduce us to a new cast of women achievers who are changing India in a myriad ways every day.

‘My mother was my first role model— a strong and confident woman in a patriarchal set up,’ says Jain. ‘From her I learnt that achievement does not arrive of its own accord and sit lightly on the shoulders’. It would have been enlightening to learn more of the downside of success for women—the guilt, the disappointments and working harder than male colleagues. Instead of glowing reviews from supportive families, it would have been honest to address the fact that no high -level woman achiever can do justice to motherhood and a 24×7 job. Indra Nooyi admitted it, and others have too… but we continue to nurture the myth of the super woman setting impossible standards for a younger generation who have cottoned on to the fable and are remaining childless in increasing numbers.

There is a bigger tragedy hiding behind the glamorous figures in this book which might have deserved a mention: the percentage of women in the Indian workforce is among the lowest in the world. And it’s not because of lack of talent but ingrained patriarchy. The Sixth Economic Census reveals women run only eight per cent of businesses in New Delhi while an earlier McKinsey study found Indian women contributed just 17 per cent of national GDP—less than half the global average of 37 per cent. By contrast, Chinese women contribute 41 per cent of GDP, those in Sub-Saharan Africa 39 per cent and women in Latin America, 33per cent. Even women in Bangladesh do better than us.

India’s untapped female work force— the majority work in the informal sector—could provide a huge boost to its economy and it is clear little is being done to harness this potential. At the top end of the corporate ladder, many of the women in this book have been listed as board members following a new ruling introduced by the Government in 2014, making it mandatory to have at least one female board member on every publicly listed company. Not surprisingly, the board slots have been filled by wives, daughters and mothers. But it’s a start.

Jain’s mantra for success reads like a battle plan manifesto: ‘swim against the tide; get out of your comfort zone; never be complacent, stay positive…’ and it is an indication of how inherently hostile the Indian workplace remains towards its women. And yet….

Although l Sudha Murthy was the seed investor who paid for all family expenses for three years while Infosys was getting off the ground, Narayan Murthy refused to have her join the board saying the two couldn’t work together. The episode rankled Sudha for years.

– Rajshree Birla has done enormous work to contain polio in India working with the government to create a rural cold chain and immunising 18 million children over the years. She heads a team of 200 CSR professionals and 1,500 field workers who constitute the framework of one of the largest CSR efforts in the country.

– Yasmeen Premji worked for years at Inside Outside design and interiors magazine and designed the Premji Investment office and the Azim Premji Foundation. Built with terra cotta and natural stones, the buildings maximise use of natural light and ventilation so there is only one air-conditioned conference room.

– Indra Nooyi confesses that PepsiCo’s place on her priority list is above her husband, Raj. She once recounted how Raj said to her— “Your list is PepsiCo, PepsiCo, PepsiCo, our two kids, your mom and at the bottom of the list me.” Indra retorted in jest, “You should be happy you’re on the list!”

– Kiran Mazumdar Shaw started Biocon in the garage of her rented house in Bangalore with a seed capital of Rs 10,000. It was the result of being unable to follow her passion to be a master brewer though she was the only woman qualified to do the job in India at the time.

– Zia Mody’s father, Soli Sorabjee, was disappointed when she gave up practicing at the bar to set up her own chambers as a corporate attorney. “I’d have preferred her to be at the Bar…it’s ok, your clients know you but when you are in court, people know you, your fellow advocates, judges and others…that’s how one gets recognition,” he says.

– Swati Piramal’s passion is collecting master-class recipes from unlikely sources. She is the author of cookbooks including one on Zen cooking and trawls Chor Bazaar, Delhi’s Jama Masjid and ancient markets in Egypt and Marrakesh for old books. Among her prized possessions is a recipe book handwritten by John Malcolm, a 19th century Governor of Bombay.

– Priyanka Chopra was dumfounded when she got a call from Femina Miss India inviting her to take part in the contest. Her mother and brother had submitted her pictures unbeknownst to her. The rest, as they say, is history.

– Shabana Azmi once cancelled a trip to Cannes where her film Genesis was to be screened to sit on an indefinite hunger strike with three slum dwellers whose shanty was being demolished in South Mumbai. She succeeded in her fight and got the Government to support the building of tenements for 50,000 slum dwellers.