A book that examines the centrality of water in our culture, religion and region’s geopolitics. 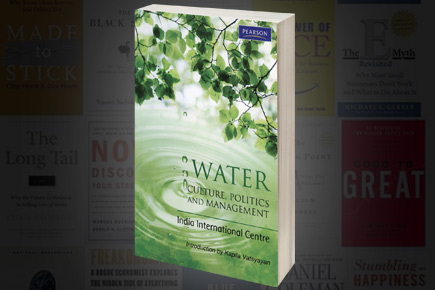 A book that examines the centrality of water in our culture, religion and region’s geopolitics.


This is an imperative book that looks holistically at water in India’s culture and as a resource. It opens with a brilliant chapter by Kapila Vatsyayan on the role of water in the Hindu tradition. Marshalling impressive details from Indian scriptures, the author shows how, in scripture and in myth, in sculpture and in art, the river systems and water bodies, and Varuna, an all-powerful god, are shown to be critical to the survival of mankind right from the time of the Rig Veda.

There is a detailed chapter by Claude Arpi on the geopolitical significance of Himalayan rivers. It points out that from the early 1960s, the Chinese understood the importance of harnessing rivers such as the Brahmaputra, diverting their waters from China’s plentiful south to the parched north. After the success of the Three Gorges Dam, the Chinese are now looking at other monumental projects that potentially include changing the courses of the Brahmaputra and the Yellow river. Arpi examines its implications on those, such as India, downstream from Tibet. While India and China signed a memorandum in 2006 to be transparent about water usage, this has not reassured Indians of Chinese intentions on Tibetan river resources.

The Narmada river controversy is chronicled as well. The outlines of that old debate, development versus dislocation, are restated as bureaucratic greed overtakes sane development goals. One rather odd and poorly written chapter is on water as a metaphor in Indian cinema by Partha Chatterjee. It signifies how much mediocrity goes in the name of film sociology in India. Finally, there is an absorbing chapter on pre-Portuguese maritime crafts in India. A flourishing though limited ship-building industry, the likely routes that traders navigated, and 14th century knowledge of hydrography, are outlined here.

This is a book for all interested in the role of water in Hindu mythology, the scope of water disputes as central to future diplomacy, and its centrality in the geopolitics of the region.