Return of the Rebels

An incendiary Urdu classic, banned in 1932, makes its way back to us in English 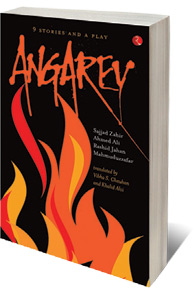 An incendiary Urdu classic, banned in 1932, makes its way back to us in English

Angarey, a collection of nine short stories and a one-act play, was published in Urdu in December 1932 by Nizami Press, Lucknow. Four months later, copies were set on fire. The authorities had ruled that the content attracted a provision of Section 295A of the Indian Penal Code; that there had been deliberate and malicious intent to outrage the religious feelings of a class of His Majesty’s subjects. As far as we know, only five copies survived the conflagration. But no amount of burning could prevent Angarey from being recognised as a milestone in Indian literature.

Faced with a flood of anti-colonial, nationalist literature in the first half of the 20th century, the British responded with controls and coercion. In 1908, the great Premchand himself narrowly escaped sedition charges for his book Soz-e-Vatan. The young authors Sajjad Zahir, Dr Rashid Jahan, Ahmed Ali and Mahmud-uz-Zafar had not called their book ‘angarey’, meaning red hot coals, for nothing. They wanted to shake up society, and in particular Muslim society, to make it face up to the oppression and injustices it condoned. Idealistic and highly educated—Sajjad Zahir and Mahmud-uz-Zafar studied at Oxford, Ahmed Ali lectured in English and History, and Rashid Jahan was a qualified doctor—the authors were familiar with modern Western literature and heavily influenced by Marxism. They published this work in Urdu because it represented the ‘Ganga-Jamuni’ culture of India and because Urdu had a far greater reach than English.

Even the words they used shocked many. They jettisoned the ornate formality of Urdu prose in favour of a language that was direct, colloquial, idiomatic, unadorned and often stark. They adopted a bold, new style that is now known as ‘stream of consciousness’. They spoke of matters that were generally pushed out of sight. Lust and sexuality were written of frankly. For example, in the one-act play ‘Behind the Veil’ that concludes the collection, Jahan drew on her experience as a doctor to portray the physical and mental anguish of women in an oppressive patriarchal society. One character’s husband longs for another wife, and visits sex workers. Another woman is forced to undergo operations because, in her words, ‘My uterus and lower parts had begun to slip down. I needed to be corrected so that my Miyan could get the pleasure of a new wife from my body.’

The poor and the underprivileged are championed in this collection, and portrayed with devastating realism. Zahir, in the beautiful story ‘Dulari’, deals with the exploitation of a girl from the ‘lowest level’ of society and the selfishness and smug superiority of the elite. Superstition and religious hypocrisy are also mercilessly ridiculed through the book. Didactic literature in Urdu, condemning such things as multiple marriages, was not new. In poetry, the mullah, that religious moralist, has been made fun of for centuries. But Angarey went several steps further.

As Ahmed Ali later wrote, ‘People read the book behind closed doors and in bathrooms with relish but denounced us in the open. We were lampooned and satirised, condemned editorially and in pamphlets. Our lives were threatened; people even lay in wait with daggers to kill us.’

However, it’s also true that many leading literary and academic figures supported Angarey, including the eminent historian Mohammad Mujeeb. The authors themselves stood their ground. Again, it was Ali who wrote the riposte to the ban published in The Leader, Allahabad, on 5 April 1933: ‘The authors of this book do not wish to make any apology for it. They leave it to float or sink of itself… They stand for the right of free criticism and free expression in all matters of highest importance to the human race in general and the Indian people in particular. They have chosen the particular field of Islam not because they bear it any “special” malice but because, being born into that particular society, they felt themselves better qualified to speak for that alone.’

This article went on to call for the establishment of a movement of Progressive Writers, dedicated to a genre of writing that highlights the need for social and political reform. The movement changed the way literature was written in India; in her valuable preface to this translation, Nadira Babbar, playwright and daughter of Sajjad Zahir, tells us just how much.

The stories themselves are still stunning, fresh, engrossing and relevant. In places it seems the translation could be improved, but it would be wrong to quibble when the translators have laboured so long, and with such dedication, to bring Angarey to the English-reading world.


Angarey: 9 Stories and a playVibha S Chauhan and Khalid Alvi