The fate of West Bengal is linked in many ways to how the CPM deals with the confusion that has gripped it over the years. 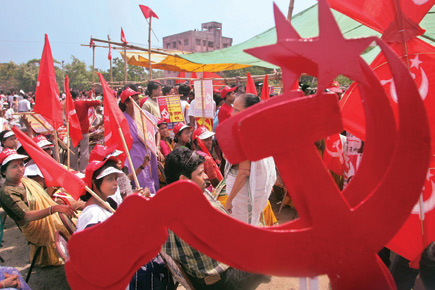 The fate of West Bengal is linked in many ways to how the CPM deals with the confusion that has gripped it over the years.


Few police firings in Independent India produced impacts more durable and widespread than the one at Nandigram. The nerve points that the incident of 14 March 2007 touched off could not restrict themselves to merely clouding West Bengal, its government and the ruling party. The impact has gone much beyond—it has put a question mark on the original promises that Marxists made in the state and on the future of these promises throughout the country.

At a time when the Marxists of West Bengal are accused of having forgotten history, Monobina Gupta—a senior journalist who spent a good part of her life as an activist associated with the CPM’s student and women wings—turns to history in an interesting way. Often through case studies, she tries to make sense of things and find out why Nandigram has got so powerfully embedded in the minds and lives of countless citizens who are now poised to travel along an uncharted road.

The great virtue of her book  is that she participated in the process she has written about. She saw, as an insider, the unfolding of Marxist promises and their acceptance by workers, peasants, the intelligentsia and many other sections of society.

And then, as an objective observer from outside, she saw the same promises being cast aside—in Singur, in Nandigram, in Lalgarh, on Kolkata’s streets, in the Coffee House on College Street, in the popular imagination of those who manned the great feat that the CPM achieved in West Bengal. The book romps through the history of the Communist movement in the state and analyses the factors that have gone into the making , and now unmaking, of the CPM in West Bengal. Monobina’s informal style helps enhance the pace as the book passes through contradictions in the history of the party.

The author is no less gripping when she writes about the CPM’s great dilemma in 1996—the only time the party could have captured the prime ministership—when its Young Turks, led by Prakash Karat, forced the party to commit a ‘historic blunder’. That, however, does not end the debate. The party’s decision in 1996 has thrown up several questions:

Would the United Front (UF) Government have floundered the way it did under HD Deve Gowda if it had been led by an able and astute leader like Jyoti Basu? Wasn’t the floundering of the UF Government one of the main reasons for voters to seek stability in the BJP, especially as the Congress was in coma? Wasn’t it then also an opportunity for the CPM to find an answer to the most vital political question that has been haunting the Left since the beginning—how to deal with the Congress and force it to vacate the space that could be occupied by Communists in national politics.

For, it was this political question that formed the basis for the birth of the CPM from its parent CPI in 1964. Again, it is because of this that the CPM kept missing political opportunities with sickening regularity. And now, it is the same question that has almost divided the party between Bengal and its central leadership.

In many ways, this book is about parallel, though not unrelated, tales. If West Bengal is at the crossroads, then so are India’s Marxists.