For Ruskin Bond and Ganesh Saili, authors of the The Landour Cookbook, good food is comfort food 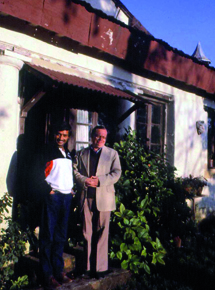 For Ruskin Bond and Ganesh Saili, authors of the The Landour Cookbook, good food is comfort food


Busybodies, both of them. At his home in Mussoorie, Ganesh Saili is reading a newspaper while trying to tend to his three-year-old granddaughter, who seems to be coming down with a cold. Before that, he was researching and reading up on important landmarks of the hill town.

Ruskin Bond has even less time as he puts papers together to file his tax returns. That the landline phone isn’t working, and workers are cleaning up the mud and muck near his stairs, making his front door almost inaccessible, suits him just fine. “Just as well,” he grins, “No tourists trying to call or come visiting for photographs and autographs!”

But both are ready to put everything aside to talk about food. Together, they have edited the The Landour Cookbook: Over Hundred Years of Hillside Cooking and Bond has written an apt introduction for it, spiced with humour and full of the wistful fragrance of days gone by. Published by Roli Books, the second edition of the book is out in the market and is selling—for lack of a better cliché—like hot cakes.

It was Saili who, in the 1990s, came across a spiral-bound copy of recipes that had been painstakingly collected and locally printed by the wives of missionaries in Mussoorie between 1850 and 1950. “These were mostly American women who followed their missionary husbands from all parts of India—Agra, Kanpur, Delhi, Balia, parts of Madhya Pradesh—in the summers. It was too hot to do the Lord’s work when it was so hot in the plains,” he explains.

Hill stations remain the best escape from scorching summers in the plains. Today, you can see men-folk in their three-quarter pants, panting up the Mall Road, hoping that one day the roads there will be less steep and have four lanes in which to whizz around in their sedans. Teenagers in their Greater Kailash-best, too, prefer to strut around Mall Road, since Landour, slightly further away, has nothing to see, really. “Just trees all around, no use.” Women are courageous enough to walk uphill in their skinny jeans and muffin-top-displaying lycra tops. Aunties in crepe de chine salwar-suits, teamed with pointed heels, dig their fingers into their husbands’ shoulders as they come downhill, ready to slip or twist their ankles any minute.

A little over a century ago, it would have been the families of missionaries, being carried in dandees (baskets balanced on sturdy sticks that were carried by ‘natives’) or sitting sidesaddle on horses, several of them accompanied by their servants, pets, grand pianos and crates of wine, all carried on mules.

“There were huge bungalows for missionaries in Landour—the Mennonites, Protestants, Pentecostals, Methodists and others,” says Saili. Their wives would set up home in these bungalows for four to six months in the summer and form a local club. In their free time, they swapped and shared recipes for everything from the well-known soufflés and fondues to the lesser-known Hungarian goulashes and Kentucky chocolate crullers. The Landour Cookbook has all these and more, with exhaustive sections on breads and rolls, jams and jellies, pickles and relishes and, of course, confectionery.

“In a way, it is more a social history than a cookbook,” says Bond, emphasising the way each recipe includes the name of its contributor. Original measurements are mentioned in the same units used decades ago—seers, mounds and chattacks. “Of course, we have stated modern measurements [as well].”

Although Bond is fond of the little recipe book, it’s simple ‘Hindustani’ food that he loves. “I like dal, sabzi, roti and meat. I love fish. We have the machchliwala come and deliver freshwater fish such as the rohu (carp) and singara (cat fish) every once in a while,” he says. Living with his adopted family, Bond rarely enters the kitchen and leaves the cooking to his granddaughter-in-law, Beena. “She cooks really nice food, though she is more of a chili person. But I don’t mind spicy, since I have inherited my mother’s likes and dislikes for food.”

For Saili, cooking is a stress buster. “I love cooking biryani and all that my mother used to make,” he says, talking about simple and delicious dishes such as bhangjeera (perilla) chutney, kaafli (pahari spinach cooked in local spices) and thichwani (a mild curry of smashed radishes or baby potatoes cooked on a slow fire).

While Saili remembers his mother’s cooking, Bond shudders at the thought of a rhubarb sweet dish served every day while he was at Bishop Cotton School in Shimla. “I hated that thing,” he says. His first food memories are far more delectable. Bond was about seven years old when he was in the princely state of Jamnagar, now in Gujarat, with his parents. “Our khansama there cooked delicious food such as fish and lamb cutlets, stir-fried vegetables and curries. He made the best mutton koftas,” remembers Bond.

Called Jaan Sa’ab, the Maharaja of Jamnagar would often organise banquets and parties and the Bond family would be invited to those as well. There would be platters full of gulab jamuns and laddoos and all things sweet. “I think I had my fill of sweets then, since I like savoury things more now,” he says. “But then I have always been fond of eating,” says Bond. In 1951 in Dehradun, he took part in a tikki-eating contest. Made of mashed potatoes and dal, these tikkis are crisp brown on the outside and famous for their fiery green and sweet red chutneys. “Just out of school and I ate 32 tikkis!” he chortles. The prize: someone else had to pay for the spicy treat.

While spicy chaat may not be up Bond’s culinary alley anymore, he still likes pakoras and the occasional parantha for breakfast. Of course, local delicacies from Uttarakhand such as patyud (a dish made of colocasia leaves) remain a favourite. “In fact, one of the best meals I had was many, many years ago in a village near Landsdowne. A friend’s mother quickly rustled up some green vegetables—made of all edible greens such as spinach, onion leaves and radish leaves—and rotis,” he reminisces.

For Saili, it was the pahari gath (a lentil that grows in the hills) ki daal and rice with homemade white butter that makes for the best meal he ever ate. “My friend Professor Misra happened to be near Badrinath. My mother’s village, Kuhed was nearby and I went to my maternal uncle’s house, which is where I had that heavenly meal. It’s easy to say, ‘How I loved the lobsters at The Taj Mahal Hotel’, but that food doesn’t hit the primary taste buds of mine,” he says frankly.

Saili does like to rustle up a fancy meal every once in a while and has learnt the tricks of the trade from one of the old khansamas in Mussoorie. “The poor man died last year. He was an alcoholic, though it is old age that killed him.”

Of course, there is an old local shop in Landour that serves a lot of preserves and chutneys made from recipes in the cookbook. And while Saili claims to have tried several cakes and chutneys from the book, Bond is more cautious. “I have tried one of them—a pie. I don’t remember which. All I remember is I had a stomach ache after eating it,” he chuckles, “So I won’t guarantee the recipes. You should try them at your own risk.” Another Ruskin Bond book, then, laced with irony, wit and suspense.