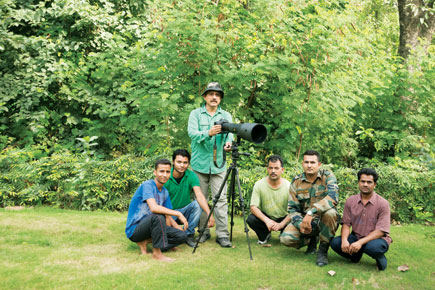 For each of the species recorded, the book provides the location, date and time of sightings. It also carries forward an earlier study (2002–03) on 91 species of birds at the Rashtrapati Bhavan, carried out by the Bombay Natural History Society.

This showcase of the feathered denizens of the president’s official home, among which are many migratory species, idenitifies birds spotted on the expansive lawns of the Mughal Garden, Herbal Garden, Cactus Garden, nursery and duck pond.

Dr Mathew says the idea for the book came from the President, who is a nature lover and took over a year to complete it. A keen photographer in his free time, he says he was assisted by the many gardeners on the presidential estate. He asked them to bird-watch for him, and they colluded on the project.

Among some of the specimens that have been spotted on these premises are the black-rumped flameback, the Oriental white-eye, some exotic ducks and the purple sunbird. While a number of species spotted are resident breeders, many documented in the book are species that have travelled from as far as Europe, Central Asia and Siberia; like the elusive Asian paradise flycatcher, which usually spends its winters in tropical Asia.

The photographs are gorgeously rendered! The book is a must-have for any bird lover.