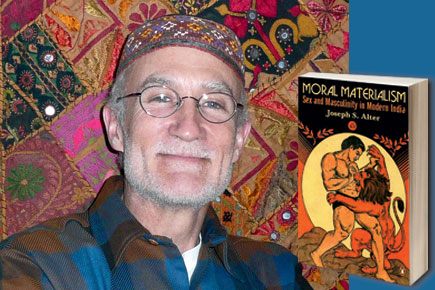 
In a 21st century world, the notion of a male withholding his semen seems laughable. Everything from Cadbury chocolate ads to the dark corners of the internet seem to be beckoning men to indulge their desires for physical pleasure without reservation. And you don’t need the alleged 630 per cent domestic traffic increase on Sunny Leone’s porn website during her run on Bigg Boss 5 to see that India is an equal partner in the madness: contemporary TV and Bollywood tell the tale of a country always on the verge of breaking a new taboo. Maybe, that’s what makes Joseph S Alter’s book, Moral Materialism, so fascinating.

Alter is a sociocultural anthropologist at University of Pittsburgh who specialises in South Asian studies. Moral Materialism, released in India some weeks ago, dissects the complex subject of masculinity in modern India through examples of Indian wrestling, yoga, politics, and, most compellingly, deeply-held beliefs about male chastity. Some of the ideas about the latter seem so at odds with modern life that it begs the question: can a man really retain his semen? And if so, will he go mad? In a conversation about Moral Materialism, Alter addresses whether male chastity can actually do more harm than good.

Q What drew you to subjects such as abstinence and Indian wrestling?

A I became fascinated with how a sports training regimen became the basis for a way of life. I was interested in the power of abstinence, because it is so fundamental to athleticism, and shows how the idea of physical power is linked to sex, but in a way that turns the physical nature of sexuality on its head.

Q The basis of Moral Materialism is a lot to get one’s head around. Can you give us a basic introduction to the themes?

A The book is about looking at the relationship between sex and masculinity in a different way.  We tend to think of sex in terms of pleasure and procreation. In essence, [I] make a case for understanding masculinity in relation to semen as a material substance shaped by culture.

A Topically, the book focuses on athleticism, celibacy, yoga, and permutations of Ayurvedic medicine. Pehalwans (wrestlers) engage in regimens of training by means of which the production and disciplined retention of semen produces and reproduces embodied strength and strong moral character.

Q What is the symbolic tradition of celibacy and the Indian male?

A The importance of celibacy is reflected in many dimensions of Indian history and contemporary practice. Celibacy is symbolic of world renunciation, self-discipline and self control. It signifies both detachment from desire and power that comes from the practice of austerity.  With regard to masculinity, celibacy produces something of a paradox, since asexuality can be interpreted as effete or unmanly.

Q You have a chapter in your book related to celibacy and Indian wrestling. What’s the history there?

A Wrestling in India is sport, but it is also an elaborate way of life that revolves around exercise and self-discipline in the akhara (gymnasium). Wrestlers engage in training to become strong and successful athletes. But strength and success encompass more than just winning. Through practice, wrestlers come to embody a spectrum of moral virtues that are anchored in the material essence of the body. In this respect, celibacy is understood to be an integral component of physical exercise and diet, as all three regimens are intimately linked to the production and control of semen. Thus a regimen of dands (jack-knifing push-ups) and baithaks (deep-knee squats), along with jor (sparing), fuelled by a diet of almonds, ghee, and milk—each of which is symbolic of semen but also the material essence of condensed nutritional energy—produces resilient semen, and also produces a kind of virility that is expressed in terms of self-control.

Q In the West, yoga has some sexualised connotations, perhaps due to Orientalism—does your book break that myth?

A I think of myself as a mythologist rather than a myth buster. To bust myths is the flip side of the kind of intellectual hubris that produces nationalism, religious fundamentalism and other illusions of definitive truth. However, I take your point, since yoga is conceptualised in terms of many partial truths and is wrapped in layers of preconception. My goal is to try and make sense of yoga in relation to as many possible interpretations of what it is, and what people think it should be, rather than to try and conclusively define what it ‘is’. Because what it really is is the product of the most ingenious but illusive manifestation of conscious truth—the human imagination at work in the material world.

Q Tell us a little bit about ‘the problem of perfection’ you talk about.

A The problem of perfection is that the body is flawed.  It anchors one to the transitory experience of life and death.  But the imperfect body is the material means by which one tries to achieve a state of transcendence.

One of the things I find fascinating is the way in which the development of gymnastic yoga in India opens up a point of comparison with that bastion of masculine self-development— the classical Greek gymnasium. Sex and sexuality, concerning the flow and management of semen, is surprisingly close to the surface of the athletic body, whether one is living in the shadow of Mount Olympus or Mount Kailash.

Q Do you think some of these sexual traditions can act as a repressive force in today’s India?

A I think that any elaborate conceptualisation of the importance of semen in relation to experience can produce all kinds of attitudes toward sexuality, some extremely repressive and dangerous and others perhaps liberating and capable of transcending some of the more repressive articulations of heteronormativity.  But I am easily seduced by idealism.

It goes without saying that sexuality is about the kinetics of desire; that the sexual response cycle determines the logic of sexual experience.  But does it? It could be argued that modern sexuality is a repressive force on the essential nature of the body, and that much more can be made of semen by men, than semen makes of men in terms of sexuality, inhibited or uninhibited, hetero-normative or alternative.  What this argument can do is change the way we think about sexuality and repression.

Q Last but not least, from one man to another, is it healthy to hold in your semen for that long?

A I asked the same question of a young man who was riding on a bus with me up to Mussoorie. His answer: “Of course not, don’t be ridiculous!  Periodically you need to open the flow in the pipes so that they don’t get blocked.”  [He] was talking about sex, about the value of masturbation as a particular articulation of sexuality. But more fundamentally, he was talking about the fluid mechanics of regulated flow. Moral Materialism is really about trying to establish a different point of orientation for understanding the body in relation to male sexual physiology. The idea of sexuality is itself repressive, and there is always a degree of liberation in seeing things—especially material things—that are taken to have only one possible meaning in a new light.