Poet of the Mundane 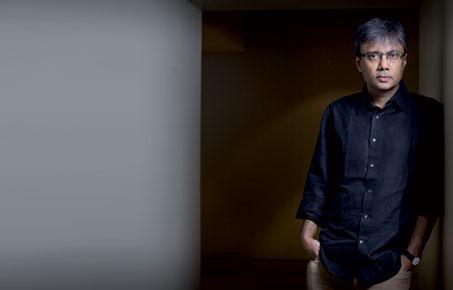 This is the story of Ananda, a 22-year old Indian man and an aspiring poet in exile, full of the usual contradictions. He is a student of English literature in London but at odds with the city. He reads poetry even in the bathroom, but despises novels. He has not bothered to read The Odyssey and though he has waded through Ulysses, he did not enjoy it, except briefly when a customs man at JFK discovered it in his luggage. Yet, with characteristic playfulness, Amit Chaudhuri layers over the persona of his protagonist that most inter-textual of archetypes, Odysseus.

Eighty something years after Leopold Bloom set out on his walk through Dublin, Ananda wakes up, meets his tutor, pays his rent, eats a sandwich, and takes the tube to meet up with his talkative, moody uncle Rangamama. The two of them eat dinner, and around the time an Ian McEwan novel would be climaxing with the revelation of a secret that changes everything, they buy laddoos and return to Ithaca.

To read Amit Chaudhuri, the acclaimed author of 12 books of fiction, non-fiction and poetry, is to set aside any expectation of something happening, of course. What is happening is nothing. Chaudhuri is a writer who pays special attention to ordinariness, not seeking to excavate the extraordinary within the ordinary as some writers might, not seeking spiritual epiphanies; but simply because the details of the ordinary exist and need to be recorded. Why does Ananda notice the florist by the Belsize Park tube station, ‘where someone behind the glass was harvesting bouquets for customers, choosing, bending, and embracing the flowers’? Because it’s there. Chaudhuri chooses and bends and embraces such details that bear no portentous meaning and the reader slows down with him, to choose and bend and embrace.

And it is this witnessing rather than any narrative cause- and-effect momentum that defines the pleasure of reading Chaudhuri’s work. Of Afternoon Raag, his acclaimed 1993 novel about an Oxford student, the critic Jonathan Coe wrote: ‘Chaudhuri has already proved that he can write better than just about anyone of his generation, and in that respect his first two novels are unlikely to be improved upon. The problem is the lack of a shaping narrative and… whether he will be able to carry on transferring to a new location every few years.’ Finally, with Odysseus Abroad, he triumphs.

Chaudhuri is a marvellous observer of place. Describing his characters’ geography is his forte; again and again, he will describe a place Ananda is passing through. The novel moves from Ananda’s bedroom, with its porous walls and unfriendly neighbours, to the streets of Bloomsbury to the deserted alleys of the English department. Shahnawaz Bhutto has died in mysterious circumstances and the Iranian Revolution is still a recent memory. Indians and Pakistanis in Britain have migrated from the ‘black’ category to the ‘Asian’ category. Margaret Thatcher. The smell of fenugreek in an Indian restaurant. The Jamaican music shop that, ‘without explanation or warning, would sometimes vibrate with music of simple, uncomplicated joy.’ The spaciousness of tube travel in the afternoon. The bed-sit where his uncle lives, the same one Ananda’s parents lived in when they were first married, in ‘the crowded bhadralok village’ of Belsize Park; the tall ungainly woman at King’s Cross station who solicits Ananda’s uncle and leaves Ananda feeling affronted that she hadn’t addressed him; the smell of his mother’s cooking in the kitchen, long after she has left for India, when he returns home.

It’s not easy to like Ananda immediately. One suspects him of prissiness. He spends a lot of time worrying about noisy flatmates. He has, after all, moved out of the hostel because ‘its drunkards and merrymakers—international students— were keeping Ananda from practising music’. When his uncle offers him a Coke, he declines the offer because it seems too scandalous a drink for afternoon. But what protagonist could possibly be charming and likable under the probing scrutiny of an author like Chaudhuri? This is a character on a tight leash. Every thought of Ananda’s is laid out for the reader. Every aside, every tangent is dissected. This is especially evident in how Chaudhuri writes dialogue. If we hear Ananda talking to someone, we also hear him thinking simultaneously; half-thoughts and counter-thoughts punctuate the dialogue, as, for instance, when he discusses his poetry with his tutor: ‘“It’s a difficult art,” said Mr Davidson—now he was softly addressing himself rather than admonishing Ananda, the prose writer recalling (perhaps from experience) the mysterious pitfalls of poetry-writing. “But what you do have is a grasp of rhythm,” he said—not grudging, but fair. “It was never something I could master!” So he had had the experience then!—he’d given verse a go. How little Ananda knew of him—yet had reached out to him as at a straw… Ananda decided to slip in a compliment—to prove he was superior to the little well-meaning jibes…’

There is a beat of silence after Nestor Davidson says to Ananda, “I must say you’re virry prolific!” and before he follows it up with “I did like these.” But in that beat, we see Ananda wondering about the ulterior motives of “very”, envying Philip Larkin for his lack of prolificness, and, half- regretfully, half-proudly, observing his own instinct ‘to recoil, to hide himself away, with a soul in spate, leaking, spilling over, overflowing eagerly in poems he wrote every week with such facility’. Thus, firmly lodged inside his mind, we begin liking him after all.

Ananda’s story becomes the story also of his parents and uncle and the series of migrations and counter-migrations that have brought him to London. And this is where the reference to Odysseus becomes less a post-modern irony and more of a rich and tantalising metaphor. Perhaps there is more than one Odysseus in this story. What better way to transform an epic warrior into an anti-hero than to indicate that he is not unique, his story not the only one?

We learn that his parents married in London after a protracted engagement. We hear two different versions of how the marriage came about—his uncle’s version and his mother’s. Before London entered the picture, his family moved from Sylhet to Shillong, and then to Calcutta and eventually to Bombay; over the course of a day in the life of Ananda, we get a multi-generational tangle of stories and allegiances. Yet, what is at stake here is nothing as crass as, excuse me, a plot. When Ananda and his uncle go out for dinner at the Gurkha Tandoori, a basement restaurant, a waiter greets them with “Table for Two?” in a Sylheti accent:

‘Careless with the ‘b’, pushing table close to te-vul. Ananda felt he was near home. Not home in Bombay: his parents didn’t speak Sylheti in that large-hearted peasant way; their accent was slightly gentrified. Not Warren Street of course. Not Sylhet, either—he’d never been there and didn’t particularly regret it. Maybe some notion of Sylhet imparted to him inadvertently by his parents and relations—as an emblem of the perennially recognisable… And the perennially comic.’

Chaudhuri is not exploring a narrative arc but a consciousness, one encompassing the long trail of a clan from Sylhet in undivided British India to London, the dwindling capital of a postcolonial empire. A consciousness that includes many divided literary loyalties, from his uncle’s love for Tagore and Bibhutibhushan to the intellectual allegiances of his tutors to Chaucer and Kristeva and Spencer. In the introduction to his 2008 book of critical essays Clearing a Space, Chaudhuri writes that it sought to explore the temperament of an Indian writer who ‘…doesn’t trace, as he probably should, his creative lineage to Salman Rushdie and the mandatory ‘hybrid’ post-colonial usages of English, but to a variety of, often conflicting, sources and forebears, including European and vernacular Indian… ’

Perhaps this is why Ananda walking through London in the mid-1980s seems to belong differently there than other Subcontinental emigrés. Midnight’s Children has won the Booker a few years ago and My Beautiful Laundrette has just released. But in exploring Ananda,Chaudhuri is interested less in identity and more in temperament. The postcolonial experience is definitely part of this temperament but so too is the fact that Ananda ‘would cross the street to avoid meeting the Victorians.’ And so we are treated to a passage on Ananda’s delight in modern literature: ‘Twentieth-century literature! With its narrow subject, modern man—strange creature! With his retinue of habits, like getting on to buses,secreting the bus ticket in his pocket, or going to the dentist… ’

Two hundred pages later, we are back in Ananda’s flat, laddoos in hand, uncle in tow. Two modern men, deeply self-conscious outsiders, flâneurs.In this last chapter, titled ‘Ithaca’, they discuss whether there will be a Shudrayuga, the age of the common man. The novel ends as they make another plan for another day like this one. And here, it is another poet who comes to mind, another exile of many migrations.

And if you find her poor, Ithaka won’t have fooled you.
Wise as you will have become, so full of experience,
you will have understood by then what these Ithakas mean.