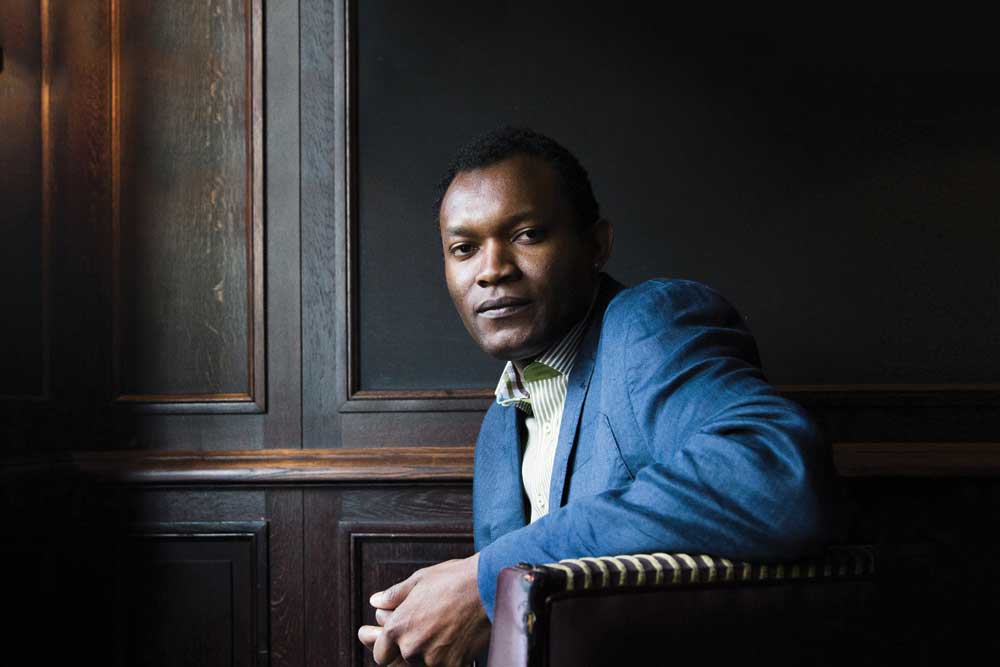 REQUIEM, ALIAS King Nzinga Nkuwu, alias Hitler, alias Negritudé, alias The Man Who Changes Water Into Vodka, is waiting at the half-built 19th century train station for his old friend Lucien. The station is ‘the only place on earth where you could hang yourself, defecate, blaspheme, fall into infatuation, and thieve without regard to prying eyes’. It is a place teeming with professors selling their lecture notes, intellectuals reeking of salted fish, Cuban musicians performing salsa…

Requiem feels he has better things to do than wait for a train that is running late, as they always do. He could instead go to the popular nightspot Tram 83, which has the appearance of a ‘true theatre, if not a massive circus’ and operates 24×7. When his old friend finally turns up, they embrace without enthusiasm. Requiem and Lucien have nearly nothing to talk about, despite, or perhaps because of, ten years of estrangement. But once, at university, they used to be close friends. There is also that obscure matter of Jacqueline, whom they definitely do not talk about—in fact, Requiem holds Lucien responsible for his divorce from her. So ideally, Requiem would like to destroy Lucien. But it is a Friday evening somewhere in Africa and this meeting of two former friends is the beginning of a lengthy story about debauchery.

The seamy seediness portrayed in the book is lent an almost lyrical quality by the frenetic writing style of Congolese debutant novelist Fiston Mwanza Mujila, who also writes poetry and plays in the French language. The expert translation by Roland Glasser helps—the novel reads almost as if it were written in English, save for one or two clunky expressions. No wonder then that it was longlisted for the Man Booker International Prize in 2016.

Frequently the author bursts into a catalogue style poem, an enumeration of things which serve to capture the bustling scenes of the unnamed African city where this story is set, ‘the smallest capital in the world, barely comprising a bar, the famous Tram, and the station’. It is a city where one cannot age, only exist. Every man for himself. People eat barbecued rats with chilli peppers for appetisers and dog kebabs with mustard for main course. ‘It’s a waste to be young in this part of equatorial Africa.’ You graduate to be an endlessly striking student or a desperado. But at Tram 83, everybody can have a good time on the cheap, rubbing shoulders with would-be bounty hunters, human organ dealers, soldiers’ widows, aphrodisiac vendors, Siamese twins, child soldiers with Kalashnikovs, and other riffraff, including the many foreigners working for various multinational companies, there to exploit Africa’s natural resources. That sleazy bar is where we too find ourselves a few pages into this pandemonium of a novel and to where the narrative keeps endlessly returning.

It is a place where, ‘when you got wasted, you didn’t return the empties, in order to avoid misunderstandings. The waitresses were inclined to tell you ten bottles instead of the three or five you actually ordered. No surprise to come across a guy with fifty empty bottles on his table…’ In the background a jazz combo shamelessly massacres a Coltrane number. The lynching of a beautiful melody.

While the text thus revels in itself, often delightfully, it makes for a somewhat painful read if one is used to more straightforward narratives. Occasionally it gets way too poetic, considering the subject matter: ‘Bottles were deflowered by the dozen to down the bitterness and disgust at living in a rotten world.’ So this is one book that should be read in the way that one would munch on cigarette butts at the end of a drinking binge, or perhaps experienced as if it were music, a rhythmic performance that just goes on and on. The writing can also make one think of Brechtian theatre, given the occasional chorus-like lines of dialogue, which of course isn’t surprising, considering that the author is a playwright as well. ‘Do you have the time?’ is the perpetual pickup line, repeated on almost every page.

At some point, as I was digesting a particularly juicy depiction of African squalor, I found myself wondering whom a book like this could be written for. Is it for foreigners like me, who like to dream about the exotic Africa? Or would it be read in Africa, by Africans? Almost as if anticipating that question, a few pages later, the novel itself provides an answer: ‘There are cities which don’t need literature: they are literature. They file past, chest thrust out, head on their shoulders. They are proud and full of confidence despite the garbage bags they cart around.’ This city, which reads like a poem or a song, is ‘written by her gigolos, her baby- chicks, her four-star whorehouses…’

But is Tram 83 about anything beyond sordid glitz, flashy prose and devil-may- care chutzpah? Perhaps it is the story of an unlikely companionship. Lucien wants to become a writer, but terrorists have forced him to burn the manuscript of the play about Africa he is working on. His latest public reading had ‘cost him a seventeen-month suspended sentence, with a two-year ban on practicing a profession, for aggravated assault, breaching national security, and planned and systematic incitement to revolt.’

Requiem is a petty criminal and wheeler-dealer. He has his own agenda to fulfil—while apparently helping Lucien get published, he is at the same time doing his quota of backstabbing. He doesn’t think much of Lucien, ‘a hypocrite scribbling on scraps of paper’. He knows what he’s doing, ‘that you can’t invent the wheel twice’, and sees himself as the future underworld don of this tiny African country; it will afford him recognition at Tram 83, where there will always be people ready to pick up his tab. Especially since he has a collection of dirty pictures with which he can extort almost anybody: every foreigner who picks up company for the night at Tram 83 is likely to become one of his victims. Or as Requiem says in one of his profound moments: ‘The tragedy is already written, we merely preface it. So let us preface.’

Before long, Lucien finds himself a semi-permanent guest at Requiem’s bachelor pad in an apartment building where people crap in the stairwell during power cuts. The pad sees a constant stream of girls with melon-breasts file past. Hangovers follow. Without really planning it that way, Lucien is back at Tram 83 almost every night, immersing himself deeper into Requiem’s territory. One night he meets Ferdinand Malingeau, head of Joy Train Publications, who says, ‘I’m concerned for the future of African literature in general. The main character in the African novel is always single, neurotic, perverse, depressive, childless, homeless, and overburdened with debt.’ Despite everything, the publisher embodies a certain hope for the budding writer.

To start with, Lucien gets an invitation to perform his texts at Tram 83, which, unfortunately, results in his getting viciously manhandled by the audience who feel that he’s showing off. ‘Someone suggested he be burnt alive. Someone said he was a spy, a police inspector… A girl with breasts wrinkled like socks even accused him of attempted rape…’ Lucien needs seventeen stitches and a long bed rest, during which he learns that Requiem has pinched the five thousand dollars the publisher had sent for his medical treatment. Meanwhile, Malingeau now feels he owns Lucien and keeps asking him to make changes in his Godot-like manuscript. He suggests reducing the number of characters from twenty to ten; when Lucien does just that, he wants them further reduced to two characters, then expanded back to twenty again. And instead of setting it at a train station in Africa, he wants the action shifted to Latin America, and orgy scenes added ‘to strike the right balance, in a purely Colombian context’. Eventually, thanks to Requiem’s scheming and criminal mindset, Lucien ends up in predictably bad trouble. It is not easy to be a writer in Africa.

But maybe this is not so much about Lucien as it is the story of Africa itself, or a small part of Africa, told through its own voice, or a close approximation thereof? It does aspire to authenticity and seems to display the frailties one imagines that small African countries suffer from. So, in Mujila, maybe the African continent has its Roberto Bolaño, a hard-boiled writer whose prose reads like poetry. ‘Do you have the time?’ Then do read this book.