Of Misery and Glory

The story of two photographers, Raghu Rai and Kishor Parekh, and their books on the birth of Bangladesh 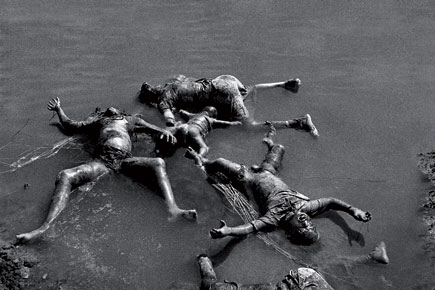 The story of two photographers, Raghu Rai and Kishor Parekh, and their books on the birth of Bangladesh


A couple of years ago, photographer Raghu Rai’s assistant came to him with an envelope he had discovered in a pile of material he was yet to archive. The envelope, tightly bound with tape and with ‘Bangladesh’ scribbled on it, contained negatives that Rai had given up for lost. His excitement was immense, for these were photographs he had taken just five years into the profession, “in his youthful madness”, as he says. They were of the first and only time he was on the frontlines of a war, the Indo-Pak Bangladesh War of 1971. The negatives, he was relieved to find, were still in ‘A-class’ condition.

What surprised him even more, he says, were the photographs themselves, the snapshots of suffering he had captured as millions of refugees from what was East Pakistan made their way across the border to India, some of them surviving murder, rape and other atrocities only to succumb to cholera and starvation: “a very intense and meaningful body of work” in Rai’s words, a body that he believes has stood the test of time.

But has it really? The large black-and-white and grainy images in The Price of Freedom (Niyogi Books, Rs 1,495, Pages: 115) , published this month, are mainly those of refugees walking desolately, their meagre belongings wrapped in cloth bundles, into the border areas of West Bengal, Tripura, Bihar, Assam and Meghalaya. Close-up portraits of creased faces with helplessly widened eyes. Women and children, barely a single piece of tattered cloth covering their frail bodies, trudging along with nothing left to say to one another. The more fortunate, the ones evidently used to the luxury of blouses and shirts, packed together in buses and bullock carts. The next lot is of Mukti Bahini fighters, those who fought a guerilla war against their oppressors (and with whom Rai had first crossed the border). And then of the battle fought by the Indian Army, and of the jubilation after Pakistan’s surrender.

As an eminent photographer, Raghu Rai has the comfort of knowing that every picture he puts out is of value just because it is his. And he is not in the habit of underselling himself. Twice during the course of our conversation, he points out that the Bangladesh photos were taken not only for The Statesman, the newspaper he was working for then, but also for foreign publications.

It could be the arrogance of knowing oneself to be among the world’s foremost photographers, or just an intense sense of competition, but he is clear that his pictures are in a league of their own. “When you see their works and mine, you will see the difference,” he says, referring to the other photographers whose works are featured alongside his in The Birth Pangs of a Nation, a book on the 1971 liberation brought out by the Bangladeshi photographer Shahidul Alam. “I am the only photographer to document [this event] so seriously,” he adds a while later. Rai is talking about the number of times he went to war-ravaged areas. In all, he spent a total of a month or more just covering the conflict.

Another Indian photographer who covered the war was Kishor Parekh, a man with a reputation of usually being the first lensman to a battlefield. He spent about ten days in East Pakistan, but his photo book on the exodus and genocide, Bangladesh: A Brutal Birth, published by Image Photographic Services in 1972, remains unmatched.

Parekh, who is credited with changing the face of Indian photojournalism during his years at The Hindustan Times starting in the 1960s, was working in Hong Kong when the 1971 war broke out. For someone who had earlier covered the Sino-Indian war of 1962, the conflict with Pakistan in 1965 and the Bihar famine of 1966-67, it was troubling, his son Swapan Parekh remembers his mother recounting, to be “sitting on a beach and painting while his country was burning”.

Unwilling to sit it out, and undaunted by his boss’ apathy towards a war raging far away, Parekh took off on his own, hitching a ride to the border, where he found a helicopter waiting to take accredited mediapersons across. Parekh did not qualify. Swapan, a photographer himself who has pieced together this story from accounts of his mother and father’s friends and colleagues, says his father simply barged his way in. “Take me or shoot me,” he told an Army major who was trying to stop him. He was taken on the condition that he would be on his own across the border.

Once in East Pakistan, he hitched rides on trucks, and on one occasion even got nabbed by the Indian Army on suspicion of being a Pakistani spy. Thanks to Parekh’s charm, this episode ended with the Army handing him a major’s uniform and inviting him to travel with them. It was during this time with the forces that Parekh and Rai were likely to have been together for a few days, leaving us a record of the same scenes seen through two different pairs of eyes.

A photograph is not just a story about a subject, it also reveals something about the person behind the lens. In barely a few days, Parekh had a comprehensive body of work, one that he was confident enough could hold together not just as a photo story for a newspaper but for an entire book. His photos of Bangladesh in the making, considered his best, are now iconic images imprinted on the minds of those who have seen them, even though the book is no longer in print. A young girl stopped short by the sight of a mutilated corpse on the road, her pursed lips seemingly swallowing a scream, her unblinking gaze unable to turn away from the horror of it. A wounded boy, naked chest down, crying as blood from his head gushes down his legs on to the road. The brutality of not just Pakistani soldiers, but India’s own (‘They had suffered casualties too’ as Parekh’s caption puts it) as they kick suspected Razakars or spies lined up against a wall, or check inside a man’s lungi—not for any sign of his religion, as this action has widely been misinterpreted as since, but for hidden weapons. Among other images, we see Mukti Bahini guerillas as they hunt down snipers on a deserted street, Pakistani army guns piled up like firewood after their surrender, and the surrender itself: humiliation writ large on the face of Pakistan’s Lieutenant General Niazi.

In Raghu Rai’s work, there is only one photo that scrapes its way to the hideous depths of the 1971 brutality: four bloated bodies lying spread-eagled in water, the one in the centre being of a face-down infant barely six months old. Rai’s images have served another purpose, though. At the time, he says, Pakistan’s propaganda on the world stage was stronger than India’s. Even Prime Minister Indira Gandhi did not believe the scale of migration till she travelled to the border areas and saw it for herself. Rai decided to exhibit his refugee series in Europe—in Prague and Paris, among other cities. “That’s when the Indian Government realised the power of photography,” he says. It got him a Padma Shri award in 1972. As for Parekh, the Government ordered 20,000 copies that year of his book as an “official documentation” of the war, as Swapan says.

As Bangladesh begins to convict those responsible for the atrocities of 1971, as Shahbag becomes the focal point of protestors seeking death for the guilty who have gotten away all these years, the emergence of Rai’s photographs is fortuitous. To protestors in Dhaka, such a photographic record is invaluable, especially since not many photographers within that country were able to save their images of the time.

Rai, however, sees archival photographs differently. “I have always fought with [Ebrahim] Alkazi that every old photograph can’t be put in a museum unless it has something substantial to share… We can’t celebrate mediocrity,” says Rai of the many photos he has seen put up at recent exhibitions of pre-Independence India (by Indian photographers Homai Vyarawalla and Kulwant Roy, for instance). What the world will remember of this time, he says, are the iconic pictures taken by Henri Cartier-Bresson and Margaret Bourke-White.

Maybe we should measure The Price of Freedom on the same scale that Rai uses for other archival works. As a piece of journalistic work, will his images stand apart like Parekh’s have over these years? Unlikely. Forty years after his book, Parekh’s work is as evocative as ever. The stocky photographer who always arrived first, who loved to beat his competition to the scene, has done it again.