Novelist of the Newsroom 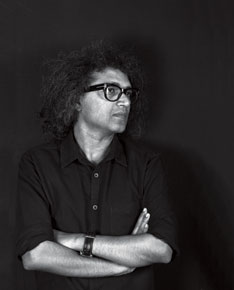 
“I think this book grew as I saw the changing city around me as an aggregate of spaces, shaping and shifting, the different worlds living right next door to each other,” says the writer-editor. “Through which people walk in and out at night, at day, all the time. I felt that somewhere in these spaces, something has to happen.” We meet in a room full of books at his home in Gurgaon’s Heritage City, one of the original upmarket housing colonies that form little islands in the NCR; almost consciously cut off from South Delhi’s corridors of power, though very much within the jugular of this future city of power.
A small-built, soft-spoken man dressed all in black, Raj Kamal Jha is reading Visitation, German novelist Jenny Erpenbeck’s lyrical novel set in Brandenburg, and wears a bowler hat over a frizzy mane—perhaps evoking Berlin, where he recently spent a year writing. He says he likes to spend his weekends with his eight-year-old son Rain (the boy runs in during our conversation to look for DVDs in his section of the bookshelves), far from The Indian Express office on Bahadur Shah Zafar Marg and indeed from literary parties.

Former colleagues say he wears the hat even in the office, and describe him as the classic four-pack-a-day journalist, smoking incessantly yet somehow halcyon amidst the edgy energy of his reporters. “I love solitude, being in a bubble in which you lock yourself up, and my job gives me that,” he says. “I’m essentially an editor who sits behind a desk and deals with the story and the storyteller. Novels to me also provide a similar space… personal, alone with my characters.”

Born in Bhagalpur, Bihar, and raised in Calcutta, whose culture took him wholly into his embrace—his wife is Bengali—Jha studied mechanical engineering at the Indian Institute of Technology (IIT), Kharagpur, and then journalism at the University of Southern California, Los Angeles, serving as assistant editor at The Statesman and senior associate editor at India Today at different points in his career, and joining The Indian Express as deputy editor (operations) in 1996. Over two decades in the profession have created a legacy of reporters who carry his credo of strong storytelling, culminating with his present position last year. As Chief Editor of one of India’s finest newspapers, Jha plays midwife to the stories of the nation, from pitch through to broadsheet. In the middle of this cycle, or perhaps running parallel to it, appear his own stories, very much a product of the world of the newsroom even as they necessarily stand apart from it: the product of a dreamer and a realist, both.

Not everyone’s kind of tales, they are dense and surreal, contain dark, brooding, even repugnant elements— his breakout novel, The Blue Bedspread (2001), which won the Commonwealth Writers’ Prize for a first book, deals with incest and child abuse, for example. Following in the tradition of If You Are Afraid of Heights (2003), featuring the rape of a young girl, among other modern evils, and Fireproof (2006), giving voice to the ghosts of the horrific communal violence in Gujarat in 2002, his fourth novel, She Will Build Him a City (Bloomsbury, 354 pages), does not flinch from the ‘New India’ apparent in Delhi. After all, it is the lifeblood of his newsroom, and of our modern imaginations. The narrative belongs to a mother and her sleeping daughter; a young man who cannot stand his privilege or the misery outside; a newborn boy who is left at an orphanage and finds his own way. Producing the kind of intense, sustained catalogue of violence that today’s sub-genre of headline fiction conjures up, it achieves a poetic rhythm in its tripartite narrative structure of Man, Woman and Child, as well as in the prose and prosody itself:

‘The station is crowded, he closes his eyes, sees everyone naked and bruised.
Deep gashes scour bare stomachs and thighs like mouths of brown bags slit open.
Women squat on haunches blowing air into wrinkled penises.
Like children with balloons.’

This kind of anonymous yet particular scenario predicates the action in Jha’s novels. “I usually begin with a scene, a couple of scenes, that are born and then sit inside my head, then they start to grow… almost like a disease,” says Jha. “But your health depends on that disease, your very existence.”

Indeed, the novelist cannot afford to be squeamish about the modern contagion of violence, like the journalist. There is a constant litany of numbers, appearing almost to will this into context: 20 million bodies in the city, 29,468 people per sq km in the city, 6,275 sq feet of carpet in Man’s six-room apartment, Rs 32, 540 a night at The Leela, 1.5 million patients at the All India Institute of Medical Sciences (AIIMS). Like many of the capital’s new entrants, ‘Man’ is ‘going to kill and he is going to die’.

There is some sickeningly visceral violence, accordingly; a rape scene that is all too familiar, terribly immediate imaginings of violence on the part of a young man riding the Metro: ‘He likes poetry, he doesn’t like wet, he doesn’t like spray or spatter. No knife, no thick rope, no iron rods, the most popular weapons behind the headline murders in this city. Of Aarushi the schoolgirl; mother Gurpreet and daughter Jasmeen; French tourist Lauren; Afghan woman Paimana and the elderly couple in Greater Kailash I, most of them stabbed, cut in many. Or strangled, bludgeoned. Won’t work for him because he knows his arms lack strength and even if he gathers enough force to hit, it’s unlikely he will kill with the first blow which means he will have to keep hitting and, in the process, smear and stain larger areas. Perhaps, provoke a scream.’

How often do you get to tell the story of a well-off guy who plots so much violence, I ask him; how often do we see this kind of unusual hero?

“I like him, though,” Jha says, acknowledging the character’s uniqueness as he laughs, “the Man, as much as the other characters. Also, because I think he is slowly being swallowed by guilt. There is a conscience inside him but it is completely buried under lots of bullshit. I think there is, in his inner being, a certain element that appeals to the goodness of people as well. I think for a generation of us, who came of age before India did, before India opened up, who have seen different worlds—to put it very simply, those of us who live more comfortable lives than our parents did, just because of pure economics and pure chance—there can be many responses to inequality. You use analytical tools to understand it, there are explanations in economics and philosophy and political science, which is what we use in the newsroom. Then, there is the response that’s completely from-the-gut, at the pure visceral, conscience level, where you have no rationality. That’s guilt, that guilt can be overwhelming. Guilt can also be a very healthy impulse.”

Also almost ingrown, causing these kinds of violence, I remark. “Yes. It is, but I like the fact that he is the only one in the gang of four friends who is uncomfortable with what they do to the dog. And he is the only guy who has the capacity to watch the dog fly. In a way, he is the one whose life ends rather brutally (“without giving the book away”, he says in an aside); he’s not a villain in my book.”

What was it like to write in the voice of a woman? As a mother? “When I was writing her, it never struck me, her woman-ness. It was more her mother-ness. Perhaps, you don’t always have to be a woman to be a mother. The mother in the book also stands for the healing power of history,” says Jha, who may revisit this voice in his next book. “That history can heal is important to me as an idea as well at a time in the country when you have almost half a billion people under the age of 25. Whenever there is a noisy argument, be it in newspaper pages or at 9 pm on TV or on social media, if you interject with history, with facts and a frame of reference, it becomes so much saner; if you do a Google check, so much of our passionate outrage would just evaporate.”

Is it necessary to be both a novelist and a journalist today? “Maybe not, but to me, there is no other way,” says Jha, who has been awarded fellowships at the Yaddo Residency in New York and the Berliner Künstlerprogramm. “I have to do both.” He manages the punishing routine of a newspaper editor, but the year off seems to have helped in many ways; he describes how a moment in the book came together with a particular image on a particular Berlin street. The desk job and the writerly vocation remain separate, however; “As I grow older, I realise there are some stories that need the rigour of fact and some that need the freedom of fiction.”

The kind of interviewee who elicits a considerable amount of information from you in proportion to what you set out to extract from him—he knows more about my weekend and reading, through a gentle line of questioning, than I probably know about his, at the end of our hour—Jha is eminently curious. He discusses lesser-known authors in Francis Ford Coppola’s magazine Zoetrope, Stephen King and the work of New Zealander screenwriter-director Jane Campion, who gave us modern classics like The Piano.

Amit Chaudhuri has referred to a cinematic quality reminiscent of Tarkovsky and Almodóvar, I remind him; has he ever thought about writing a screenplay?

“The dark spaces in a cinema hall are a favourite,” he remarked earlier, but he insists, “I am not skilled in the tools of that kind of storytelling. Of course, I love cinema. But I very strongly agree with what Paul Auster says about the special nature of the novel. That it’s the only space where strangers can meet in absolute intimacy, that the reader and the writer make the novel together. You can’t do this with any other art. This is relevant now more than ever, when there are very few such spaces, where people know everything about where you are. The only thing left untouched and unknown is what’s inside your head.”