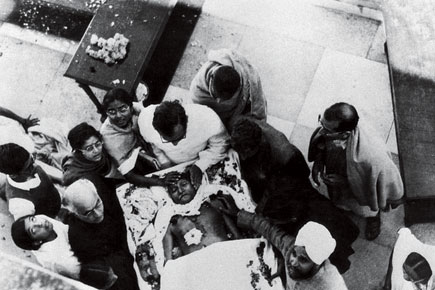 In the 80s, the German historian Gerhard Schreiber wrote, ‘We are not finished with Hitler’. We too, in India, are not done. Either with Gandhi or with Godse.

In his latest book, The Death & Afterlife of Mahatma Gandhi, poet and writer Makarand Paranjape wants us to reconsider Gandhi’s life and our idea of India by inquiring into his death. The first part, ‘Birth traumas of the nation’, is a series of bold, essay-like chapters, wherein the author argues that the twin traumas of the Partition of the Subcontinent and the assassination of the Mahatma were so unbearable that they were repressed in India’s Hindu psyche. They were traumatic because Mother India had been vivisected and one of her patriotic sons had committed patricide by killing the Father of the Nation. Instead of being confronted, these Oedipal acts were buried in an officialised memorialisation of his life. Drawing from psychoanalysis and literary myths, Paranjape explicates notions of haunting, polluting and guilt, and also examines the plethora of writing and films on Gandhi.

Who killed Gandhi? Paranjape’s reasoning takes the edge off a wilful act of Nathuram Godse, a ‘misguided Hindu activist’, supported by ‘a particular political group’ (named elsewhere as the Hindu Mahasabha) and widens the circle of responsibility to ‘larger historical, political and ideological forces’. Of these forces only ‘the complicity of the entire Congress Party’ is discussed at length; the Congress Party is derided for making Gandhi irrelevant, for failing to protect him, for making Raj Ghat, the site of his samadhi, a sarkari memorial, and for its own pseudo-secularism. A justifiable attack, but it is useful to remember that Gandhi insisted that he not be protected, despite earlier attempts on his life. According to the many religious and literary texts Paranjape quotes, Godse’s deed becomes ‘a radically modern action by a radically modern Hindu’ because he breaks with past Indian tradition in which patricide has never occurred. A fascinating chapter on guilt draws on Karl Jaspers’ lectures on the guilt of Germany at the end of World War II, and Paranjape exhorts us, along with Jaspers, to purify ourselves (we who are all complicit in this tragic event) by accepting ‘our share of the guilt that accrues from the extent that we participated or continue to participate in violent hatred against other communities and in religious intolerance’. The act is also a ‘pollution’ which fractures the ‘spirit of the nation from the Hindu point of view’. But is there a Dalit or Muslim or a feminist point of view? Not all of us are culpable and it is the RSS, the Hindu Mahasabha and the Chitpavans of Poona, a community to which Paranjape himself belongs and some of whose members continue to glorify Godse, that must purge themselves.

The second part of the book, ‘My death is my message: Mahatma, the last 133 days’, narrates what Gandhi did during these last days when his ‘beliefs, principles and basis for living were sorely tested’. While Gandhi dies many times, he can live too, the author asserts. Just as he does in Lage Raho Munna Bhai, as a friendly neighbourhood ghost, or as ‘an enduring, challenging and even vexing presence in the national consciousness’. But despite many adherents, Gandhi’s ideals have been resoundingly rejected by development gurus, Dalits, many Marxists and by India’s new middle classes-as-consumers, and forgotten by most others.

Ultimately, Paranjape’s book remains a largely ahistorical study simply because, while it alludes to some of the wider historical context, it does not solidly locate Gandhi at the centre of some of the most powerful political and economic forces raging across the Subcontinent after 1935. His passing references to past and present events are too simplistic to be useful. And dangerous. Towards the end of the epilogue, written, along with the prologue, especially for this Indian edition, he is already wondering if the current ‘majoritarian political formation’ will be more effective in guaranteeing the rights of minorities, if ‘Hindutva-Hinduism’ (the same ideology that produced Godse) will be ‘a better guarantor of religious and cultural pluralism’, and if a more militaristic India will ensure better relations with Pakistan. There are, moreover, many methodological challenges to using psychoanalysis in the service of history, but Paranjape does not acknowledge them. Freud himself said that, like the interpretation of dreams without associations, only a layman could expect much worth from it.