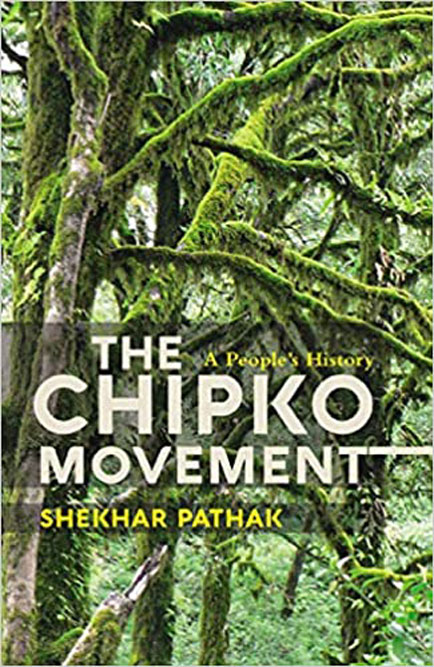 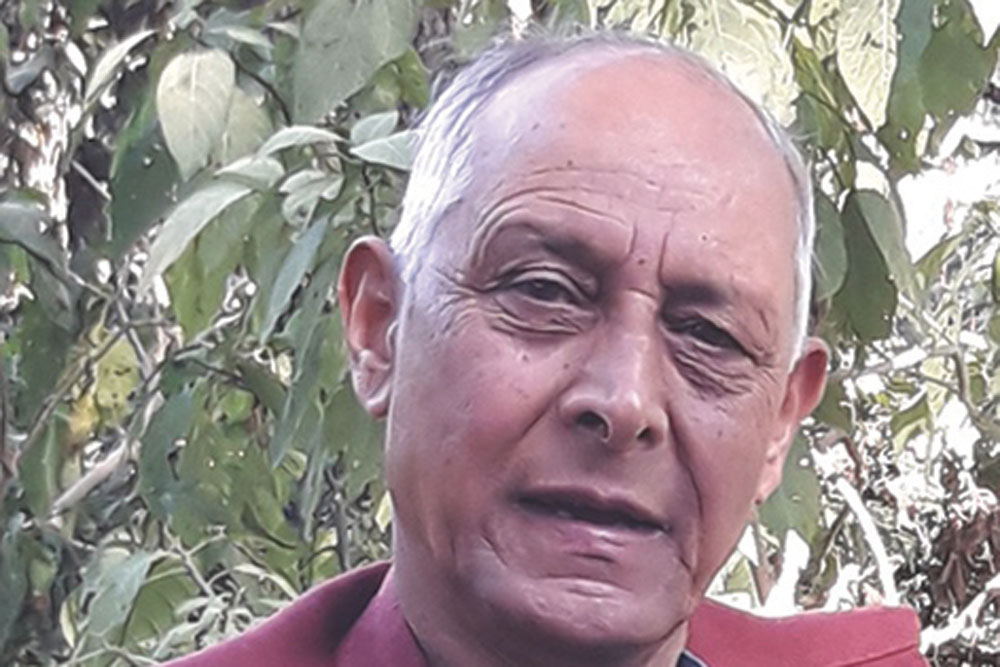 
In 1989, Ramachandra Guha’s The Unquiet Woods, a history of forest protests in Uttarakhand from the late 19th century to the late 20th century, was published. As Guha wrote in the preface, the Chipko movement was “a small though undoubtedly distinguished part” of these protests. To this disclaimer he added a footnote, which read: “The definitive history of the Chipko Andolan is currently being written by Dr Shekhar Pathak of the Kumaun University, a person uniquely qualified for the task; for he is perhaps the leading historian of modern Uttarakhand and an activist in Chipko from its inception in 1973.”

Over the next three decades, Pathak continued to collect archival material and talk to fellow Chipko activists for this massive undertaking. In the meanwhile, he built an admirable career as a writer of Hindi travelogues, essays and histories (like the three-volume set Asia Ki Peeth Par, based on the life and works of explorer Nain Singh Rawat) Finally, in 2019, Vani Prakashan published Pathak’s finished (Hindi) book, Hari Bhari Umeed: Chipko Andolan aur Anya Jangalat Pratirodho ki Parampara.  Last week, the English-language version of the book, The Chipko Movement: A People’s History, (published by Permanent Black and translated into English by Manisha Chaudhry) won the Kamladevi Chattopadhyay New India Foundation Book Prize 2022. The Chipko Andolan deserved a definitive, thorough, rigorously researched chronicle, one which cut through the PR and the hype effectively, and in A People’s History it’s received exactly that. Although the phrase has kind of lost its edge in recent years, I’d call this book a true ‘labour of love’. During telephonic and email conversations, Pathak spoke about this long-gestating project, some of the most significant achievements of the Chipko Andolan—and the problems that continue to persist for the residents of Himalayan regions.

“Today, we have a biodiversity board, and in the central ministry of environment even a climate change division is added,” Pathak says. “But there were failures in implementing these new policies. The mindset of some leaders, departments and officers has not changed much. Today the problem is further complicated, as privatisation has gone up and corporations are influencing the government decisions. There is increasing pressure on natural resources. All efforts are being made to dilute the EIA (Environmental Impact Assessment) process. By doing this, all-weather roads are being built in the Himalayas. Displacement of soil and communities has increased.”

Throughout the book, Pathak does an excellent job of connecting the geographical realities of Uttarakhand and the spate of policy failures the region has endured for over a century now. It’s been a case of one clueless government official after another, ignorant of the people’s plight and anxious to deploy one-size-fits-all policies that fail to acknowledge the uniqueness of Uttarakhand. As he writes in the opening chapter, “The geography of Uttarakhand has shaped the mental and physical attributes of its inhabitants. In this northern state, though nature can be found at its most beautiful, its spartan and frightening aspects are seldom obscured. The homes of peasants and small-town dwellers frequently nestle in sylvan and foliage-full environments, but the people within them mostly live a life of hard struggle. The past two centuries has seen an onslaught on local resources, and this has led to the present economy of dependence.”

One of the most impressive aspects of Pathak’s research is that he isn’t merely content with documenting newspaper reports and official documents about Chipko. He is every bit as interested in the cultural life of the movement, the songs and slogans and poems that grew out of the resistance and in many cases, became shorthand for the movement itself.

He says, “Since the Jungle Satyagraha of the first two decades of the 20th century so many impressive slogans have been created by the community through creative people. From Chamoli, emerged, ‘Wan Jage Wanwasi Jage,’ from Almora emerged, ‘Jungle Par Janta Ka Haq Hai’ and finally from Jajal emerged, ‘Kya Hain Jungle ke Upkar.’ All these express the essence and diversity of Chipko. They were created by some people of imagination in the Chipko movement but these were also the collective expressions from the hearts of the people.”


“In these times of climatic changes, which are visible everywhere on the planet earth, we need both sensitivity and sensibility together,” says ~ Shekhar Pathak, author

The section where Pathak describes the pre-Independence protests in the region is similarly instructive. Through newspaper clippings, public statements, interviews, song lyrics and a wealth of other archival material, he builds a continuum of forest-centric protests where Chipko actually only comes in towards the end; the people of Uttarakhand have a long and illustrious history of standing up for their rights, challenging governments and refusing to cede ground. For example, the following passage describes a prolific period of large-scale protests in the region through the 1920s; eventually, the colonial government had to listen. “The anger against forest regulations was not restricted to words; rather, it was assuming the form of direct action. Pine forests and resin depots were set on fire. Forest Department coolies were stopped from tapping resin and carrying sleepers. The laws regulating human and cattle access state reserves were regularly and routinely violated. Forest officials were threatened, abused and on occasion physically attacked. The protests alarmed the government because Uttarakhand was both a strategically important border region and the source of fine soldiers for the imperial army.”

One of the major points put across by the book is that the ‘economy vs ecology’ debate—when it comes to the Kumaon region—is a specious one, framed in bad faith and designed to serve capitalist purposes. Economic development and ecological balance are not, in fact, in an adversarial relationship with one another. What successive generations of policymakers failed to acknowledge is that the model of economic development they used in the plains cannot be retrofitted for the mountains as well. This ‘economy vs ecology’ bad-faith framing is clearly a sore spot for Pathak, for it resurfaces in the final section of the book, where he writes these brisk, entertaining and succinct profiles (no more than half a page or so, in most cases) of some leading Chipko activists. In the passage about Sunderlal Bahuguna, Pathak criticises him for rehashing the ‘economy vs ecology’ debate. “Sunderlal Bahuguna was an influential messenger for Chipko. However, by making a facile distinction between the ecological and economic aspects of the struggle, and by encouraging a cult of personality around himself, he damaged and divided the movement. Meanwhile, his more self-effacing wife continued to work selflessly. She was continuously active in the Badiyargarh agitation and threw herself into the Tehri movement. While staying in her husband’s shadow, Vimala Bahuguna remained true to the teachings of the Lakshmi Ashram.”

The point about Bahuguna and the ‘cult of personality’ around him is also significant in other ways. A lot of the people Pathak profiles in this section—and, indeed, across this book—are women, many are from socially disadvantaged communities. This is one of the stated objectives of A People’s Life; Pathak felt that Bahuguna and some other charismatic upper-caste leaders (not to mention opportunistic activists who don’t even belong to the region) had hijacked the discourse around Chipko, projecting a terminology and talking points that had very little to do with actual, everyday problems faced by the general populace.

“Misrepresentations damaged the cause to some extent,” Pathak says. “It slowed down the process but never stopped it. They all realised at the end the importance and connectedness of economic and ecological aspects. When Sunderlal Bahuguna said, “ecology is a permanent economy,” he reached back to the point where conflicts were not there (within the movement). These (conflicts) always happen with social movements and on many occasions, even Gandhi could not solve them. Within the Gandhian tradition, one can find diversity in leadership and organisational capabilities.”

Despite its clear-eyed historian’s gaze, A People’s History is not a doomsday book. It refuses to make a virtue out of pessimism. Instead, it urges the reader to direct the tough and pointed questions at their elected representatives; perhaps this is the starting point of any revolution, even one so decentralised and organic as the Chipko Andolan.

“In these times of climatic changes, which are visible everywhere on the planet earth, we need both sensitivity and sensibility together,” Pathak says. “The existing model of development cannot lead to sustainability and equity. We must think about alternative models. In different ecoregions we can have different models and these decentralised models will lead to a national thinking about development.”